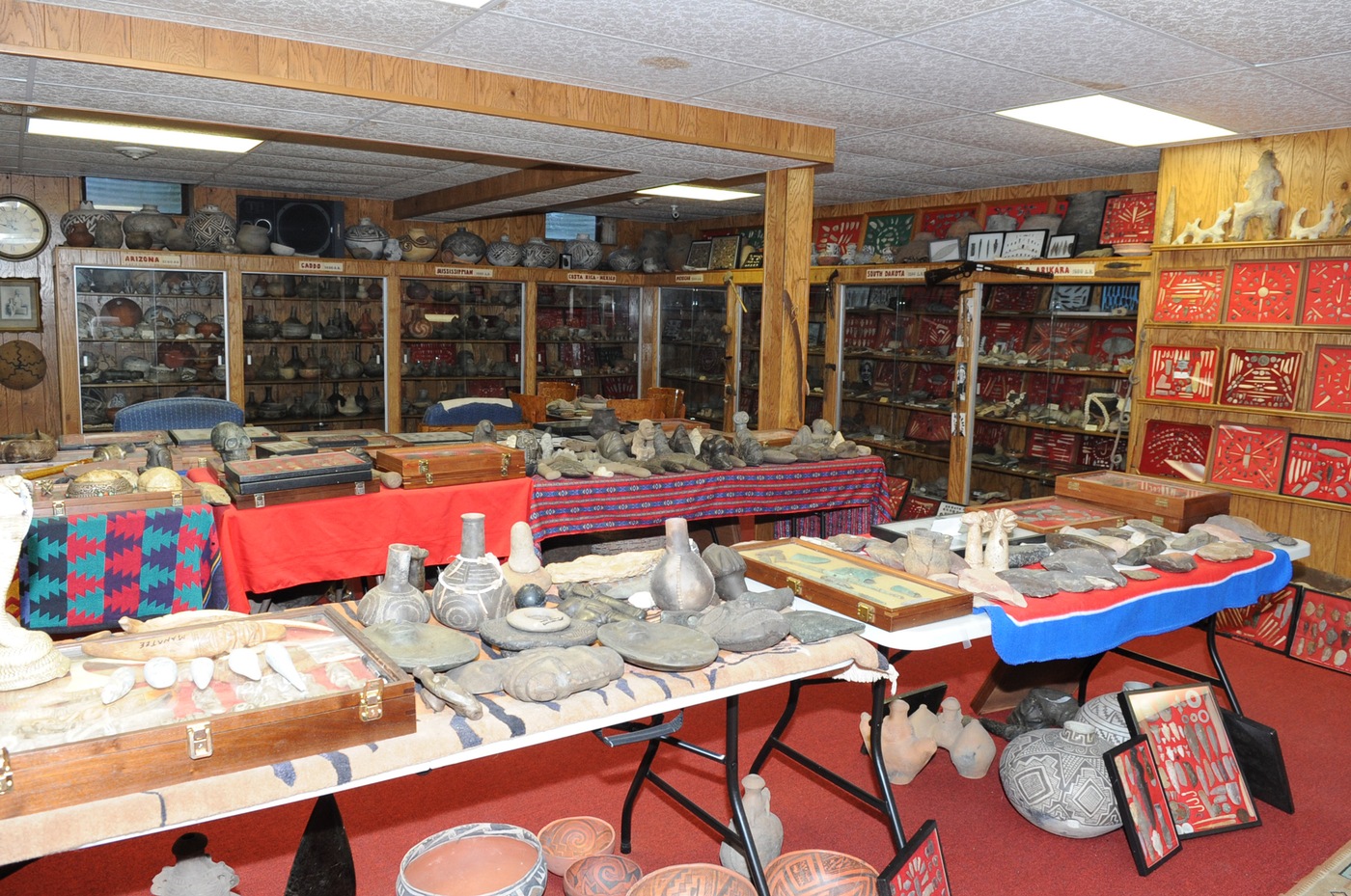 Artifacts on display at Don Miller's farm in 2014. For more than seven decades, Miller unearthed cultural artifacts from North America, South America, Asia, the Caribbean, and in Indo-Pacific regions such as Papua New Guinea.

Four years ago, after an operation in rural Indiana resulted in the largest single recovery of cultural property in FBI history, the Bureau’s Art Crime Team faced an unprecedented challenge: how to identify the rightful owners of more than 7,000 seized artifacts that came from locations spanning the globe.

The efforts to identify and repatriate the cultural property—which included approximately 500 sets of human remains looted largely from Native American burial grounds—is ongoing, and the FBI is now publicizing the case, along with an invitation-only website detailing the items, in the hopes of gaining further assistance from governments around the world and from Native American tribes.

“There is no single expert that can tell us everything we need to know about all of this material,” said Special Agent Tim Carpenter, who oversees the FBI’s art theft program and who led the 2014 recovery effort in Indiana. “This case requires the FBI to go out and seek assistance from many experts in the field.”

The seized artifacts and human remains were part of a much larger collection amassed by Don Miller, a renowned scientist who helped build the first atomic bomb and a globetrotting amateur archaeologist whose passion for collecting sometimes crossed the line into illegality and outright looting.

For more than seven decades, Miller unearthed cultural artifacts from North America, South America, Asia, the Caribbean, and in Indo-Pacific regions such as Papua New Guinea. A Ming Dynasty vase or intricate Italian mosaic might be on display in his home alongside Civil War and Revolutionary War items.

“Don would collect pretty much anything,” Carpenter said. “He collected from just about every corner of the globe.” Areas of his Waldron, Indiana, farmhouse where he displayed many of the approximately 42,000 items in his collection were stacked “floor to ceiling” with material, Carpenter said. “But his passion, I think, was Native American cultural goods.”

“This case requires the FBI to go out and seek assistance from many experts in the field.”

The FBI's Art Crime Team is trying to identify the rightful owners of more than 7,000 artifacts seized in Indiana that came from locations spanning the globe.

Although Miller opened his home over the years to school groups and others wishing to view his collection, he mostly kept hidden hundreds of human remains. A tip to the FBI in 2013 that he had such remains led Carpenter to his door.

A year before his death at the age of 91, Miller agreed to relinquish items he had likely acquired in violation of state and federal law and international treaties. “He cooperated with us throughout the course of the investigation,” Carpenter said, “and it was his wish that we take these objects and return them to their rightful owners, and for the Native American ancestors to be reburied appropriately.”

During a painstaking, six-day recovery operation in 2014, the FBI took possession of 7,000 items.

“It was a very complex operation,” Carpenter recalled. “We are not treating this material as simply evidence. These objects are historically, culturally, and spiritually important, and you have to take that into consideration.” He added, “We are dealing in many cases with objects that are thousands of years old. So imagine a scenario where you take an artifact that was created 4,000 years ago, survived in the ground or a tomb, survived being looted, survived being transported to the United States, has been in this guy’s house for the last 60 years, and the FBI comes along and we pick it up and we stumble and we drop it and we break it. That’s a pretty bad day.”

In many ways, he said, “we had to learn to become a museum.” Until the FBI can identify the rightful owners and repatriate the items—a task made more difficult because Miller did not keep detailed records—“we have to care for and curate these pieces like any museum would.”

To accomplish that, the Bureau partnered with tribal authorities and academic experts early on, consulting with archaeologists, anthropologists, and tribal experts on how to handle and care for the objects and human remains, and how best to locate their rightful owners.

The FBI leased space in a facility near Indianapolis where all the material is housed securely and temperature, humidity, and light levels are controlled. A team of anthropology and museum studies graduate students from Indiana University-Purdue University in Indianapolis (IUPUI ) helps to curate the items and prepare them for shipping when repatriation occurs.

“My students work diligently to make sure that each piece is properly rehoused before it is shipped back to its homeland or to its proper country,” said Holly Cusack-McVeigh, a professor of anthropology and museum studies at IUPUI. “We make sure that nothing is just thrown in a checked bag and tossed into the belly of an airplane. Everything is handled with the utmost care. 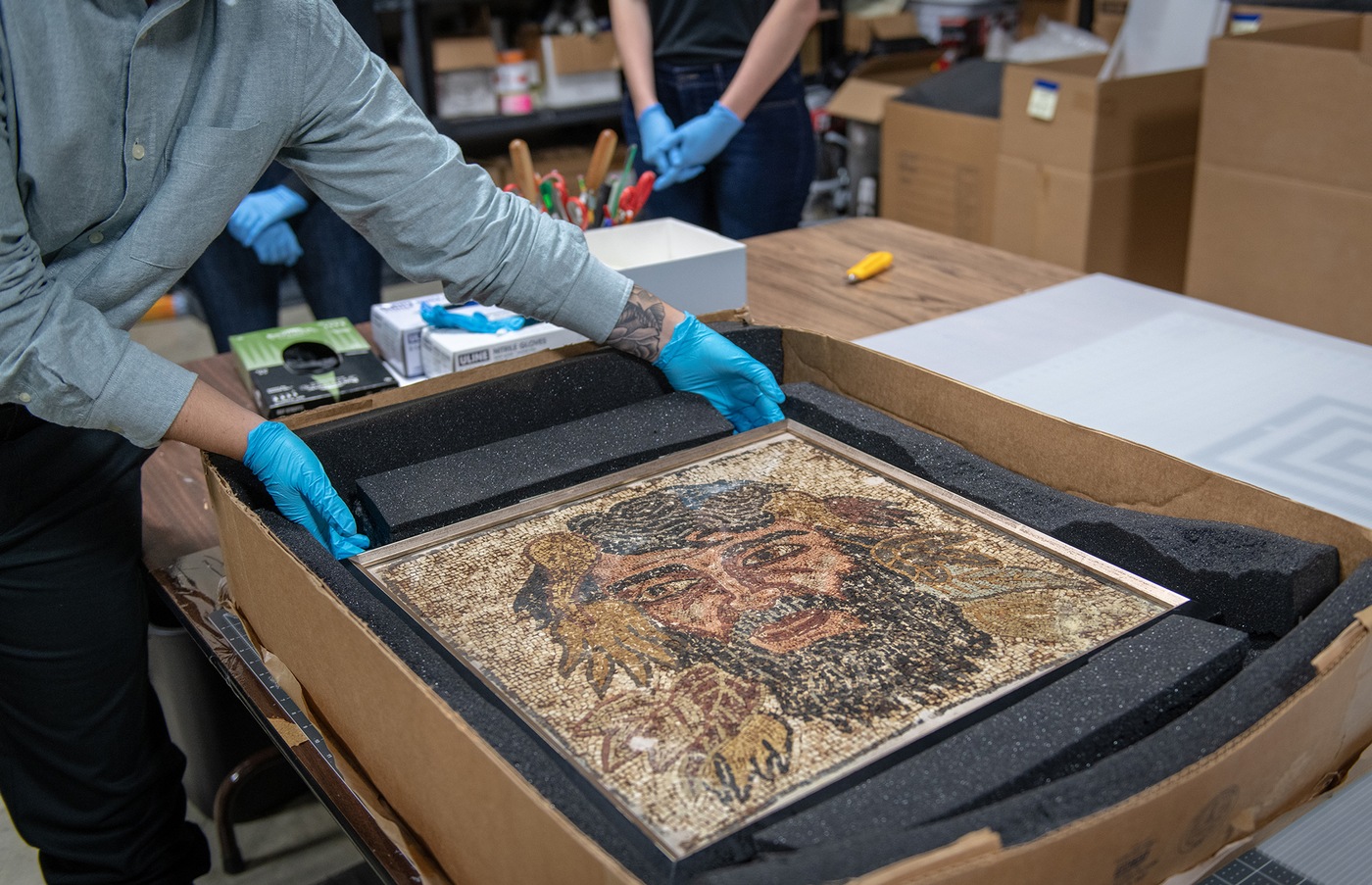 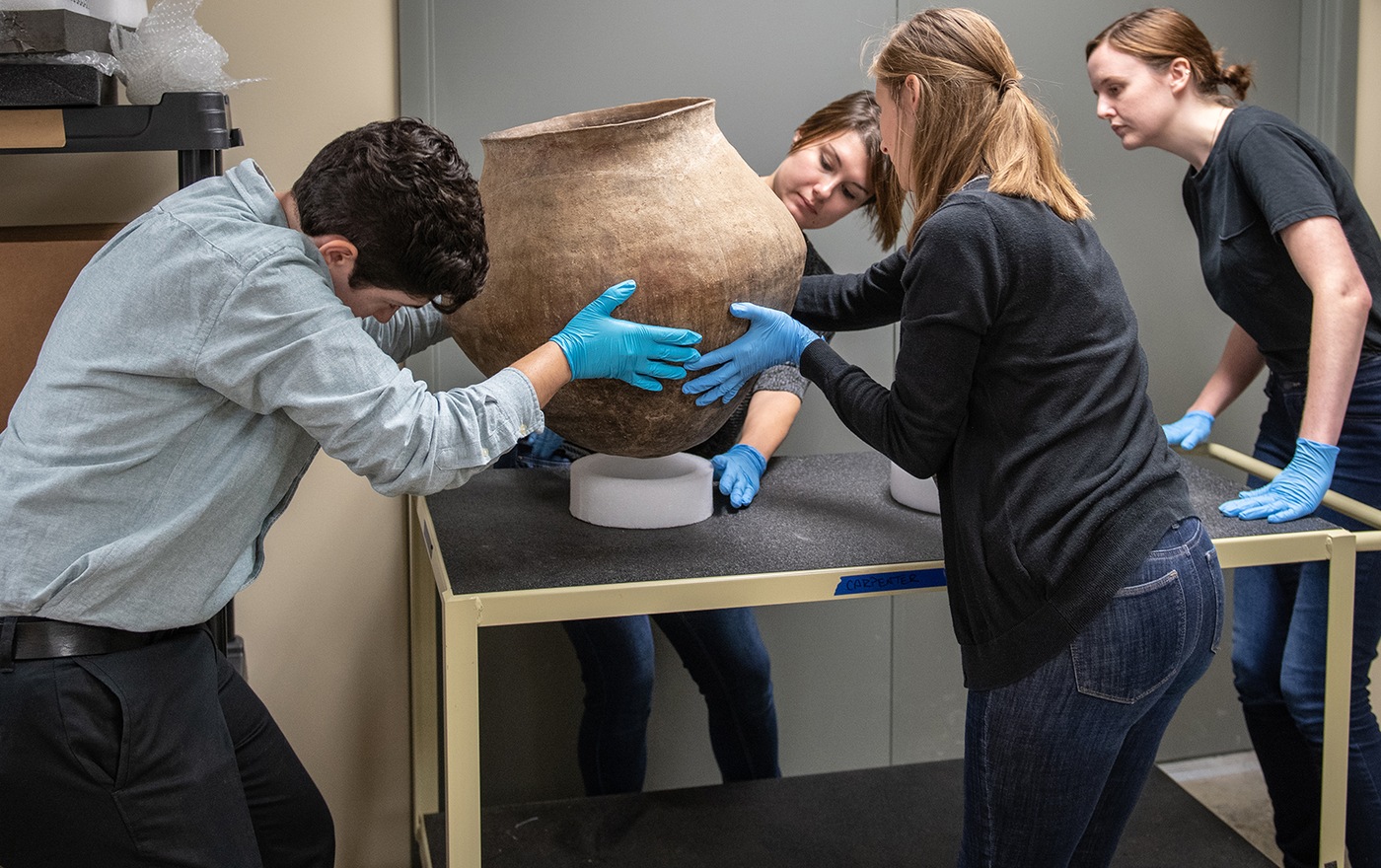 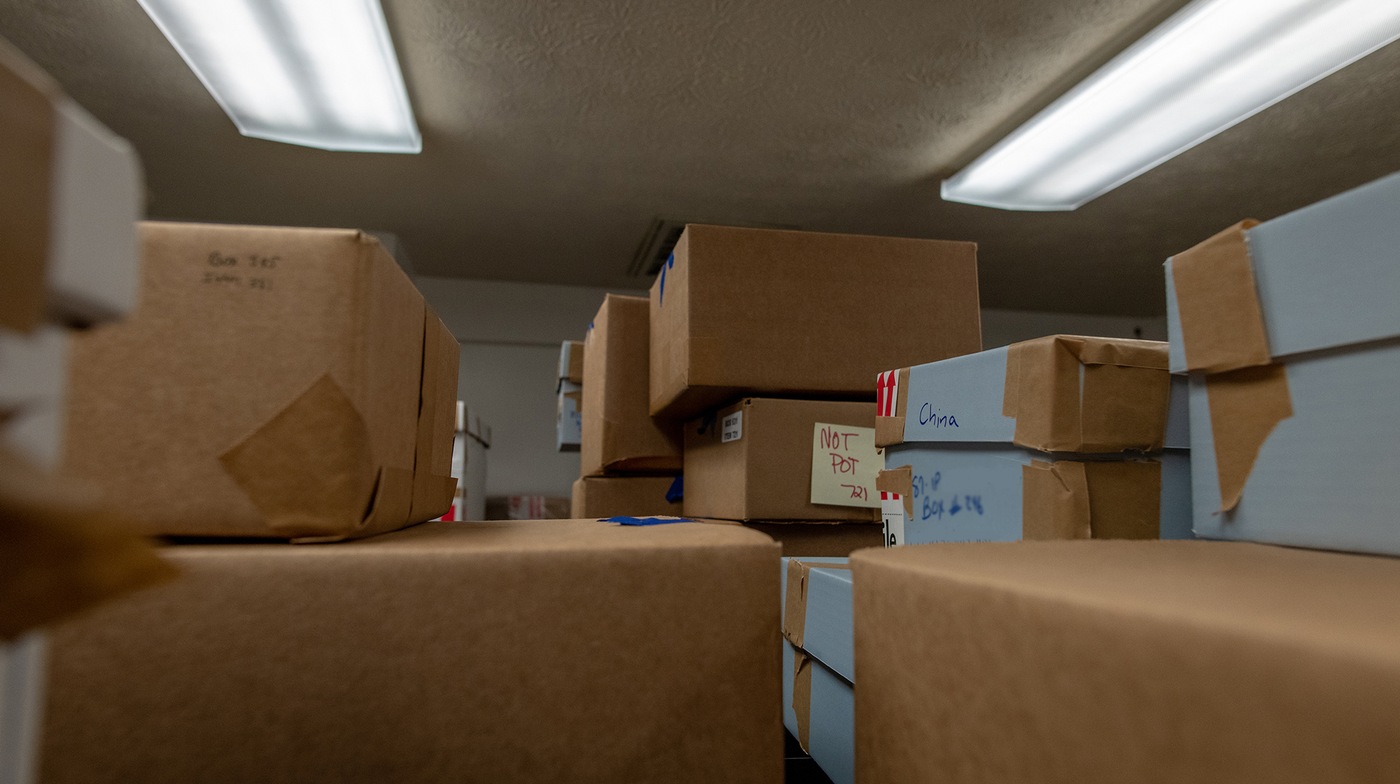 Museum studies graduate students from Indiana University-Purdue University Indianapolis (IUPUI) help care for the recovered artifacts in a facility near Indianapolis where all the recovered artifacts are housed securely and temperature, humidity, and light levels are controlled. Students and highly trained IUPUI staff also help prepare the artifacts for shipping when repatriation occurs.

In addition to her background in anthropology and museum studies, Cusack-McVeigh has a deep knowledge of Native American culture and has been an invaluable partner to the FBI regarding the Miller artifacts, particularly the handling and repatriation of Native American human remains.

Cusack-McVeigh took part in the six-day recovery operation in 2014 and recalled that no one on the team was expecting to discover hundreds of remains. “The FBI immediately understood that these are human beings and we can't treat them like inanimate objects,” she said. “They need to be treated with respect and dignity, and the FBI took that very seriously.”

Pete Coffey, who represents three affiliated North American tribes—the Mandan, the Hidatsa, and the Arikara—said he has “nothing but praise” for the agents who worked on the Miller case. “They made sure that the tribal representatives were included in all aspects of the repatriations,” he said. “They were very forthcoming with regard to procedures and policy.”

The affiliated tribes Coffee represents, known as the MHA Nation, were historically farmers along the Missouri River bottomlands. He has taken part in reburial ceremonies involving repatriated remains from the Miller collection and explained that in his culture, “When you die, your spirit goes back to your ancestral village. If you are not buried with proper ceremony, or if that was interrupted like these burials were, you will never be able to go to back to that village.”

When remains have been dug out of the ground after being laid to rest, he added, “their spirits are wandering. They cannot rejoin their relatives and family members in the afterlife. That’s my motivation for doing these repatriations,” he said, “to make sure that these spirits are at rest.”

Robert Jones, special agent in charge of the Indianapolis Field Office at the time of the 2014 recovery operation, said he was “bothered immensely” by the fact that Miller had so many Native American remains.

“Even though this case didn’t fit with our traditional type of investigation,” he said, “the FBI was in the best position to be able to right this wrong”—not only regarding the repatriation of human remains but taking responsibility for the stewardship of thousands of culturally significant artifacts Miller had collected illegally. “I felt that if it weren’t for the FBI,” said Jones, currently special agent in charge of the Bureau’s Pittsburgh Field Office, “a vast amount of important historical material might have been lost forever.”

The task of returning the material to its rightful owners was never going to be easy, both Jones and Carpenter acknowledged, because Miller collected so much over such a long period of time and did not keep detailed records, and because the items were taken from all over the globe.

Although Carpenter’s team has had many successes in the past four years, with reburials of human remains and repatriations to numerous countries, he estimates that only about 15 percent of the material has been returned.

“Our ultimate goal in this entire operation has been the respectful repatriation of these objects and these ancestors to the people they were taken from.” 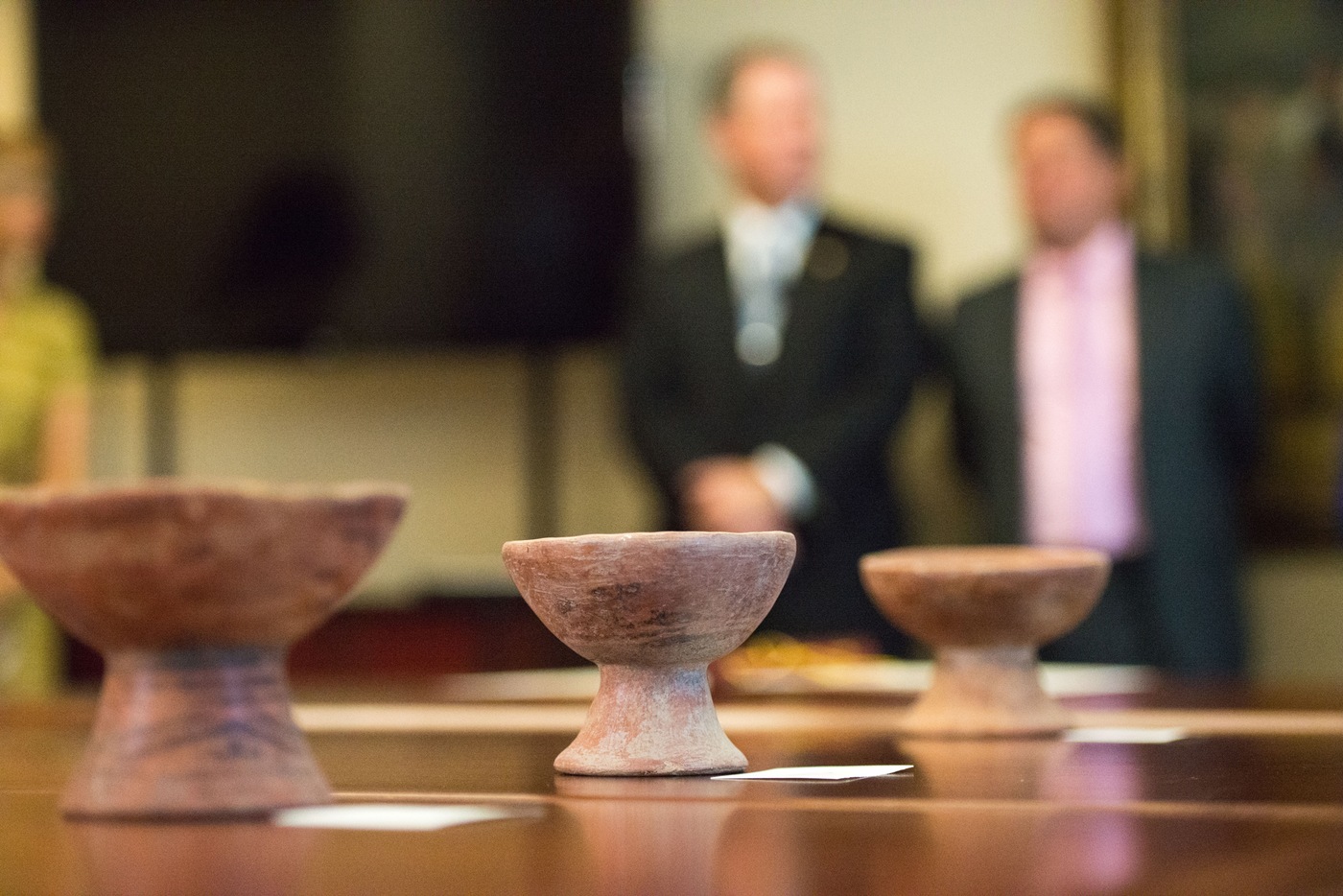 Dozens of Colombian artifacts recovered by the FBI were repatriated during a ceremony in October 2018 at the Colombian Embassy in Washington, D.C. Seen in the background are FBI Special Agent Max Marker and Colombian Ambassador H.E. Francisco Santos.

“Our ultimate goal in this entire operation has been the respectful repatriation of these objects and these ancestors to the people they were taken from,” he said. “And we want to do that with some measure of dignity.”

The FBI created an invitation-only website that contains information about all the recovered material. The idea was to have the experts “come to us,” Carpenter said. “They could review the collection relevant to their area, identify the pieces for us, tell us where they may belong, and then guide us in contacting the right individuals to begin the repatriation process.”

After the FBI took possession of the material, Carpenter’s team contacted all the federally recognized Native American tribes, which number nearly 600. Working through the United Nations, the team also notified the member nations about the recovered artifacts and the FBI’s website for viewing them. Nations nominated experts who contacted the FBI by sending an email to artifacts@fbi.gov.

“We would give them access to the website, which is not open to the public,” Carpenter said. “The intent was for them to then go online, review the material, and make claims for any objects they felt were their cultural patrimony. The same process held for Native American tribes.”

To date, he said, “we have not reached as large an audience as I’d hoped, and we have not been as successful as we'd like to be in identifying the pieces and getting the claims to come forward.”

To renew interest in the artifacts, the FBI has decided to publicize the case, providing information for the first time about the Miller investigation and the recovery and repatriation efforts. “We have a lot of work left to do,” Carpenter said, “and we can't do that work until the experts come forward and help us identify these pieces and guide us on where they need to go.”

The FBI is asking official representatives of Native American tribes and foreign governments that would like to determine whether they have a claim to any of the recovered artifacts to contact the Bureau’s art theft program and submit a request via artifacts@fbi.gov.

At the RSA Conference in San Francisco, Director Christopher Wray discussed the FBI’s approach to combating cybercrime through expertise, technology, and partnerships.

According to the FBI's Preliminary Semiannual Uniform Crime Report, both violent crime and property crime decreased in the first half of 2018 when compared to statistics from the first half of the previous year.