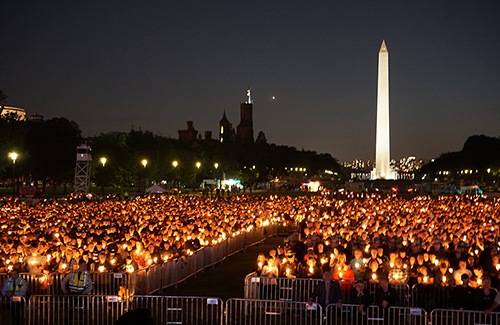 The National Law Enforcement Officers Memorial’s annual candlelight vigil was held on May 13, 2016, on the National Mall in Washington, D.C.

On May 13, 2016, Director James Comey—joining U.S. Attorney General Loretta Lynch, other officials, and families and friends of fallen law enforcement officers—participated in the National Law Enforcement Officers Memorial’s annual candlelight vigil held on the National Mall in Washington, D.C. to honor the lives of officers whose names were recently added to the memorial wall. The vigil is one of many events held in honor of National Police Week, which officially began yesterday, May 15.

And today, the FBI released preliminary statistics on the number of law enforcement officers killed during 2015: Forty-one officers were feloniously killed (down from 51 in 2014), and an additional 45 officers were killed in line-of-duty accidents, the same number accidentally killed in 2014. Of the 41 felonious deaths, firearms were used in 38 incidents, and 30 of the 41 killed officers were wearing body armor at the time of the incident. Final statistics and complete details will be available in the Uniform Crime Reporting Program’s publication, Law Enforcement Officers Killed and Assaulted, 2015, which will be released this fall.

Inside the case of a New York man recently sentenced for his support of ISIL.

The FBI is investigating tips and leads on the illegal practice of female genital mutilation.