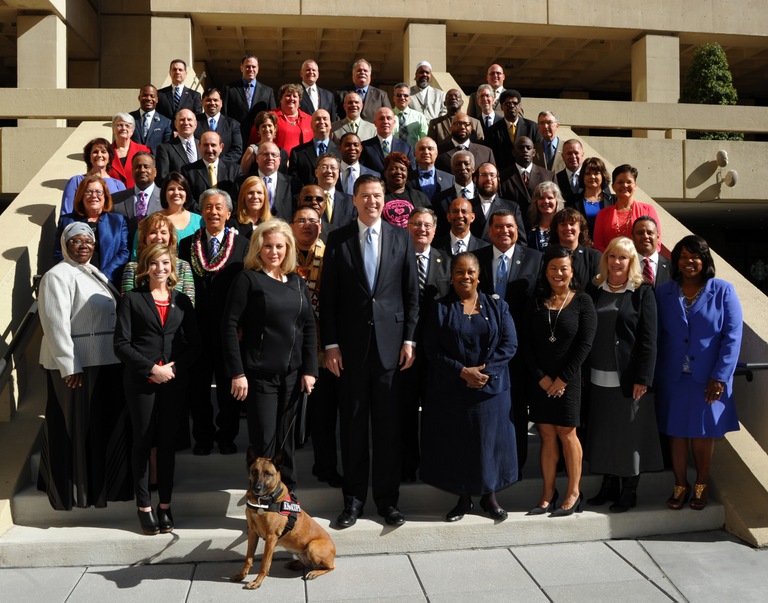 Recipients of the 2015 Director’s Community Leadership Awards were celebrated at FBI Headquarters in Washington, D.C.

Comey called today “one of the very best days in the FBI’s year.”

Each recipient received the Director’s Community Leadership Award, presented every year since 1990 by FBI field offices around the country to publicly honor those who have gone above and beyond the call to service by tirelessly working to make their own cities and towns a better and safer place for their fellow residents.

The 2015 award recipients come from all backgrounds, all professions, and all parts of the country, and the issues they focus on vary greatly. But according to Comey, “They are united by a single thing—an effort to do good.”

Comey explained why the FBI publicly recognizes community leaders in this annual ceremony. “First,” he said, “we want to thank them, because they’re doing the same things we’re doing, which is trying to make life better for the American people.”

“And secondly,” added Comey, “we want to show the world what America looks like...and that this is what we do in communities all over the country.” He also hopes that the honorees inspire others, especially young people, to follow in their footsteps.

Among the individuals and organizations recognized during 2015 by FBI field offices were:

Anchorage: Samuel Johns, for helping homeless Alaskan native reconnect with their families, friends, and culture through Forget Me Not, the non-profit organization he founded.

Baltimore: Operation Pulse (People United to Live in a Safe Environment), for its work to reduce violent crime in and around East Baltimore through a variety of crime prevention programs for churches, senior groups, churches, and businesses.

Honolulu: Roy Sakuma, who for the past 50 years has taught, mentored, inspired, and brought hope to thousands of people in Hawaii and even Japan, and who has spent countless hours speaking to school children, candidly sharing his experiences regarding bullying, suicide, and insecurity.

Houston: The Houston-based non-profit K9s4COPS organization, for providing K-9s to help police find explosives, drugs, and weapons in some of our nation’s most at-risk communities and for assisting in the apprehension of more than 400 violent fleeing suspects.

San Francisco: The KlaasKids Foundation, established by the family of murder victim Polly Klaas, for its efforts in locating and assisting children exploited by perpetrators of child sex crimes in the Bay area.

A special thanks to the winners for giving of their time and talents to enhance the lives of others.

Man sentenced for attempting to purchase biological toxin for use as a murder weapon.

Delaware case results in first-ever convictions on charges of cyberstalking resulting in death.