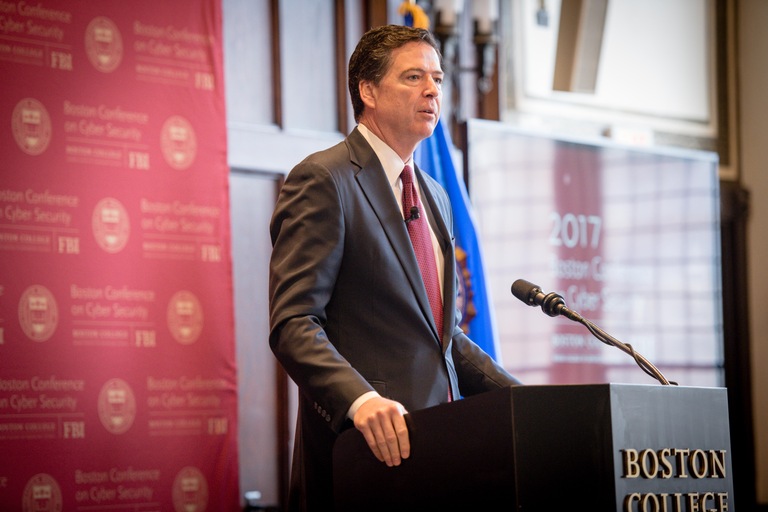 This morning, Director James Comey delivered a keynote address at the inaugural Boston Conference on Cyber Security, touching on the current cyber threat landscape, what the FBI is doing to stay ahead of the threat, and the importance of strong private sector partnerships.

The conference, a partnership between the FBI and Boston College’s Cybersecurity Policy and Governance master’s degree program, also features additional expert speakers and panelists who will be covering such areas as emerging technologies, operations and enforcement, along with real-life cyber and national security experiences focusing on risk, compliance, policy, threat trends, preparedness, and defensive strategies.

Cyber threats, said Comey, are “too fast, too big, and too widespread for any of us to address them alone.”

During his remarks, Comey discussed the “stack of bad actors” committing cyber crimes, including nation-states, multinational cyber syndicates, insiders, hacktivists, and—currently to a lesser degree—terrorists (“they have not yet turned to using the Internet as a tool of destruction,” he explained, “in a way that logic tells us certainly will come in the future.”)

And what are these bad actors after? According to Comey, they’re after information, access, and advantage. He further explained, “And we’re not only worried about loss of data, but corruption of that data and lack of access to our own information.”

“Cyber threats are too fast, too big, and too widespread for any of us to address them alone.

The public and private sector can help deter this behavior, said Comey, by reducing vulnerabilities, reducing the threat by holding accountable those who are responsible, and mitigating the damage.

Comey also spoke about the impact of the advent of “ubiquitous strong encryption” on the work of law enforcement and urged the audience to “continue to engage in what is a very complicated and difficult subject.” This so-called Going Dark issue is a growing challenge to public safety and national security that has eroded law enforcement’s ability to obtain electronic information and evidence with a court order or warrant.

The FBI wants to raise awareness about the significant potential for fraud when using binary options websites and recommends investors do their due diligence first.