Director Wray Addresses Threats Posed to the U.S. by China

“There is so much good we could do with a responsible Chinese government: crack down on cybercriminals, stop money launderers, reduce opioid overdose deaths. But at the FBI, we’re focused on the reality of the Chinese government today,” Wray said during a keynote address at the Ronald Reagan Presidential Library and Museum in Simi Valley, California.

The threat’s complexity is rooted in the intrinsic entanglement of the American and Chinese economies, which is fueled by a high U.S. demand for Chinese-made products and a steady exchange of students between American and Chinese borders. Wray stressed that China has pulled no punches about capitalizing on this interconnectedness to chase economic superiority.

“When we tally up what we see in our investigations—over 2,000 of which are focused on the Chinese government trying to steal our information or technology—there is just no country that presents a broader threat to our ideas, our innovation, and our economic security than China,” Wray said, adding that the Bureau opens a new counterintelligence case against China about twice a day. 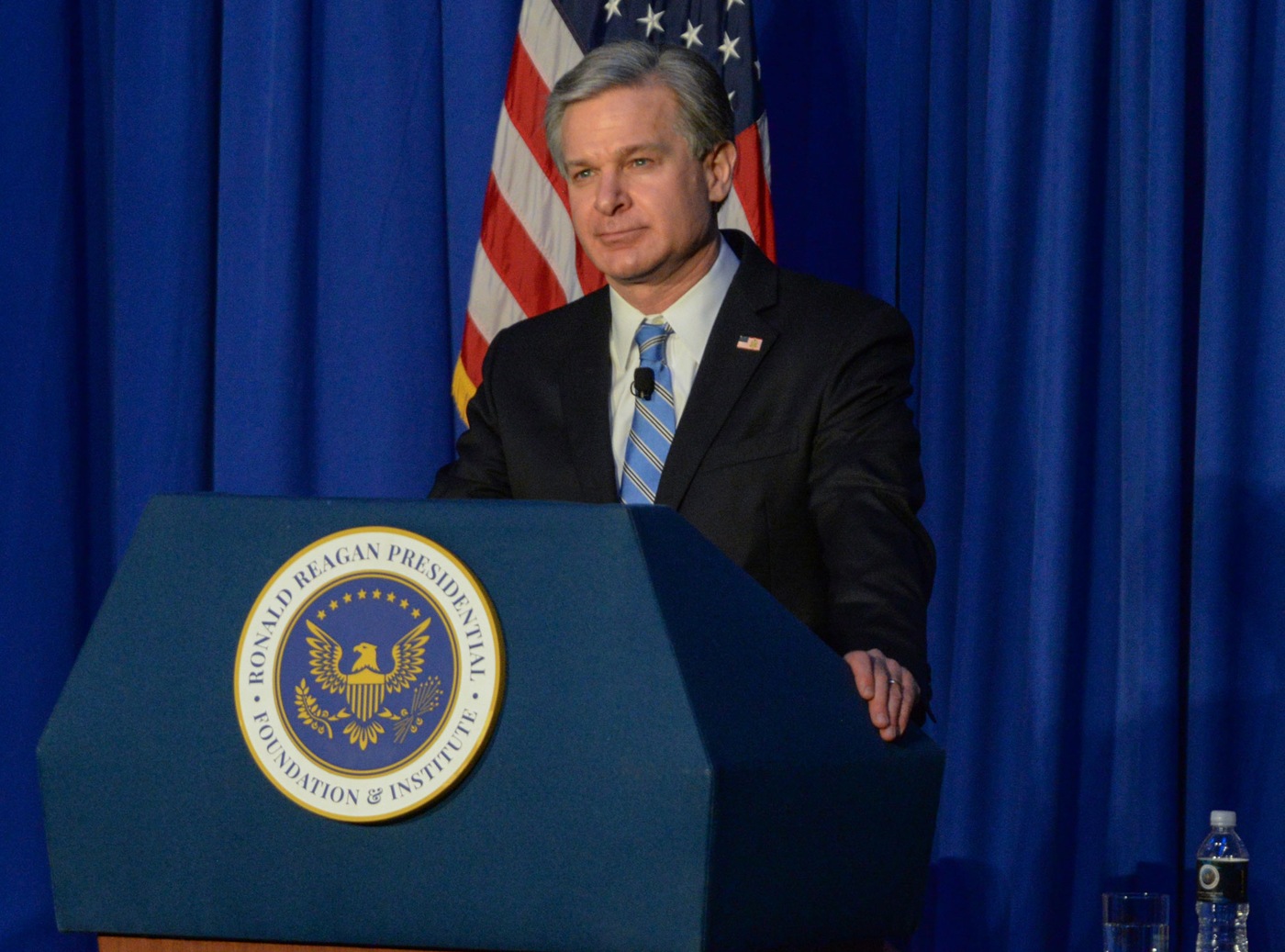 FBI Director Christopher Wray discussed the myriad threats our nation faces from the Chinese government and Chinese Communist Party during a speech at the Ronald Reagan Presidential Library and Museum in Simi Valley, California, on January 31, 2022. (Photo courtesy of Reagan Library)

China’s strategy is especially dangerous because it pursues economic espionage on multiple fronts—some so subtle that they don’t set off alarms. But once China sets its sights on a technology, Wray explained, it uses every available resource to try to steal it. He pointed to a foiled Chinese plot to use a combination of industrial espionage and hacking to steal trade secrets from GE Aviation to illustrate this approach.

This theft not only gives China an unfair advantage in the global marketplace but also directly harms American companies and workers.

Yet the Chinese government’s thirst for power can’t be quenched by economic dominance alone, Wray noted. China also ultimately seeks to undermine and infiltrate the U.S. government and silence dissent whenever possible.

The Chinese Communist Party (CCP) aims to win American leaders’ loyalty through money or intimidation and “to undermine our democratic process by influencing our elected officials.” Wray said. The CCP is patient in this pursuit, aiming to recruit early-career politicians—often at the state and local level—who can then be called on to do Beijing’s bidding when their power and influence grow.

“ ... there is just no country that presents a broader threat to our ideas, our innovation, and our economic security than China.”

The Chinese government is also increasingly using a program it calls Fox Hunt to target, threaten, intimidate, and ultimately repatriate former Chinese citizens living overseas whom it sees as a political or financial threat. Many of them are green card holders and naturalized citizens here in the United States.

“China may be the first government to combine authoritarian ambitions with cutting-edge technical capability,” Wray said. “It’s like the surveillance nightmare of East Germany combined with the tech of Silicon Valley.”

Fortunately, as China’s thirst for power has grown, the FBI’s strategy and capabilities have evolved to deter it.

One such advance has been the FBI’s use of intelligence to identify and disrupt threats early, as it did in response to China’s recent compromise of Microsoft Exchange email servers.

The FBI also now shares information with domestic and international partners to help them defend against future plots and has boosted private-sector engagement.

America’s democratic and legal processes also play a role, Wray explained, since our ability to make substantiated allegations can move allies to act, and indictments can inspire increased public scrutiny of bad actors.

Wray’s appearance marked the opening of the Reagan Library’s “FBI: From Al Capone to al Qaeda” exhibition. He is the first sitting Bureau director to visit the library.

Inside the FBI: Technology and Espionage

On this episode of Inside the FBI, we discuss some of the ways the government of China and the Chinese Communist Party threaten the economic well-being, national security, and democratic values of the United States…

In FBI field offices nationwide, agents and community outreach specialists are working every day to boost reporting in support of a comprehensive effort to combat hate crimes.

Working with the FBI and the Santa Cruz Police Department, the Northern District of California prosecuted its first case under the Matthew Shepard and James Byrd, Jr. Hate Crimes Prevention Act.