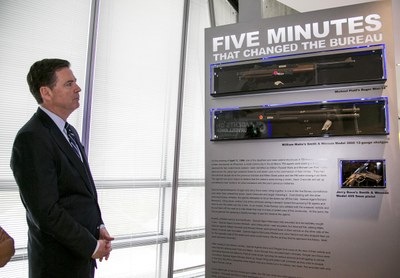 Director Comey unveils a three-panel memorial display that tells the story of the “1986 FBI Miami Shootout” inside the main lobby of the Benjamin P. Grogan and Jerry L. Dove Federal Building in Miramar, Florida, on April 11, 2016.

Today outside the FBI’s Miami Field Office, Director James Comey took part in a solemn observance of the 30th anniversary of one of the Bureau’s most fiercest gunfights which left two Bureau agents—Benjamin Grogan and Jerry Dove—dead, and five other agents wounded. The two heavily armed bank robbery suspects being pursued were also killed.

In remarks, the Director said the FBI and law enforcement agencies around the country learned valuable lessons from the shootout. They included the need for better weapons, armor, and training.

“We needed better body armor because the bad guys were firing rounds that could pierce the vests we were using at the time,” Comey said. “We needed more powerful weapons because we were facing people who were using military grade weapons on the street, which were no match for our handguns. Armaments, body armor, training, and deployment were an important lesson from the painful loss 30 years ago.”

Attending the memorial service were families and loved ones of the agents involved in the April 11, 1986 event as well as a number of law enforcement partners. Following the service, a new memorial plaque honoring those brave agents was unveiled inside the field office.

Delaware case results in first-ever convictions on charges of cyberstalking resulting in death.

Brenda Delgado, wanted for her alleged role in a murder-for-hire, is in custody.