FBI Teams Up with Penn State to Offer Online Training 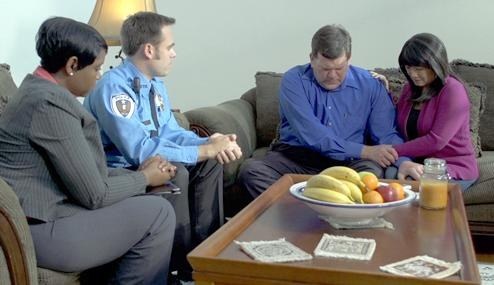 A scene from the demonstration video embedded in the “We Regret to Inform You...” online training module developed jointly by the FBI and Pennsylvania State University to provide assistance to law enforcement and other first responders charged with providing death notifications to victims’ next of kin.

At an event held last week at FBI Headquarters, the Bureau—in conjunction with its partners at Penn State University (PSU)—announced a new, no-cost training website for law enforcement agencies and other first responders responsible for notifying the family members of those who have died suddenly as a result of a crime, an accident, a suicide, or other type of incident.

This initiative was developed to better equip law enforcement personnel, victim advocates, coroners, medical examiners, chaplains, hospital staff, and others who find themselves delivering death notifications to do so with professionalism, dignity, and compassion. Not only because it’s the right thing to do, but also because the way a death notification is made can have a significant impact on a family’s grieving process and on potential future prosecutions. Director James Comey, who spoke at the event held during National Crime Victims’ Rights Week, said, “We have to be better when we intersect with people at the most painful moment in their entire lives.”

The training is entitled “We Regret to Inform You...” and can be accessed at www.deathnotification.psu.edu.

Funded under the FBI’s Active Shooter Initiative, the 45 minute online learning module—available to first responders nationally and internationally—begins with an impact video featuring Karen Schmoyer, the mother of a Pennsylvania murder victim, who shares her personal experiences of when and how she was told of her 15-year-old daughter’s death. The training also features descriptions of a proper four-step death notification process that includes extensive planning and preparation for the visit to the next of kin, the actual visit to deliver the notification, and the follow-up with the family. And it notes that death notifications should always be made in person, even if the family doesn’t live in the same jurisdiction.

The training—based on best practice standards and the latest research—covers a variety of considerations, including mass casualty events, foreign national victims living in the U.S. and American citizens living abroad, language barriers and other cultural differences, dealing with children and the elderly, the role of victim assistance, the media, and the impact of social media. It features a resource section with web links, a pocket guide for the death notification team to use, and a grief brochure that can be left with the family after the notification. A second video included in the training involves reenactments of proper death notifications.

An assessment tool is also part of the training, and once users receive a passing score, they will be issued a certificate. Questions on the training can be directed to deathnotification@leo.gov.

The FBI’s Critical Incident Response Group, Office of Partner Engagement, and Office for Victim Assistance worked together to develop this valuable training with representatives of PSU’s Police and Public Safety group and WPSU, the university’s public broadcasting entity.

According to Kathryn Turman, head of the FBI’s Office for Victim Assistance, there is a nationwide need to provide training for performing proper death notifications so that, echoing Comey sentiments, “victims and their families have the best of us at the worst of times.” She added, “We can never underestimate the power of carefully chosen words delivered compassionately.”