80 Charged in Racketeering Conspiracy at the Eastern Correctional Institution 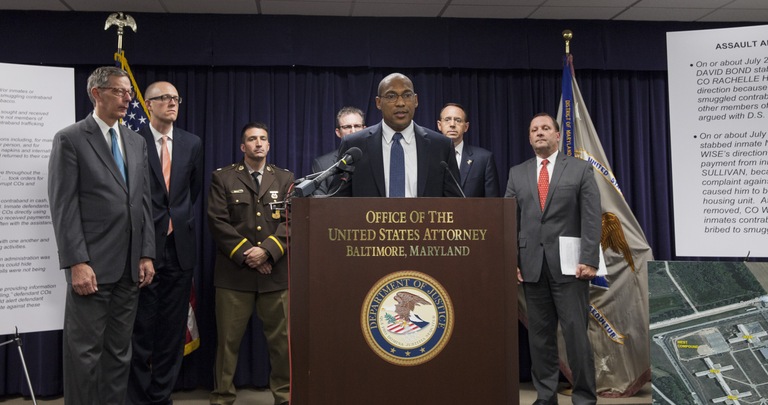 Eighty defendants were charged on Wednesday in a racketeering conspiracy operating out of the Eastern Correctional Institute in Westover, Maryland.

According to the unsealed indictments, the alleged conspiracy took place in the largest state in prison in Maryland, which houses more than 3,300 inmates. Inside, correctional officers, inmates, and outside facilitators were supposedly working together to smuggle in contraband including narcotics, tobacco, and cell phones.

The indictments alleged that correctional officers took payments from inmates and facilitators, or engaged in sexual relations with inmates, to traffic in heroin, cocaine, opioids, and other contraband like pornographic videos. Inside the prison, the narcotics and contraband were sold to fellow inmates while the illegal proceeds helped expand the criminal operation.

Eighteen correctional officers, 35 inmates, and 27 outside facilitators were allegedly involved in the moneymaking scheme before an FBI-led investigation with the Department of Public Safety and Correctional Services (DPSCS) dismantled the organization.

“Few things threaten our society more than public servants who betray their oath for personal gain,” said Gordon Johnson, special agent in charge of the FBI’s Baltimore Field Office, said on Wednesday. “It was extremely courageous of the Maryland DPSCS to allow the access required to conduct this type of investigation. The state of Maryland and the FBI together have made this community safer.”

Join the FBI for a Facebook Live event today at 3 p.m. EDT to learn more about the unique career opportunities that FBI interns and entry-level professionals can pursue at the Bureau.

Steps you can take to minimize the risks associated with doing business online, surfing the Internet, and sharing information on social media sites.