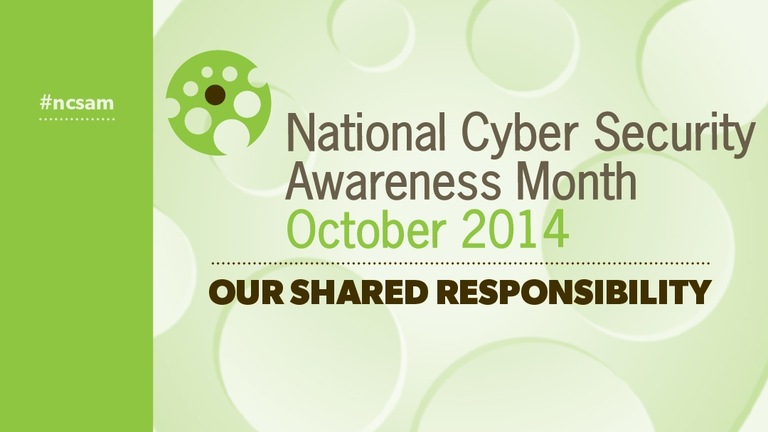 Every October since 2004, National Cyber Security Awareness Month—administered by the Department of Homeland Security (DHS)—reminds us of the importance of protecting not only our individual identities, finances, and privacy but also our country’s national security, critical infrastructure, and economy. Cyber security is a responsibility shared by all—the public sector, the private sector, and the general public.

Individually, Americans should ensure the security of their own computers and other electronic devices. You don’t want criminals accessing your bank accounts online. You don’t want to become part of a criminal botnet responsible for stealing millions of dollars. You don’t want to unknowingly infect your company’s computer network with a damaging virus.

So how can you protect against those scenarios? Here are a few tips:

In other words, make it as difficult as possible for criminals and others to use your digital technology against you, against other innocent victims, and against our nation as a whole.

Agencies across the U.S. government, including the FBI, are making cyber security a top priority as well.

Within the Bureau, we prioritize high-level intrusions by the biggest and most dangerous botnets, state-sponsored hackers, and global cyber syndicates. Collaborating with our partners—including DHS, the intelligence community, law enforcement at all levels, and the private sector—we strive to predict and prevent these kinds of intrusions, not just investigate them after the fact.

Our legal attaché offices coordinate international investigations and address jurisdictional hurdles and differences in the law from country to country, supporting and collaborating with newly established cyber crime centers at Interpol and Europol.

We work side by side with our federal, state, and local partners on cyber task forces in each of our 56 field offices and at the National Cyber Investigative Joint Task Force.

We also exchange information about cyber threats with the private sector through partnerships such as the Domestic Security Alliance Council, InfraGard, and the National Cyber Forensic and Training Alliance.

So do all these partnerships make a difference? Here are some recent case examples that clearly demonstrate the value of collaboration:

Stay tuned to our website during the month of October for more information on cyber security, cyber threats, investigative activities, and wanted cyber fugitives.

Help identify individuals who have traveled overseas to fight alongside terrorists.