During what authorities believe was his first bank robbery nearly three years ago in Chino, California, the AK-47 Bandit—so named because he carries an assault rifle during takeover-style robberies—shot and seriously wounded a police officer while making his escape. Since then, he has robbed or attempted to rob five more banks, most recently in August, when he hit a rural bank in Nebraska.

“He has shown he is not afraid to shoot someone, and experience tells us he is not going to stop robbing banks until we catch him,” said Special Agent Kevin Boles, who is working the case out of our Los Angeles Field Office. “We feel like we are racing the clock on this guy,” Boles said. “If we don’t get him soon, things could end badly and someone else might get hurt.” 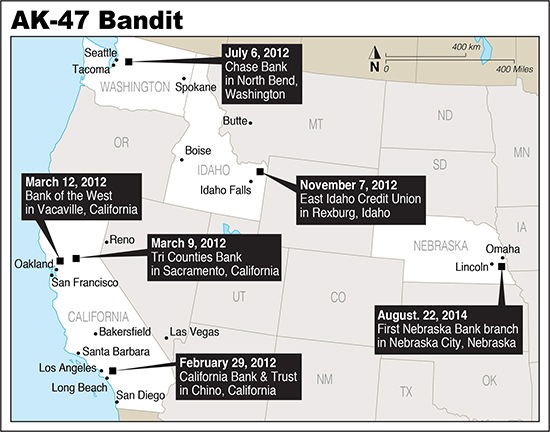 That’s why we are asking for the public’s help and renewing our publicity campaign regarding this violent criminal. There is a reward of up to $100,000 for information leading to the arrest and conviction of the AK-47 Bandit.

Here is what we know:

Police believe the variety of surveillance video from the robberies—and a voice recording—may help the public identify this criminal. “We truly believe that someone knows this suspect, whether they are familiar with his physique, his voice, his vehicle, or even some of the apparel he’s wearing during the robberies,” said Bill Lewis, assistant director in charge of our Los Angeles Field Office during a 2013 press conference announcing the reward offer. “We are hoping citizens will take notice, look a little closer, and think a little harder about whether they have information that could break this case.”

Anyone with information about the AK-47 Bandit’s identity or whereabouts is urged to contact investigators at the toll-free number 1-800-CALL-FBI or send an e-mail to bandit@chinopd.org. Information can be provided confidentially.

Billboard advertising has also been donated to assist with the publicity campaign. Digital ads, including bank surveillance images, the reward offer, and the toll-free number, are running in the Los Angeles region and other areas where robberies occurred. The FBI’s social media channels are helping to publicize the case as well.

“This guy attempted to murder a police officer,” Boles said. “There is no telling what he is capable of. We need to get him off the streets for everyone’s safety.”