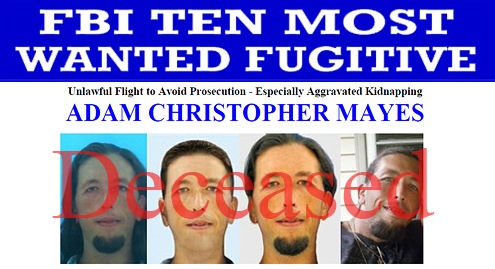 Adam Mayes, wanted in connection with the recent kidnapping of a mother and her three daughters in Tennessee, has been added to the FBI’s Ten Most Wanted Fugitives list. Bodies of two of the kidnap victims were found last week, but two girls—ages 8 and 12—remain missing and are considered to be in extreme danger.

We need your help. The FBI is offering a reward of up to $100,000 for information leading directly to the arrest of the 35-year-old Mayes, who has been charged with murder, kidnapping, and unlawful flight to avoid prosecution.

On April 27, Jo Ann Bain, 31, and her three children were reported missing from Whiteville, Tennessee, and their vehicle was later found abandoned. Last week, authorities found the bodies of Bain and her oldest daughter, 14-year-old Adrienne, buried behind a mobile home where the Mayes family lived in Guntown, Mississippi.

“We believe Mayes could be anywhere in the United States, and we are extremely concerned for the safety of the girls,” said Aaron Ford, special agent in charge of our Memphis office. “Anyone who has any information about this case, or if you’ve seen Mayes or the girls, please contact your nearest FBI office or the local police immediately.”

Mayes was last seen on May 1 in Guntown. He has brown hair and blue eyes, is 6’3” tall, and weighs between 175 and 235 pounds. He may have changed his appearance by growing a beard or cutting his hair, and he may have changed the appearances of Alexandria and Kyliyah Bain as well. Mayes has connections in Mississippi, Arizona, Texas, North Carolina, South Carolina, and Florida. He is considered armed and dangerous.

During a press conference today in Mississippi to announce Mayes’ addition to the Top Ten list, Ford praised the “tireless efforts” of the local and state law enforcement officers and prosecutors from Tennessee and Mississippi who have worked around the clock on the case. “We are enlisting every available resource we have to locate the missing girls and to arrest Adam Mayes,” he said.

Mayes is the 496th person to be named to the Ten Most Wanted Fugitives list. Since its creation in 1950, 465 fugitives on the list have been apprehended or located—153 of them as a result of citizen cooperation.

By adding Mayes to the list, Ford noted, “We are enlisting one of our most powerful weapons against crime—you, the citizens we serve. So as we continue our relentless search, we’re asking for your assistance, too.”

“It is law enforcement’s responsibility to protect those who cannot protect themselves, and in this situation that is Alexandria and Kyliyah Bain,” said Mark Gwyn, director of the Tennessee Bureau of Investigation. “These two children have lost their mother and older sister and deserve to be safely returned to their father. We believe someone out there knows where Adam Mayes and the girls are and will do the right thing and contact authorities with that information. It only takes one phone call.”

How to Spot a Possible Insider Threat

Economic espionage is a significant threat to our country’s economic health and security.