Murder and the Dixie Mafia 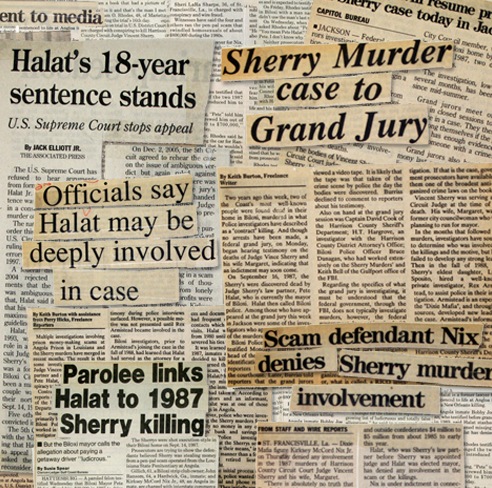 Newspaper clips of the case.

This month marks the 25th anniversary of the murder of Judge Vincent Sherry and his wife, Margaret, whose deaths at the hands of the so-called Dixie Mafia exposed the lawlessness and corruption that had overtaken Mississippi’s Gulf Coast in the 1980s.

“It was out of control,” said retired Special Agent Keith Bell, referring to the level of corruption in Biloxi and Harrison County—so much so that in 1983 federal authorities would designate the entire Harrison County Sheriff’s Office as a criminal enterprise. Special Agent Royce Hignight initiated the investigation of the sheriff and was soon joined by Bell.

“They were doing anything and everything illegal down here,” said Bell, who grew up on the Gulf Coast. “For money, the sheriff and officers loyal to him would release prisoners from the county jail, safeguard drug shipments, and hide fugitives. Anything you can think of, they were involved in.”

Bell is quick to point out that there were plenty of honest officers on the force, and some would later help the FBI put an end to the culture of corruption in Biloxi. But for a long time, Sheriff Leroy Hobbs and his Dixie Mafia associates held sway.

The Dixie Mafia had no ties to La Cosa Nostra. They were a loose confederation of thugs and crooks who conducted their criminal activity in the Southeastern United States. When word got out that Biloxi—with its history of strip clubs and illicit gambling—was a safe haven, the criminals settled in.

At the same time, members of the organization incarcerated at the Louisiana State Penitentiary at Angola were running a “lonely hearts” extortion scam with associates on the street. The scam (see sidebar) targeted homosexuals and brought in hundreds of thousands of dollars—money they entrusted to their lawyer, Pete Halat.

But Halat, who would later become mayor of Biloxi, spent the money. When it came time to hand it over to the crooks, he said the cash had been taken by his former law partner, Vincent Sherry. So the Dixie mob ordered a hit on Sherry, a sitting state circuit judge who had no direct ties to the criminals. On September 14, 1987, Sherry and his wife were murdered in their home.

“Gulf Coast residents were shocked by the murders,” Bell said. Local authorities worked the case unsuccessfully for two years. The FBI opened an investigation in 1989, and Bell was assisted in the investigation by Capt. Randy Cook of the revamped sheriff’s office—Leroy Hobbs was convicted of racketeering in 1984 and sentenced to 20 years in prison.

The federal investigation into the Sherry murders lasted eight years. In the final trial in 1997, Pete Halat was sentenced to 18 years in prison. Kirksey McCord Nix—the Dixie Mafia kingpin at Angola who ordered the hits—as well as the hit man who killed the Sherrys each received life sentences.

As a result of the cases, Bell said, “Gulf Coast citizens started demanding more professional law enforcement and better government.” Bell—who wanted to be an FBI agent since he first watched “The FBI” television series as a child—added, “It meant a lot to me to return to my home and do something about the corruption that had worked its way into government and law enforcement there.” He added, “The majority of citizens realized that if the FBI had not stepped in, the lawlessness and corruption would likely have continued unabated.”

Dixie Mafia inmates at the Louisiana State Penitentiary at Angola were behind a scam that brought in hundreds of thousands of dollars. Ringleader Kirksey McCord Nix—a convicted murderer serving a life sentence without parole—believed that if he raised enough money he could buy his way out of jail.

Here’s how the scam worked: Inmates paid guards to use prison telephones. Then they placed bogus ads in homosexual publications claiming they were gay and looking for a new partner to move in with. The men who replied to the return post office box address got additional correspondence and racy pictures. But there was a catch—the scammers told their victims a variety of lies about why they needed money before they could leave where they were.

“A lot of money came flowing in,” said retired Special Agent Keith Bell. “There were hundreds of victims.” Men from all walks of life—professors, mail carriers, politicians—fell victim to the scam. “One guy in Kansas mortgaged his house and sent $30,000 to the scammers over a period of months,” Bell recalled.

To add insult to injury, some of the inmates writing letters eventually confessed the scam to their victims—and then extorted even more money by threatening to “out” the men if their demands were not met.

In the 40 years since the FBI began training women to be special agents, many have said it was a dream they had held since childhood. They played cops and robbers as kids, kept their noses clean, and maybe joined the military or the local police, consciously burnishing their credentials on the road to becoming G-Women.