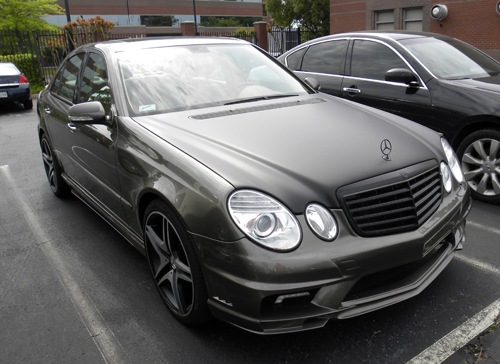 Law enforcement seized this 2008 Mercedes-Benz from Memphis luxury car salesman Michael Brown during the investigation into allegations that Brown was defrauding customers who ordered luxury cars through his company’s website.

It’s a cautionary consumer tale that’s been around forever: In an attempt to get a deal on something that sounds too good to be true, the customer gets the shaft instead.

That’s just what happened in the case of a luxury car salesman in Tennessee who used a website to advertise below-market prices on a variety of expensive vehicles. Not only did he not deliver the vehicles ordered by many of his customers, he also kept all or part of the fees they paid him in advance.

The perpetrator’s scam, however, eventually caught up with him—as did law enforcement—and this summer, Memphis resident Michael Brown was sentenced to more than six years in federal prison after pleading guilty to mail and wire fraud.

Brown was the sole owner and chief executive officer of Valkry Corporation, a company incorporated in the state of Georgia in 2009 that maintained a website selling luxury cars—it had no showroom. The FBI began looking into Brown’s operation in 2011 on the heels of a more than $1 million civil lawsuit filed by one of his customers—an international luxury car seller based in China—for failing to deliver 16 vehicles the company had paid for by transferring funds into Valkry bank accounts in the U.S.

A significant portion of the investigation, which was conducted by the FBI’s Memphis Field Office, was spent analyzing Brown’s personal and business financial records. And by reviewing these records, investigators were able to identify some of Brown’s victims, conduct interviews with them, and collect additional evidence. For example:

How was Brown able to carry on the scam for several years? According to the Memphis FBI agent who investigated the case, he was a likeable con man and very smart. To make a money trail harder to follow, he set up a number of bank accounts in different parts of the country, using third parties to open the accounts and to purchase some of his vehicles for him. Said the agent, “He was extremely clever in his movement of funds and assets. I often didn’t find out about new accounts he opened until the money was gone.”

But eventually, investigators were able to piece together what Brown was doing, which our agent likened to a Ponzi scheme: Brown used money from newer customers to issue partial or full refunds to previous customers, or to purchase cars to sell to other customers, all while using a large portion of his customers’ money to support his own lavish lifestyle.

Even the possibility of going to jail didn’t slow Brown’s criminal activities down: Advised that he was the focus of a federal investigation in July 2012, he continued to ply his trade. For his last criminal act, committed shortly after his guilty plea in February 2015, Brown managed to swindle a quarter of a million dollars from a well-known former National Basketball Association player who was looking for a deal on a luxury car.

The FBI is part of a well-rehearsed security effort in place for the pope’s visit to the U.S.