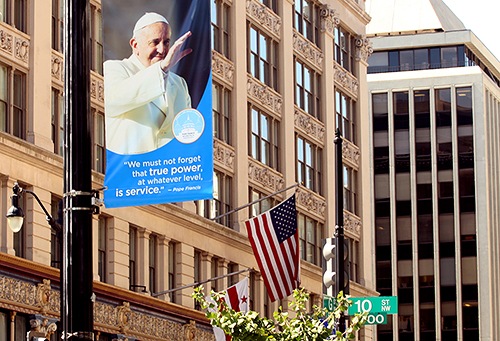 A banner in Washington, D.C. welcomes Pope Francis. The FBI is part of the highly orchestrated security effort surrounding the pope’s six-day visit to D.C., New York City, and Philadelphia.

The pope’s six-day visit to Washington, D.C., New York City, and Philadelphia—which begins September 22—has been designated a national special security event (NSSE) by the Department of Homeland Security (DHS). An NSSE is a significant national or international event determined by DHS to be a potential target for terrorism or criminal activity. Under the designation, the U.S. Secret Service is placed in charge of event security and the FBI has the lead on collecting intelligence and—should a crisis occur—managing the response. Examples of past NSSEs include State of the Union addresses, party conventions, United Nations General Assembly meetings, inaugural events, and the Winter Olympics and Super Bowl in 2002.

Agencies have been coordinating and training together for months for the pope’s visit, including holding tabletop exercises in each of the cities. Agency leaders briefed the media a week before the pope’s arrival after a dry-run exercise in New York City.

“Preparations for events such as this are a cooperative effort,” said Diego Rodriguez, assistant director in charge of the FBI’s New York Field Office. “No one federal, state, or local agency alone can carry out the measures necessary to secure the event.”

While the pope’s visit in itself would merit high security, his packed itinerary includes meeting President Obama at the White House, addressing a joint session of Congress, and speaking at the 70th session of the U.N. General Assembly in New York City—where more than 170 heads of state from around the world are expected to convene. 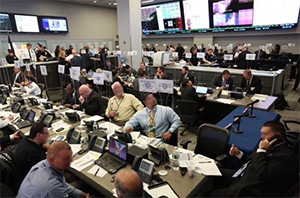 Multiple law enforcement agencies participated in a tabletop exercise at NYPD Headquarters Monday, September 14, as part of security preparations for the pope’s arrival.

“Liaison officers will have collaborated closely to make sure information and intelligence is moving freely,” said James Yacone, assistant director of the FBI’s Critical Incident Response Group, which is leading the Bureau’s efforts during the pope’s visit. Yacone said the FBI’s national tactical assets—such at the Hostage Rescue Team—are staged to respond if needed. He described the level of coordination for security as unprecedented.

“This is going to be one of the largest lifts in the nation’s history for national security events. There are three major metropolitan areas that are going to all have to seamlessly receive and send off the pope,” Yacone said. “That all has to be very skillfully thought out—how we’re going to protect him, allow access of the public at different venues, and do it in such a manner that law enforcement can screen as many people as possible to keep it secure.”

The heaviest lifting, Yacone said, falls on the uniformed officers who put the plans into action. For weeks now, police departments in D.C., New York, and Philadelphia have put out the word that security will be tight when Pope Francis is in town, with road closures, screening checkpoints, and restrictions on items like bicycles, backpacks and “selfie” sticks.

“From a capacity standpoint, nothing is more important than the participation of our state and local partners,” Yacone said. “Neither the FBI nor the Secret Service could do our jobs effectively without them because they are bringing the capacity.”

The agencies involved also rely heavily on the public to increase their capacity to ensure security at the papal-related events and other large gatherings. To submit tips or information about potential threats, visit tips.fbi.gov.

Procedures for NSSEs were established in 1998 under a presidential directive. The Presidential Threat Protection Act, which codified the Secret Service’s role as the lead agency for security, was signed into law in 2000. Since then, participating agencies have jointly managed nearly 50 such events.

Although security can present challenges, Rodriguez said there is a bright side. “While an event this size has the potential to cause inconveniences, I ask you to enjoy this wonderful time … as we prepare for the many historic events that will take place.”