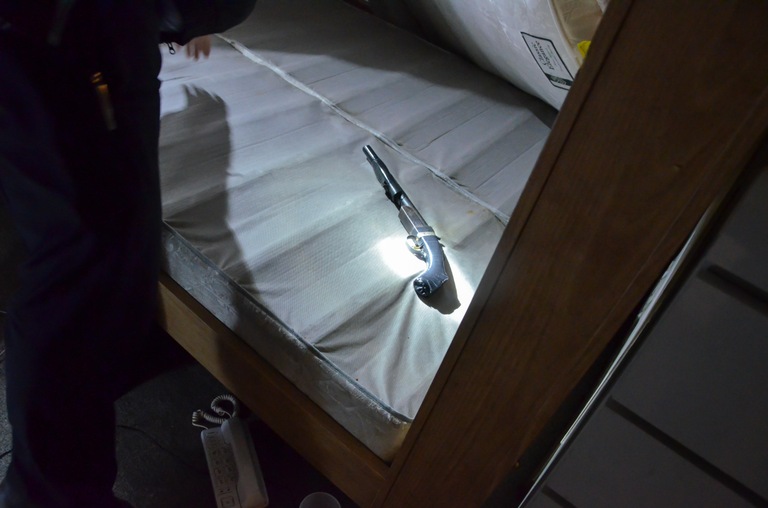 A sawed-off shotgun is uncovered during a search by the Violent Crimes Task Force, which is made up of Chicago Police Department officers, Cook County Sheriff’s Office deputies, and FBI agents.

As a chilly spring drizzle fell in one of Chicago’s most dangerous neighborhoods, FBI agents and Chicago Police Department officers on our Violent Crimes Task Force gathered on a rooftop parking garage for a last-minute briefing before executing a search warrant nearby involving a recently paroled felon.

Members of the task force donned bullet-proof vests and finalized their operational plan. The felon in question was believed to be violating his parole by carrying a sawed-off shotgun, and every safety precaution needed to be taken.

Established in 1989, Chicago’s Violent Crimes Task Force is one of the oldest continuing task force operations in the FBI. The squad, known as VC1, consists of agents and members of the Chicago Police Department (CPD) and Cook County Sheriff’s Office who work side by side and are on call around the clock. Left: (Task force members conduct a search.) “If something happens,” said Special Agent Mark Quinn, who joined the squad in 1994 and has supervised it since 2006, “we respond. Our first priority is public safety.”

The task force handles a variety of violent crimes such as extortion and murder for hire, but the “big three” offenses it investigates are kidnappings, bank robberies, and fugitive matters.

VC1 is staffed by seasoned investigators like Quinn and CPD’s Sgt. Warren Richards—who was leading the search warrant operation—and young agents learning the ropes and getting valuable street experience.

Special Agent Joe Raschke, an 11-year veteran of the squad, remembers that when he first came to the Chicago Field Office, “VC1 was the squad to be on.”

“As a young agent you get great experience,” Raschke said, “not just making arrests but interviewing subjects and victims and learning how to deal with a variety of people and situations.”

Sgt. Richards, CPD’s commanding officer on the task force, added, “I like bringing fugitives to justice and locking up bad guys. On this squad I get to do that almost every day.” 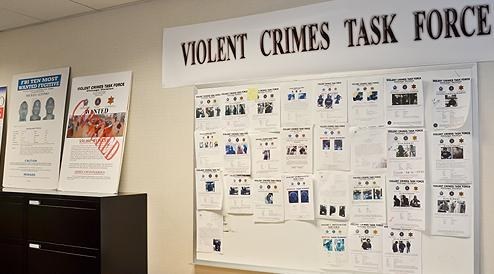 A bulletin board in the VC1 squad office displays posters of wanted fugitives.

On this particular day, however, there would be no arrest. The team moved into place in unmarked vehicles, setting up to cover the front and back of the house where the felon was living. But when the search warrant was executed, the only people in the residence were a woman and her young daughter. The search did turn up the shotgun, under the felon’s mattress. He was now a fugitive and would eventually be arrested.

Quinn noted that despite the different law enforcement organizations they belong to, there is a strong bond among VC1 members. “The task force setting breaks down barriers between agencies,” he said. “Everyone works together as a team.”

That teamwork pays dividends beyond the task force, too. Relationships have expanded over time so that agents and detectives working all kinds of cases can pick up the phone and get help from their local and federal partners. “Agents and detectives all over the city have each other on speed dial,” Sgt. Richards said.

And members of the task force are always ready to respond, Quinn said. “Whenever there is a murder, kidnapping, or multiple bank robberies and a call goes out for volunteers, even on weekends and evenings, we always get more people than we need.” He added, “If someone is looking for a 9-to-5 type of job in law enforcement, VC1 is definitely not for them.”

The FBI is the centralized collection point for foreign fingerprint records and biometric data.