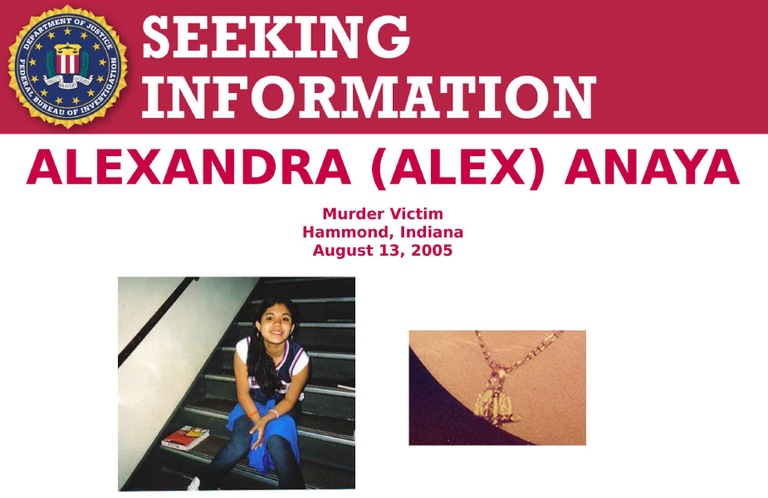 Thirteen-year-old Alexandra Anaya was brutally murdered 11 years ago this month, and today the FBI’s Chicago Division—in close partnership with local authorities—marked the anniversary by requesting the public’s assistance to help to solve the case.

The Indiana teen, known to friends and family as Alex, was reported missing from her home August 13, 2005—she was last seen by her mother early that morning. Three days later, boaters on the Little Calumet River in Chicago found her dismembered body floating in the water.

Both the Chicago Police Department (CPD) and the Hammond Police Department in Indiana conducted an exhaustive investigation at the time and have continued to follow leads since, but Alex’s killer remains at large. Her case is one of many now being reviewed by FBI Chicago’s recently established Homicide Initiative Task Force.

“We believe this was not a random act of violence and that Alex knew her assailant,” said FBI Chicago Special Agent in Charge Michael J. Anderson during a press conference today in Chicago. “It has been more than a decade since Alex was murdered, and during that time people and relationships have changed. We are hopeful that someone will come forward now,” he added.

The Homicide Initiative Task Force—a collaboration between the FBI and the CPD—was launched in April 2016 to help local authorities solve some of Chicago’s most violent murders. Task force members re-examine cold cases with a fresh perspective and take advantage of the most current scientific techniques and forensic processes.

“The homicide rate is extremely high in Chicago,” said Special Agent Courtney Corbett, a task force member who works alongside CPD detectives and other FBI personnel. “Because there are so many homicides here, a cold case could be 20 years old or a murder that occurred six months ago.”

CPD homicide detectives often have caseloads that are overwhelming, Corbett said. “The task force is here to provide specialized assistance and help in any way we can.” That assistance translates into FBI resources such as enhanced DNA testing, telephone record analysis, surveillance, and the deployment of Bureau experts, including dive team personnel and members of the Behavioral Analysis Unit—commonly called profilers.

In Alex’s case, Corbett said, “we have been reviewing leads and re-interviewing individuals associated with this case. The DNA evidence has been well preserved, and we plan to use enhanced technology to exploit that evidence.” She added that task force members are fully invested in finding the killer. “We want to bring justice to Alex and other victims like her, and their families,” Corbett said. “To do that—and to ultimately reduce the homicide rate in Chicago—we all have to work together.”

Anyone with information regarding the murder of Alex Anaya—no matter how insignificant they think it might be—is asked to contact the FBI’s Chicago Field Office at (312) 421-6700 or submit a tip online.

The FBI joins the nation in remembering and honoring the victims of the 9/11 terror attacks, which occurred 15 years ago this month.

A Look Back at the 1991 Talladega Prison Riot

A riot at a federal prison in Talladega, Alabama 25 years ago this month provides a look back at the FBI's early crisis response capabilities.