FBI Marks 20 Years of Training at the ‘Body Farm’

Unearthing Stories for 20 Years at the ‘Body Farm’

The FBI investigators in protective gloves, boots, and coveralls weren’t quite sure what they would find behind the padlocked chain-link fence on a wooded hillside in Tennessee, except that there would be lots of dead bodies.

The special agents and analysts were students in the FBI Laboratory’s Recovery of Human Remains course, held in March every year by the Forensic Anthropology Center at the Anthropology Research Facility in Knoxville. The outdoor site—popularly known as the “Body Farm”—consists of 2.5 shady acres where human donors are buried, partially covered, or left out in the elements so forensic anthropologists can study how bodies break down and decompose under different conditions. The research facility was established in 1981 with the first body donor. The FBI Laboratory began sending personnel to the Body Farm two decades ago to better understand the intricacies of investigating outdoor crime scenes.

“All of the research that we do out here is to benefit law enforcement and to move forensic science forward in areas such as grave recognition and how best to excavate burials,” said Dawnie Wolfe Steadman, director of the Forensic Anthropology Center at the University of Tennessee, Knoxville, who manages the research facility. To duplicate real-life scenarios, donors are left to decompose in various states—partially clothed, wrapped in plastic, placed in a car trunk, or in a garbage bin. “These are all things we can test,” Steadman said, “and directly help law enforcement figure out their cases better.”

This month marks the 20th year of the FBI’s sought-after Recovery of Human Remains course. During the five-day class, students learn and apply a rigid methodology of probing the ground to find clandestine graves and then unearthing the remains and documenting everything, including clues and potential evidence that might be buried in the surrounding soil. The goal is to collect as complete a picture as possible of the deceased.

“One of the things the students learn here is the forensic anthropology method,” said Heather Thew, a special agent on the FBI’s Evidence Response Team (ERT) Unit who organizes the course. “It’s based on years of archaeological science, concepts, and methods to recover not only the evidence and the remains, but also the information and the context of what is in those burials.”

That means everything gets thoroughly documented—from the presence of shell casings or other artifacts, which may have evidentiary value, down to the color and texture of the underlying soil. “We have our narrative notes about what we did out there, and all of that works together to tell the story,” Thew said. “And someday we need to tell the story to a jury.”

“The techniques that we are teaching are exactly how we hope they will approach every crime scene when they encounter buried remains.”

For the class, one of the FBI Laboratory’s most popular, students are separated into small groups led by Forensic Anthropology Center instructors. Each group is escorted to a separate isolated area on the wooded grounds and provided probes to poke into the soil and feel for anomalies or soft spots. When a potential burial site is discovered, students learn how to map it on a grid of twine and stakes and begin scraping away thin layers of dirt, which is sifted for clues. Students take turns measuring, documenting, and sketching as the contours of a skeleton begin to emerge. In turns, the groups are also pulled aside for seminar-style lessons, including one that shows how heat and fire affect dental work and another on how maggots can unlock some of the mysteries of the recently deceased. 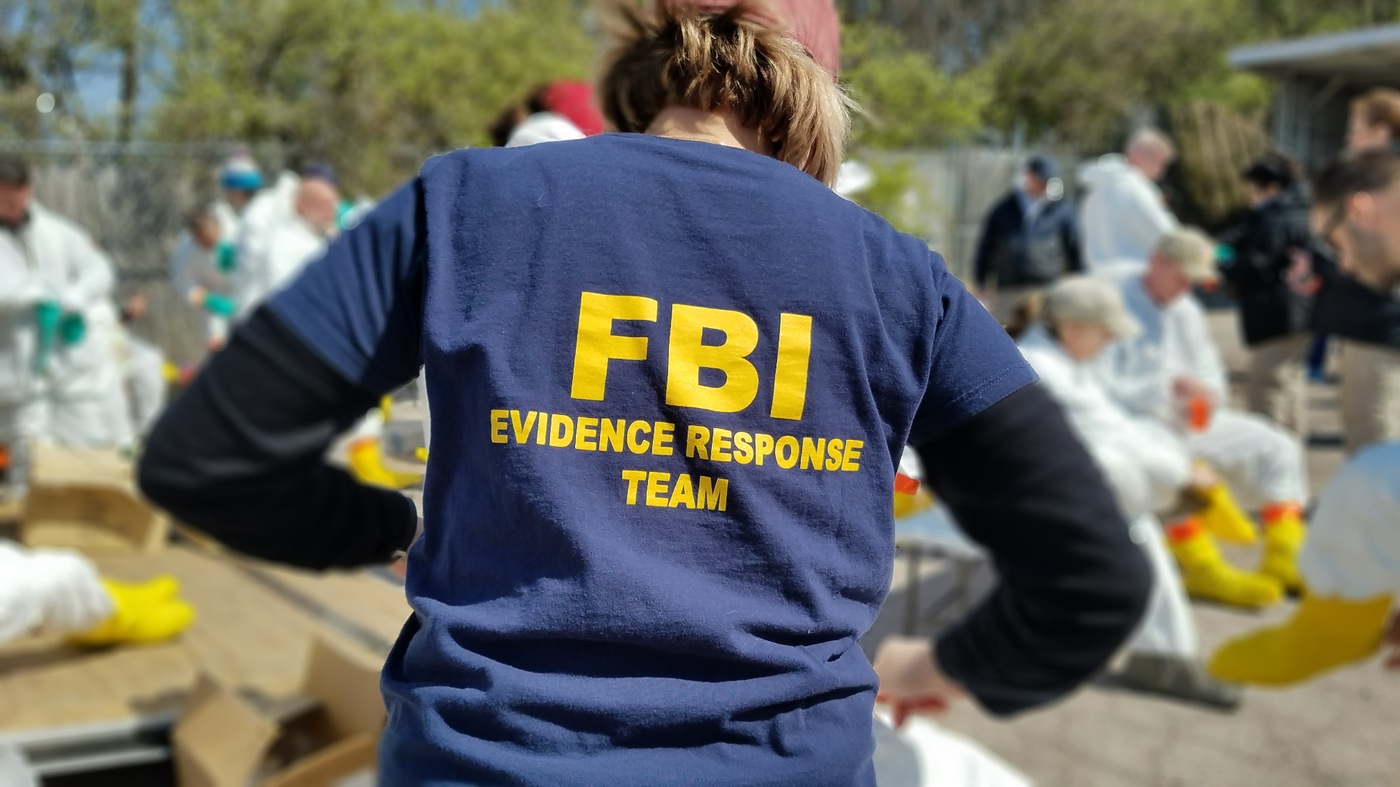 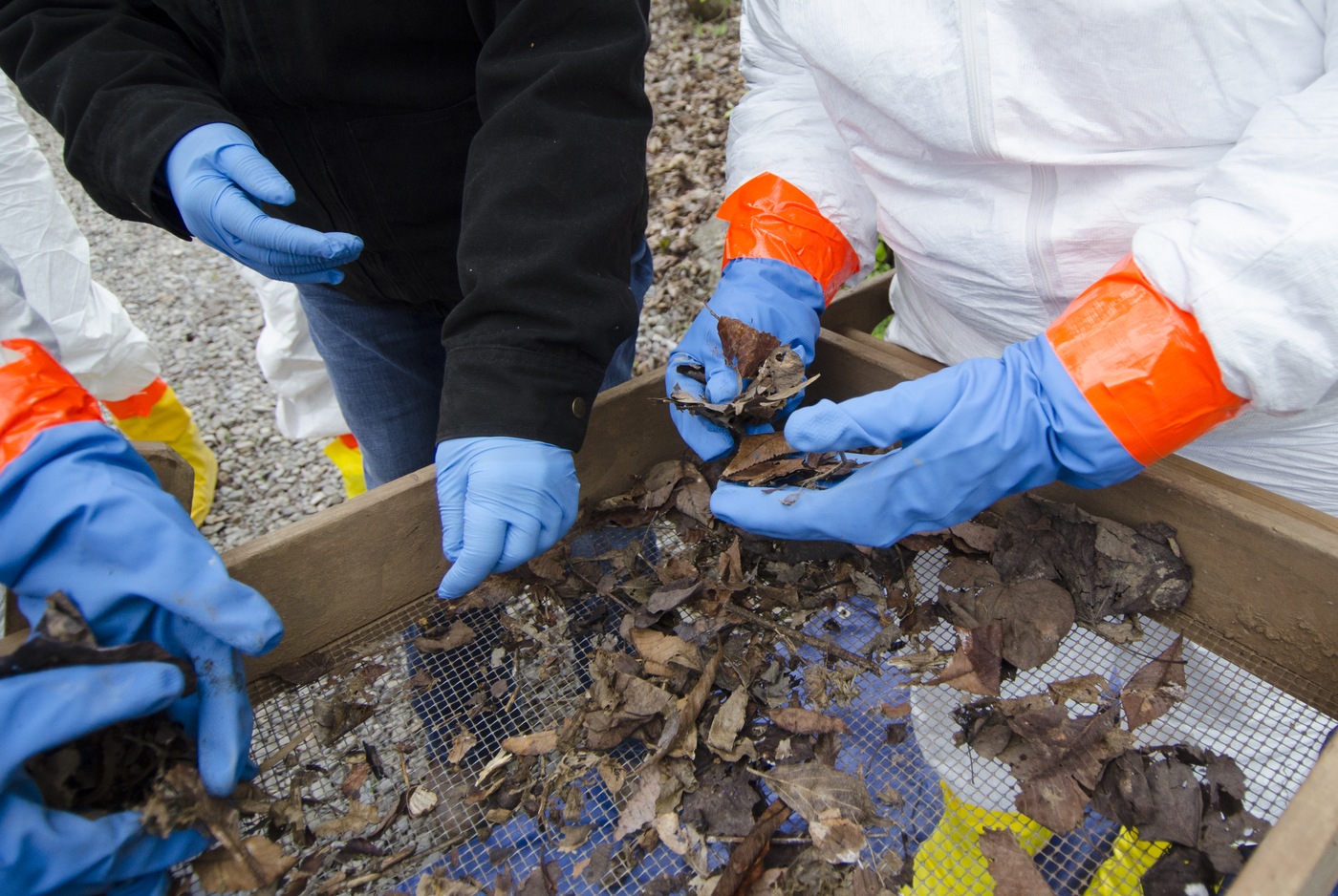 FBI Evidence Response Team members receive training each year at the Forensic Anthropology Center in Knoxville, Tennessee. Training this month marks 20 years for the unique partnership. Dawnie Wolfe Steadman, who manages the research facility, said managing an outdoor crime scene presents unique challenges for even the most seasoned investigators. "This is something that you really have to do to understand the complexities of it." 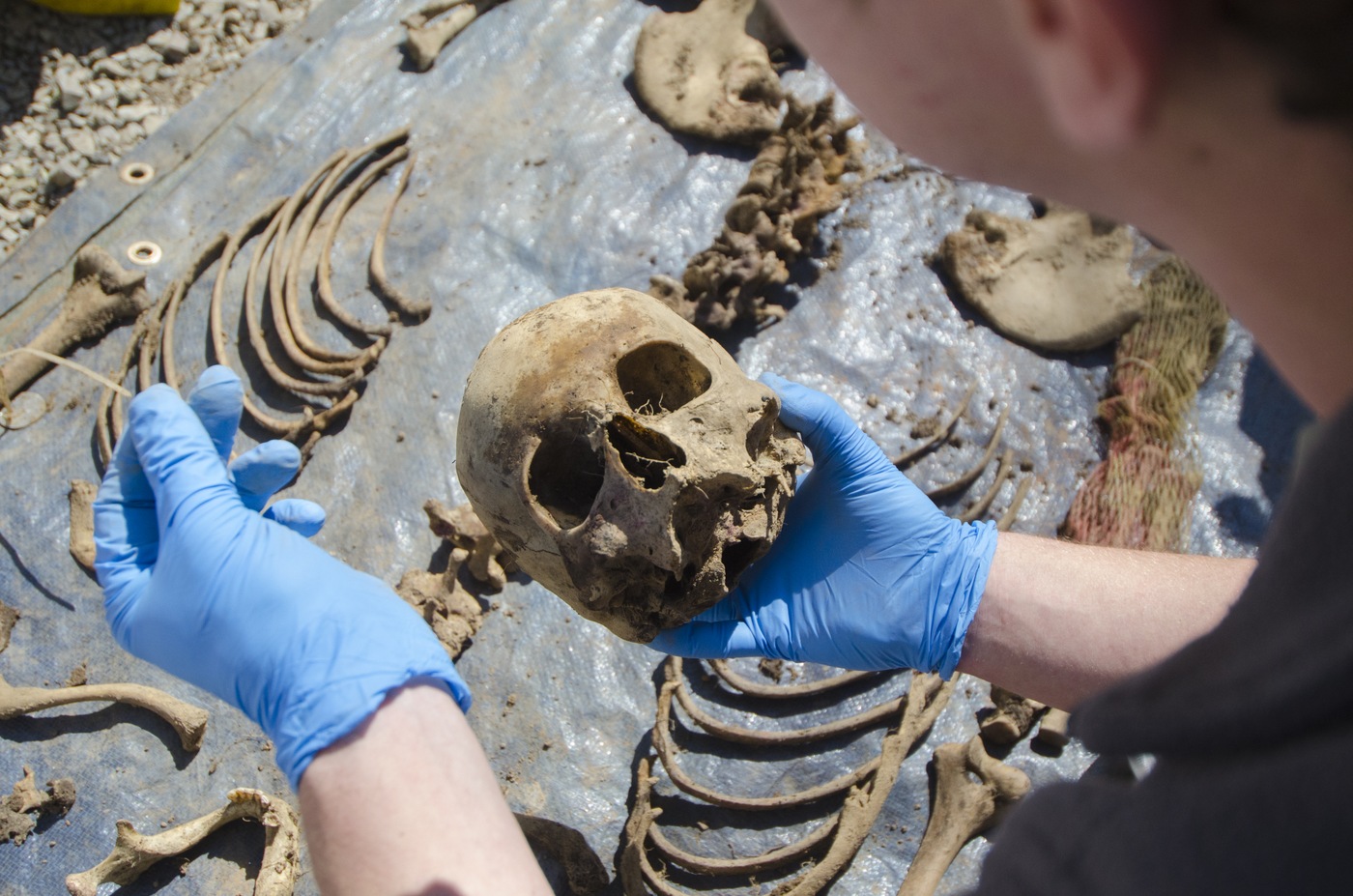 “The techniques that we are teaching are exactly how we hope they will approach every crime scene when they encounter buried remains,” said Steadman. “This is something that you really have to do to understand the complexities of it.”

Steadman said managing an outdoor crime scene presents unique challenges for even the most seasoned investigators. “If there’s a dead body in the living room of a house, they know how to approach that, they know how to map that—there’s an entry and an exit area that they take, and there are very clear ways of processing the indoor crime scene,” she explained. “You don’t know all the boundaries of this scene. There are no boundaries out here. And you don’t know where all the evidence might be. A cigarette butt at an outdoor crime scene—is that evidence or is it garbage?” 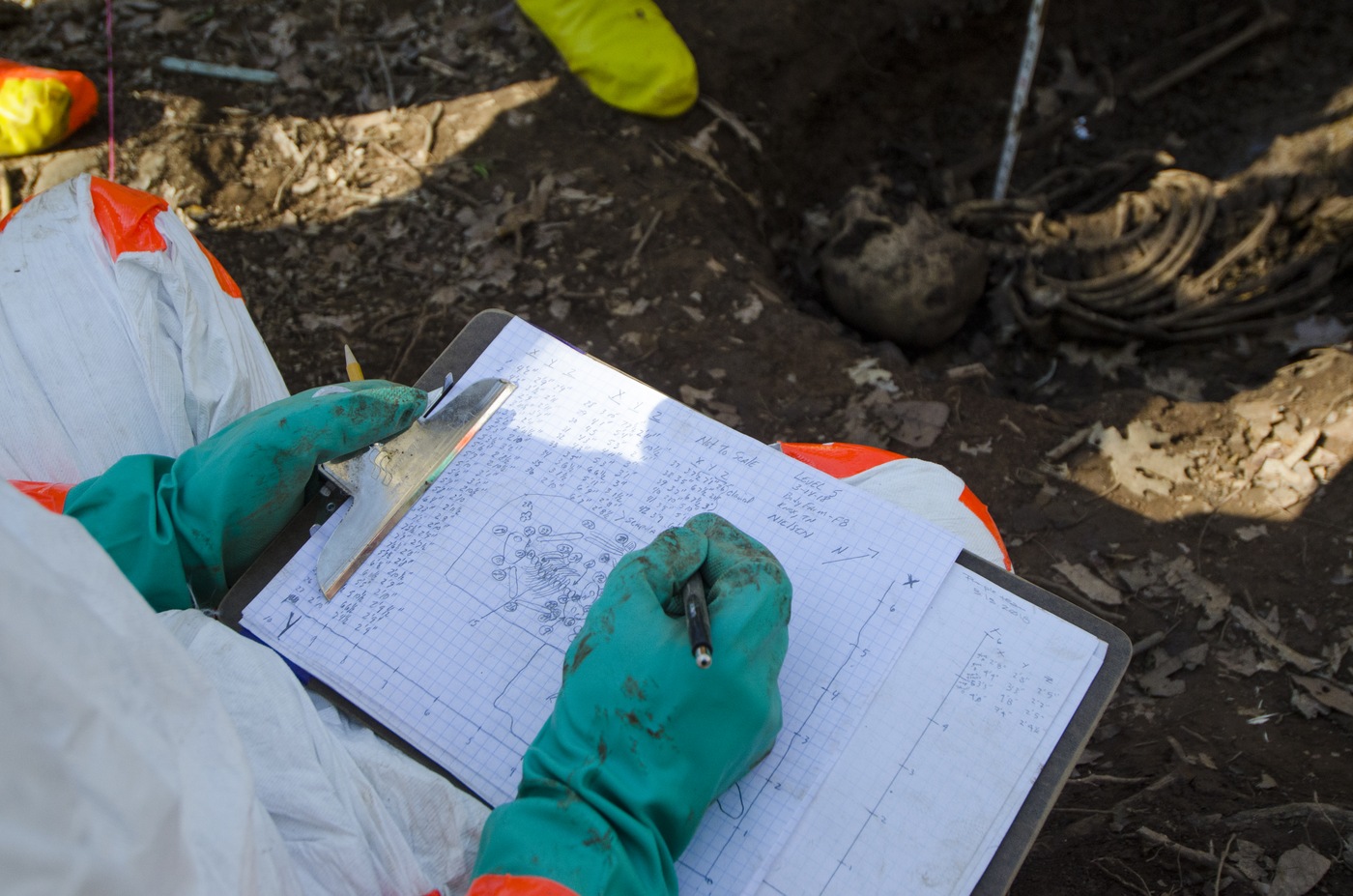 By the end of the course, students will have removed the remains from their burial sites and compiled a thick portfolio of documentary materials about their excavations, which in a criminal case would assist prosecutors but here becomes an instructional part of the research facility’s large skeletal collection. Students also finish with a broader understanding of crime scenes and evidence collection.

For one student, Barbara, a trace evidence examiner at the FBI Laboratory in Quantico, Virginia, the course illustrated the tough conditions under which crime-scene evidence is sometimes collected before it arrives on her desk at the Lab. “It helps us better understand where the evidence is coming from and how it is handled before we get it,” she said. “That gives us better communication with our agents out in the field, so we can tell them what we might need from them to help our analysis.” 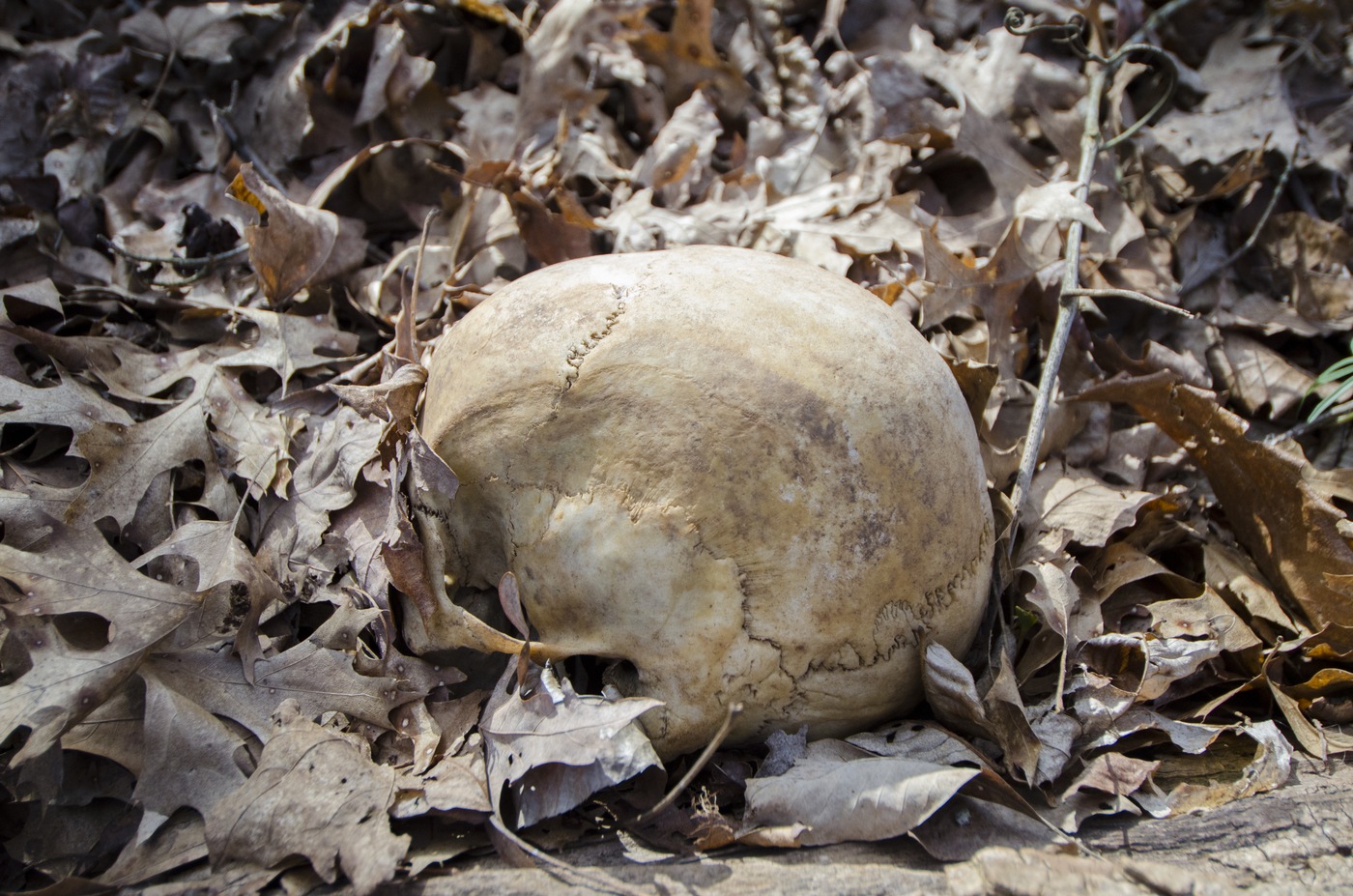 About the ‘Body Farm’

The Anthropology Research Facility was established in 1981 by anthropologist William Bass to study human decomposition and insect activity. It began with a single donated body and today has more than 150 human donors placed in various scenarios on the grounds. “The heart and soul of everything we do here is the people who donate their bodies to us,” said Dawnie Wolfe Steadman, director of the Forensic Anthropology Center at the facility, which has a skeletal collection of more than 1,700 individuals. “We have over 4,000 people from around the world who have donated their body to us while they are living. They feel strongly about the science that we do and they want to be a part of it. And I think one of the things that the donors feel very strongly about is that they are benefiting law enforcement, and particularly the FBI directly, by their gift of body donation.”

“Any mistakes made during the crime scene process could render evidence useless in court,” Gabriel said. “The beauty of this arrangement is the students that come to this class have already been trained in Evidence Response Team techniques, so the University of Tennessee now works with them to teach them techniques in forensic anthropology to defensibly collect remains in an environment like a clandestine grave.”

A company that was investigated for making false statements regarding the levels of formaldehyde in its laminate flooring products has agreed to pay a $33 million penalty for securities fraud.