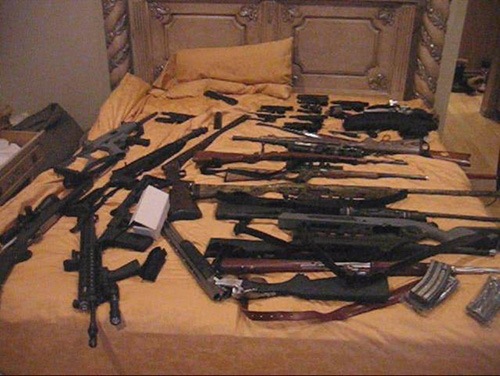 Shown here are some of the firearms seized during a multi-agency investigation into the activities of the California-based Armenian Power criminal enterprise.

The investigation revealed that this street gang was actually an international organized criminal enterprise whose illegal activities ranged from bank fraud and identity theft to violent extortion and kidnappings. It also revealed that this enterprise victimized its own Armenian community in California. By 2011, we had enough evidence to charge 90 Armenian Power leaders, members, and associates in two separate indictments.

Of those 90 charged, 87 have been convicted, including one of the enterprise’s primary leaders—Mher Darbinyan—who wasrecently sentenced to 32 years in prison. (Of the three remaining indicted individuals, prosecutors dropped the charges against one, and the other two are currently fugitives.)

According to Agent Jeremy Stebbins, who worked the case out of our Los Angeles Office, “With the arrests and convictions of nearly all senior leadership of Armenian Power, we dealt a serious blow to their ability to continue to operate in the manner they were accustomed. We also sent a message to the Eurasian organized crime community that they are being targeted and watched.”

Armenian Power leadership was based in California, but the group’s operations—particularly its fraud schemes—involved the use of phony businesses located in cities throughout the United States. And Armenian Power leaders had dealings with organized crime figures in places like Armenia and Russia.

During the course of the investigation, we rescued a kidnapped victim and were able to charge several additional subjects with kidnapping, extortion, and other violent crimes. We also seized more than $3 million in fraudulently obtained luxury automobiles. And we interfered in several violent confrontations between rival groups, arresting more gang members and seizing firearms.

Court-authorized wiretaps on 25 different phone numbers were a key part of the case. Through these conversations, we were able to obtain a wealth of incriminating evidence as defendants spoke about targeting wealthy Armenians for robbery, planning check fraud activity, making illegal firearms deals, installing skimmers on ATMs, watering illegal marijuana plants in a warehouse, mailing illegal narcotics to customers, planning kidnappings, and extorting money from victims using threats of violence.

This complicated and multi-subject case was investigated by the Eurasian Organized Crime Task Force, led by the Bureau’s Los Angeles Division and the Glendale Police Department. Other vital task force members include several local California police and sheriff’s departments and a number of federal agencies.

During the multi-agency investigation into the Armenian Power criminal enterprise, we were also able to identify the source of an information leak within the federal district court clerk’s office in Los Angeles. A clerk’s office employee and her husband were charged and later convicted for their roles in a scheme to access and disclose information contained in sealed court documents to tip off organized crime figures and gang members prior to their arrests. Some of those compromised records concerned individuals who were members or associates of the Armenian Power criminal enterprise and subjects of pending federal arrest warrants.

This kind of criminal activity often threatens the safety of law enforcement agents and officers—particularly during large-scale takedowns of violent criminal enterprises and their members.

Program gives kids information they need to stay away from crime and become good citizens.

Director Comey talks at the International Conference on Cyber Security at Fordham University.