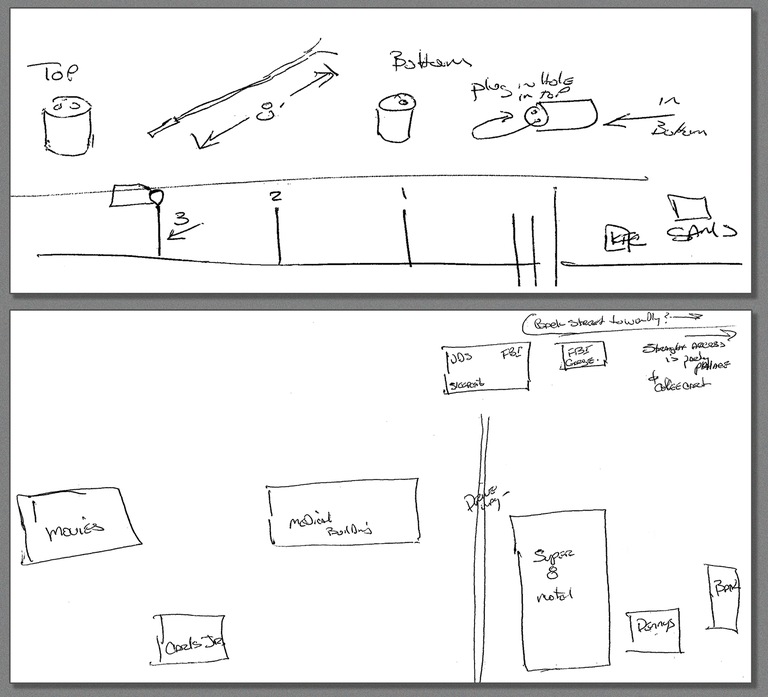 A sketch instructs a would-be hit man how to build a bomb. Another diagram points to the FBI’s Fairbanks office.

Chris Guy Mannino, a former chiropractor and gun and explosives dealer who lived in Fairbanks, Alaska, had scores to settle—and murder was how he planned to settle them.

After a messy divorce that did not go his way—in part because he had filed for bankruptcy and was under felony indictment for weapons charges—Mannino hired a hit man to kill his wife’s attorney. When the would-be killer turned out to be cooperating with the FBI, Mannino later hired a second individual to kill the original hit man. And his murderous intentions didn’t stop there.

“He had a hit list,” said Special Agent Derik Stone, one of the investigators who worked the case from the FBI’s Anchorage Division. That list included federal law enforcement personnel, including an FBI agent and two agents from the Bureau of Alcohol, Tobacco, Firearms, and Explosives (ATF).

“He wanted to kill the FBI agent, the main witness in the weapons case, and the individual he initially hired as a hit man,” Stone said. “He also wanted to kill a bankruptcy attorney and both ATF agents who investigated his case.”

Instead, the 57-year-old Mannino is in prison, having been recently sentenced to a 17-year term on a number of charges related to the murder-for-hire plot. Mannino’s problems began with financial issues. “He got in over his head and decided to file for bankruptcy,” Stone said. “But he tried to hide assets, including guns, in his wife’s name. And he also transferred an unregistered machine gun to another person without proper paperwork, which is a felony.”

The one-time president of the Alaska Machine Gun Association was indicted by a federal grand jury in August 2013 for a number of charges related to the unlawful possession and transfer of prohibited weapons, including a machine gun and silencers. In 2014, while awaiting trial on those charges and others related to his bankruptcy, Mannino hired a hit man to murder the attorney.

After the plan unraveled and he was in custody at the Fairbanks Correctional Center, Mannino attempted to hire another hit man—a fellow prisoner about to be released to a halfway house—to kill the original hit man and carry out the other murders. He told that individual where to find a cache of explosives, instructed him on how to shape explosive charges for maximum effect, and drew a map of the FBI office in Fairbanks. He made specific and gruesome requests. He wanted the hit man to travel to Tennessee, for example, to kill one of the ATF agents and then rig the graveside with a bomb so it would kill everyone else who came to the funeral.

Fortunately, the second would-be hit man contacted authorities. Mannino was federally indicted again in 2015, this time for soliciting murder. After a four-day trial in February 2016, he was found guilty. Imposing his sentence in June, a federal judge in Fairbanks noted the jury’s conclusion that Mannino intended for the murders to actually occur, rather than his conduct simply being “jail house talk” between inmates as Mannino had contended.

“He was angry, and he was serious about the killings,” Stone said. “He had the tools and capabilities to do what he said he was going to do.”

“He wanted to kill the FBI agent, the main witness in the weapons case, and the individual he initially hired as a hit man.”

The Future Agents in Training program provides a hands-on approach to educating high school juniors and seniors on FBI operations.

After being convicted in the first-ever federal prosecution for spoofing, a futures trader who generated $1.4 million in illegal profits was sentenced to federal prison.