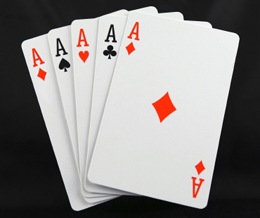 It’s been billed as the “largest domestic bribery and bid-rigging scheme in the history of federal contracting cases.”

Specifically, over a five-year period, more than $30 million was illegally siphoned from federal coffers by a ring of crooked public officials and government contractors in the D.C. area operating via bribes, kickbacks, and other dirty dealings.

A big fix, especially in lean budget times. The plot was thickening, too—a billion-dollar government contract was about to be steered illegally into favored hands in exchange for sizeable payments under the table.

But ultimately the hammer fell, and fell hard, following a massive, multi-year investigation by the FBI and its partners called Five Aces (a reference to cheating by stacking the deck) that came to light in October 2011 after the first arrests. A total of 15 federal employees and contractors—plus one company, Nova Datacom—have since pled guilty. That includes the mastermind of the conspiracy, Kerry Khan, who just last week was sentenced to nearly 20 years in prison.

Khan, while serving as a program manager and contracting officer’s technical representative for the U.S. Army Corps of Engineers, cooked up the bribery scheme in 2006 with his co-worker Michael Alexander to take their own piece of the contracting pie.

The case evolved into a complicated conspiracy, involving six different companies and several shady practices. The FBI began its investigation in the summer of 2009, when we received a tip indicating that an area business was submitting phony references and evaluations to boost its chances of getting government contracts. The company, we discovered, also had a disabled veteran falsely posing as its owner—which gave it an advantage under federal contracting laws.

We soon learned that Khan and his criminal colleague had created a network of crooked contractors who agreed to pay them bribes and kickbacks in exchange for winning deals. In most of those cases, the contracts were fulfilled and the work done, but often times there were extra charges disguised as “overhead” on the bills…and most of that money ended up in Khan’s pockets. In other instances, Khan awarded contracts to straw subcontractors and paid fake invoices submitted by the fictitious companies.

For the members of the criminal conspiracy, it was a lucrative enterprise—especially for Khan, who was paid, directly and indirectly, more than $12 million. Khan used the money to live large: in addition to paying off his mortgage and remodeling his house, he purchased flat screen TVs, computers, luxury watches, airline tickets, accommodations in five-star hotels, high-end liquor, and a dozen properties in three states. And apparently, money is thicker than blood in some cases—Khan got his son and brother involved in the scheme (both have since pled guilty).

Five Aces was a multi-agency undertaking from the start, with the FBI and its partners uncovering vital evidence using sophisticated investigative techniques, including consensual recordings by cooperating witnesses and court-authorized wiretaps. We heard details about crimes directly from the mouths of the criminals committing them.

Justice has been served, and, just as importantly, more than $32 million is being rightfully returned to the U.S. government and the American people. It’s another case in point as to why the FBI continues to focus squarely on public corruption as its top criminal investigative priority.

All in the Family - Part 1: Husband, Wife, and Son Stole Millions from Armored Cars

A federal judge sentenced a PA man to eight years and six months in prison for soliciting others to engage in acts of terrorism within the United States and for using a firearm in relation to an assault on FBI agents.