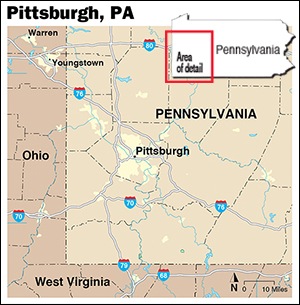 Those who have met Emerson Begolly in person might describe him as a shy young man. But online, the 24-year-old was the complete opposite—he forcefully incited jihadist violence against Americans and Jews. And when FBI agents attempted to talk to him in 2011, he reached for a loaded handgun in his pocket and then bit the agents who disarmed him.

Today, a federal judge sentenced Begolly to eight years and six months in prison for soliciting others to engage in acts of terrorism within the United States and for using a firearm in relation to an assault on FBI agents. Begolly pled guilty in August 2011 after being indicted less than a month earlier.

“This is a guy who definitely had the potential to hurt people,” said Special Agent Blake McGuire, who led part of the investigation from our Pittsburgh office. “He was a disaffected U.S. citizen who was susceptible to the message of violent extremism, and he became self-radicalized on the Internet. That type of offender—the so-called lone wolf—is extremely dangerous,” McGuire added, “because they can be difficult to discover before they resort to violence.”

Begolly came to the FBI’s attention in 2010 when he began posting violent material on an Islamic extremist Internet forum. Using the pseudonym Abu Nancy, the Pennsylvania resident and occasional college student solicited fellow jihadists to use firearms and explosives against American police stations, post offices, Jewish schools and daycare centers, military facilities, train lines, and water plants. He further urged his audience to “write their legacy in blood” and promised a special place in the afterlife for violent action in the name of Allah.

Members of the Bureau’s Joint Terrorism Task Forces in Pittsburgh and in Northern Virginia worked on the case with U.S. attorneys in both jurisdictions. “We all shared the same concern,” McGuire said, “that something might trigger this young man to carry out his own personal jihad.”

Begolly was under surveillance during the summer of 2010 when he legally purchased an assault weapon. Several months later, he escalated his online postings by soliciting jihadists to violence by posting a manual on how to manufacture a bomb.

Shortly after the bomb-making post, agents obtained search warrants for the homes of Begolly’s parents, where he often stayed. While the searches were being conducted, two other agents approached Begolly at a fast food restaurant near Pittsburgh to speak with him. That’s when he reached for the loaded handgun in his pocket. As the agents subdued him, he bit their fingers, trying to free himself and reach for his gun. His actions were consistent with a previous online post in which he urged jihadists not to be taken alive by law enforcement and to always carry a loaded firearm.

“When you combine troubling rhetoric that escalates with weapons, it poses a tremendous threat to public safety,” McGuire said. “Fortunately, we headed off any potential danger before it happened.”

Over a five-year period, more than $30 million was illegally siphoned from federal coffers by a ring of public officials and government contractors in the Washington, D.C. area operating via bribes, kickbacks, and other dirty dealings.

The FBI has posted pictures and information about 28 rare maps and books in the hopes that the individuals or institutions who own them will come forward to claim them.