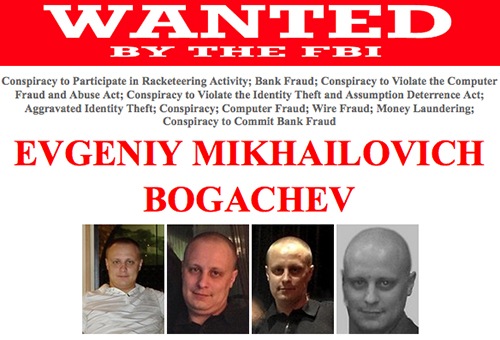 Today in Washington, D.C., the U.S. State Department, the Department of Justice, and the FBI announced a reward of up to $3 million for information leading to the arrest and/or conviction of Evgeniy Mikhailovich Bogachev, currently one of the FBI’s most wanted—and most prolific—cyber criminals, for his alleged involvement in a major cyber racketeering enterprise. The reward is being offered under the auspices of the State Department’s Transnational Organized Crime Rewards Program, established by Congress in 2013 as a tool to assist the U.S. government in identifying and bringing to justice members of significant transnational criminal organizations.

Bogachev, thought to be at large in Russia, has been under indictment in the United States in connection with his alleged role as administrator of the GameOver Zeus botnet, believed to be responsible for the theft of more than $100 million from businesses and consumers in the U.S. and around the world. GameOver Zeus was an extremely sophisticated type of malware designed specifically to steal banking and other credentials from the computers it infected by either secretly logging keystrokes for passwords or creating false webpages where victims would unwittingly enter banking information and passwords.

According to FBI Assistant Director Joseph Demarest, “This was a worldwide infection, but it also had law enforcement worldwide working to combat it and bring to justice the criminal organization behind it.” In addition, he thanked private sector partners who played a role during the investigation and in reducing the number of computer infections.

Added Demarest, “We are turning to the world again for assistance in locating Bogachev. While he is known to reside in Russia, he may travel. With this $3 million reward incentive, someone, somewhere may see him and let the authorities know his whereabouts.”

Nearly a dozen fraudsters behind a $40 million scam will be spending time behind bars.