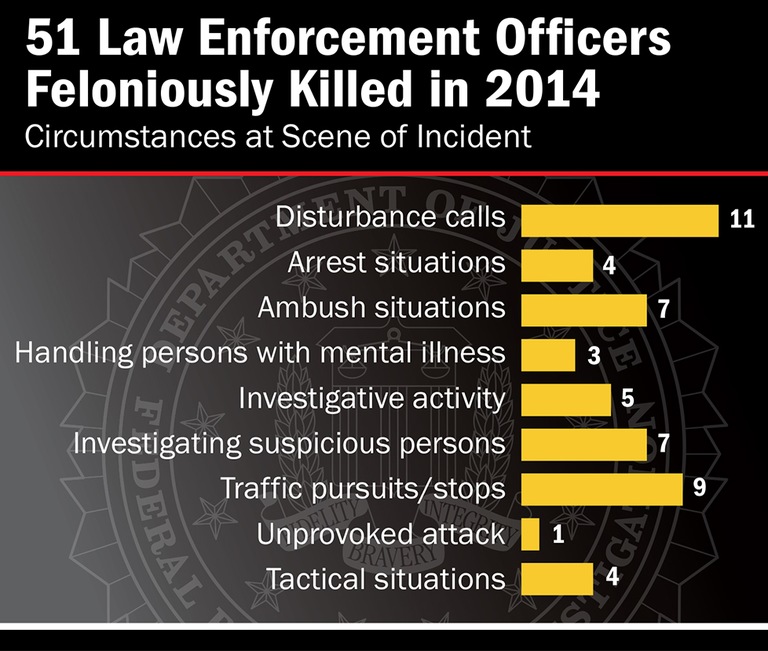 On May 29, 2014, a 42-year-old trooper with the New York State Police made a traffic stop on an interstate highway north of Binghamton. The veteran trooper parked behind the stopped car and approached the driver’s side window. In that fleeting moment, a truck traveling in the same direction at about 90 miles per hour suddenly swerved, sideswiping the car and striking the trooper, killing him instantly. The truck’s driver, a 60-year-old male with a criminal record, admitted after his capture that he intentionally veered to hit the trooper.

The chilling account of the unprovoked attack is just one of dozens of detailed narratives recounting the felonious deaths of law enforcement officers in the United States in 2014. The accounts are a central component of the latest Law Enforcement Officers Killed and Assaulted (LEOKA) report, issued today, which shows that 96 law enforcement officers were killed in the line of duty last year—51 as a result of felonious acts and 45 in accidents. The annual report, released by the FBI’s Uniform Crime Reporting (UCR) Program, also shows that 48,315 officers were victims of line-of-duty assaults in 2014.

In addition to the narratives, the online-only report includes comprehensive data tables that provide a closer look at the incidents: officer profiles, circumstances, weapons, locations, and identified suspects.

The felonious deaths of the 51 officers—all males—occurred in 24 states and Puerto Rico. The figure represents a significant increase over the number that occurred in 2013, when 27 officers were killed, but is lower than the numbers from 2009 (56 officers) and 2005 (55 officers).

Among the report’s findings:

In addition to collecting details about the critical aspects of fatal confrontations and assaults, the FBI’s LEOKA Program conducts extensive research on the data that eventually gets incorporated into officer safety awareness training the FBI provides for partner agencies.

Cyber Tip: Defense in Depth for the Everyday User

Home users can apply “Defense in Depth” principles to protect their own personal data.

Director Comey urged closer ties between police and communities at a forum in Ohio.