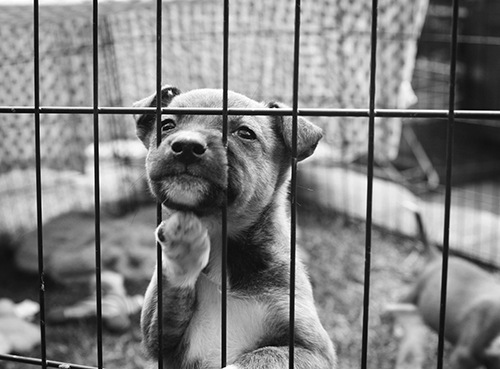 Acts of cruelty against animals are now counted alongside felony crimes like arson, burglary, assault, and homicide in the FBI’s expansive criminal database.

On January 1, the Bureau’s National Incident-Based Reporting System (NIBRS) began collecting detailed data from participating law enforcement agencies on acts of animal cruelty, including gross neglect, torture, organized abuse, and sexual abuse. Before this year, crimes that involved animals were lumped into an “All Other Offenses” category in the FBI’s Uniform Crime Reporting (UCR) Program’s annual Crime in the United States report, a survey of crime data provided by about 18,000 city, county, state, tribal, and federal law enforcement agencies.

By adding animal cruelty offenses to NIBRS, law enforcement agencies and the advocacy groups that pushed for the inclusion in the FBI database are hoping the results will reveal a more complete picture of the nature of cruelty to animals.

“Some studies say that cruelty to animals is a precursor to larger crime,” said Nelson Ferry, who works in the Bureau’s Criminal Statistics Management Unit, which manages NIBRS. “That’s one of the items that we’re looking at.”

The National Sheriffs’ Association was a leading advocate for adding animal cruelty as a data set in the Bureau’s collection of crime statistics. The association for years has cited studies linking animal abuse and other types of crimes—most famously, murders committed by serial killers like Ted Bundy, Jeffrey Dahmer, and the “Son of Sam” killer David Berkowitz. The organization also points out the overlap animal abuse has with domestic violence and child abuse.

“If somebody is harming an animal, there is a good chance they also are hurting a human,” said John Thompson, deputy executive director of the National Sheriffs’ Association. “If we see patterns of animal abuse, the odds are that something else is going on.”

A first look at NIBRS animal cruelty statistics will be available next year, but it will take at least three to five years for the data to begin showing helpful patterns. Groups that advocated for the new animal cruelty data hope that by adding it to NIBRS—rather than the summary-based statistics agencies provide the Bureau each year—they will get a much richer data set from which to mine. That’s because NIBRS requires participating agencies to not only report crimes but also all the circumstances of a crime. Additionally, the Bureau plans to phase out summary-based UCR statistics—which have been collected roughly the same way since 1930—in favor of NIBRS by 2021.

“With summary data, all I can tell you is a crime occurred,” said Amy Blasher, who is leading the broader transition to NIBRS at the FBI’s Criminal Justice Information Services Division, keeper of the Bureau’s various crime data stores. “With the incident-based, it’s more granular. It tells the story.”

The move to collect more granular data requires agencies to adjust how they track and disseminate crime statistics. Only about 31 percent of the country is represented in NIBRS today—a fraction of the overall UCR participants; however, Blasher anticipates the figure to grow larger as law enforcement agencies opt in, including police departments in Washington, D.C. and Chicago over the next two years. The FBI is aggressively pushing for the transition to NIBRS. In a speech last March in Atlanta, FBI Director James Comey said it was his personal mission to get better data “that we can all use to have informed conversations about the most important issues we face.”

Those who lobbied for better animal abuse data would agree. “With this information, law enforcement and victim services would be able to better target their intervention efforts with respect to both animal cruelty and those crimes for which animal cruelty serves as a marker,” said Dr. Mary Lou Randour of the Animal Welfare Institute, which worked closely with the National Sheriffs’ Association to advance their cause. “Identifying and analyzing animal cruelty crimes would provide an important tool for law enforcement.”

The National Sheriffs’ Association’s John Thompson urged people to shed the mindset that animal cruelty is a crime only against animals. “It’s a crime against society,” he said, urging all law enforcement agencies to participate in NIBRS. “By paying attention to [these crimes], we are benefiting all of society.”