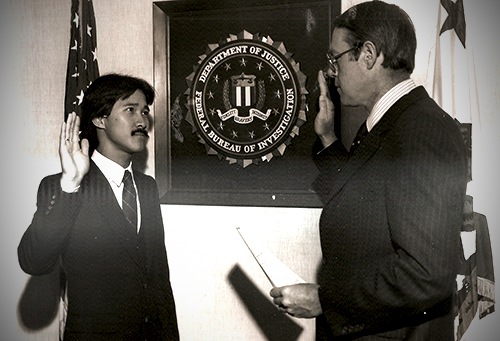 Fred Wong, seen here taking the FBI oath, became a special agent in 1982. He played a key role in the arrest of a Top Ten fugitive in 1984, and served as head of FBI offices in Belgium and Indonesia before retiring in 2007.

When William Wang joined the FBI as a special agent in 1966, the number of known agents of Asian ancestry could be counted on one hand. There was no official tally, Wang said, because Director J. Edgar Hoover didn’t find it necessary to keep count.

“Under Mr. Hoover, you are either a special agent or not a special agent,” said Wang, who was born in China, immigrated to the United States in 1956, and became the Bureau’s fifth known agent of Asian ancestry. “As far as he was concerned, we’re all special agents—period.”

Over the years, Wang took it upon himself to keep track of the number, and he reached out personally to new agents of Asian descent as they came through training at the FBI Academy in Quantico, Virginia. “It was important to me to just let them know that I’m here,” he said.

The role of agents of Asian ancestry over the past 50 years—since Edwin Yee and Calvin Shishido were sworn in as agents in 1965—was a centerpiece of this year’s annual national conference of the Society of Former Special Agents of the FBI. Retired Special Agent Ellen Glasser, who was president of the society during the September gathering in Reno, Nevada, said it was a fitting time to honor them for the “special value and needed diversity” they brought to the FBI’s ranks.

William Wang served from 1966 to 1988 in Seattle, New York, and the Washington Field Office. He is believed to be the fifth agent of Asian ancestry hired by the FBI.

A former teacher, John Uda served from 1979 to 2004 with assignments in Los Angeles, Salt Lake City, and FBI Headquarters.

JoAnn Sakato served from 1978 to 2002. She was the first female FBI agent of Asian ancestry. Her assignments included Los Angeles and Phoenix, where she coordinated training and the National Academy.

Chris Loo served from 1978 to 1999 in the San Francisco Field Office, where he was instrumental in recruitment of agents of Asian ancestry and development of San Francisco's Asian Organized Crime Program.

“We decided this was an opportunity to do something really important and to create a historical marker for their 50 years of service,” Glasser said, speaking to hundreds of former agents, but specifically addressing the cadre of Asian former agents in attendance. “By celebrating your achievements and your loyalty, we here in the FBI family want to publicly say thank you and job well done.”

In conversations, many recalled being recruited into the Bureau specifically because of their backgrounds, both professional and ethnic.

Kingman Wong, who served from 1988 to 2012, said the San Francisco Field Office was looking for agents with Chinese language skills when he was recruited. He landed on an Asian organized crime squad there, which propelled him to other undercover assignments in Hong Kong and Thailand.

Kingman Wong served from 1988 to 2012 in San Diego, San Francisco, and New York, where he was in charge of special operations. He also served as legal attaché of FBI offices in Ottawa and Hong Kong.

A former police officer, Nelson Low served from 1983 to 2010 in Las Vegas and San Francisco, where he did extensive undercover work investigating Asian organized crime.

Fred Wong served from 1982 to 2004 in San Francisco, Honolulu, Los Angeles, and Seattle, where he was instrumental in the capture of a Top Ten fugitive. He also served as legal attaché at FBI posts in Brussels and Jakarta.

Joseph Louie served from 1966 to 1990 and is the third known special agent of Asian ancestry. He served in San Diego, San Francisco, and Honolulu and was legal attaché at FBI posts in Manilla and Hong Kong.

Weysan Dun's 30-year career, from 1982 to 2012, included 11 different assignments—among them serving as special agent in charge of field offices in Springfield (Illinois), Omaha, and Newark.

“I found the ethnicity a plus in helping to get the foot in the door.”

Chris Loo also worked in the San Francisco office, from 1978 to 1999. He remembered his boss assigning him to applicant recruitment, specifically to reach out into the Asian community. He did that successfully for two years—hiring a number of future legal attachés to run our overseas offices—before returning to an organized crime squad, where he helped launch the office’s Asian organized crime program.

“Your ethnicity certainly helps open doors in the community,” said Loo, recalling an interview with a potential witness who was Chinese. “He was very hesitant to speak to me, and his sponsor said, ‘Don’t be afraid to speak to Mr. Loo. He’s with the FBI and he’s Chinese.’ I found the ethnicity a plus in helping to get the foot in the door.”

The former agents also encountered some strains of discrimination but generally brushed it off and rose above it. JoAnn Sakato, who served from 1978 to 2002 and was the first Asian woman agent in the FBI, chalked up any racist or sexist slights to ignorance.

“As a Japanese female, I think some of the agents expected a geisha,” she said. “Well, that’s not what they got when they hired me. A funny story is that in the Los Angeles Field Office they would call me Dragon Lady. I suppose in some contexts it could be a derogatory term. I decided to adopt that as my moniker and made it my own. I guess I established certain reputation for taking no prisoners. I adopted that, and that was my persona.”

Today there are nearly 600 active special agents of Asian ancestry, a figure roundly regarded as too low. Director Comey frequently cites the FBI’s diversity statistics in public remarks about how the FBI needs to better reflect the people it serves.

“Diversity is about doing the right thing, but also about effectiveness,” Comey said at the National Organization of Black Law Enforcement Executives annual meeting last March. “It’s about being good at what we do. We are simply less effective when we are less diverse.”

The earliest Asian agents largely dismiss the descriptive modifier in their title—much as the first women agents did in 1972. Like his colleagues, Joe Louie, the third known Asian to be hired as an agent in 1966, just wanted to be called an agent—period. “I don’t think they really cared if you were black, white, or purple,” he said. “If you were selected for being an agent, that was a prime job.”

Frederick Wong’s career, from 1982 to 2007, may best illustrate the point. He was one of Chris Loo’s hires who went on to become a legal attaché, not once but twice. His first overseas office was in Belgium. “I remember some of my colleagues in Belgium, the Netherlands, and Luxembourg, they were quite surprised, but pleasantly surprised that ‘you aren’t all white agents,’” he said. “It was a big plus. It helped me open doors.”

In his 30 years as an FBI agent, from 1982 to 2012, Weysan Dun worked his way up the management ladder. He was a special agent in charge (SAC) of three field offices and saw firsthand, repeatedly, how important it is to reflect the people you serve. In an interview, he described the evolving perception of law enforcement in the Asian community and why it’s important to have senior agents of Asian ethnicity in the Bureau.

“Some of the ethnic communities with which I had to deal, I think were partly disarmed by the fact that they never expected to see an Asian guy as the head of the FBI office.

“When I was an SAC in Newark, the local Asian community there actually was so enthralled that there was an FBI executive of Asian ethnicity because they never even dreamed that was a possibility . . . they actually did an article for me in a Chinese language periodical (above). They were just amazed that there was an Asian executive in the FBI. Frankly, as a result of that, it caused them to say, ‘We really need to be a little more open and welcoming when we do run across the FBI.’ ”

“For nearly half of the FBI’s history now we’ve had Asian agents and I think that’s very significant. And I think it’s also significant because it shows the continuing interest of the Asian community to be part of an organization like the FBI.

“I think one of the things that having agents of Asian ethnicity help with is the fact that culturally in some Asian societies, law enforcement was not viewed as a prestigious profession. Of course in the United States, particularly with the FBI, it is.

“I know my parents were shocked when I initially told them that’s what I wanted to do. Although they supported me, I could tell they were thinking ‘of all of the careers to choose, this is the one you would want to choose.’ In their culture it was not viewed as a prestigious job.

“Once I started achieving success they were very proud and supportive, but I know there are many Asian cultures and many Asian families where I think a young person interested in a career might be discouraged. So the fact that you have people who are senior agents of Asian ethnicity and who are executives and supervisors and managers, when they see that, they say, ‘you know what, maybe that is a good career and something that my child or my daughter or my son should go into.’

“And it also gives assurance to those candidates, to those potentially interested, that there is a place for me in the FBI.”

Protect Your Wallet and Your Information This Holiday Season

Be aware of the increasingly aggressive techniques of cyber criminals who want to steal your money and your personal information.