As evidenced by this investigation, the threats we face have never been more pervasive or more potentially damaging to our national security. And no country poses a broader, more severe, and long-term threat to our nation’s economy and cyber infrastructure than China.

China’s goal, simply put, is to replace the U.S. as the world’s leading superpower—and they’re breaking the law to get there. They’re using an expanding set of non-traditional and illegal methods. And Chinese state-sponsored actors are the most active perpetrators of economic espionage against us.

In short, they seek to strengthen themselves and weaken the United States. And while we welcome fair competition, we cannot and will not tolerate illegal hacking, stealing, and cheating.

Now, we’re not talking about the Chinese people as a whole. We’re focused on state-sponsored actors engaged in illegal behavior. These aren’t just Chinese officials, employed by the Chinese government. They can be hackers, businessmen, researchers, or front companies acting on behalf of state actors. And often they’re recruiting or co-opting employees of American companies—people who are trusted insiders.

As noted, the actors named in this indictment were members of a hacking group operating in China that is associated with the Chinese Ministry of State Security—a group known as APT 10. The members of APT 10 conducted major computer intrusion campaigns, targeting U.S. government agencies and companies both in the U.S. and around the world, and stealing hundreds of gigabytes of intellectual property and confidential business information. 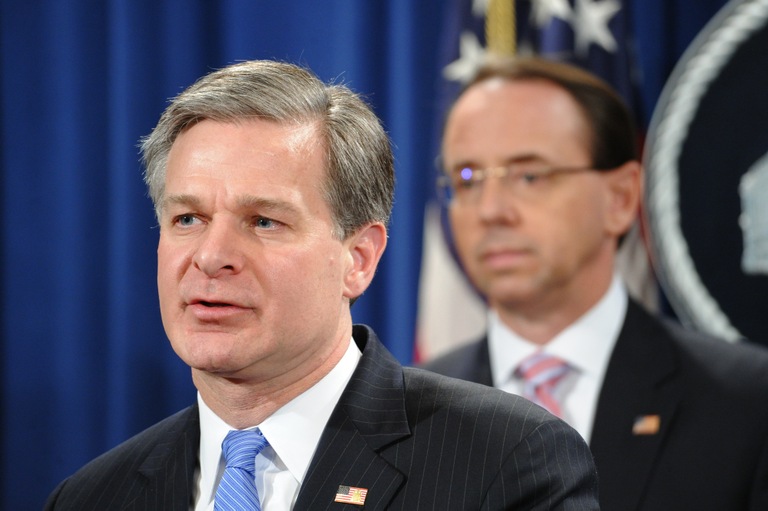 The list of victim companies reads like a “Who’s Who” of the global economy—from biotechnology to agriculture to health care, and from oil and gas exploration to NASA.

Healthy competition is good for the global economy. Criminal conduct is not. Rampant theft is not. Cheating is not.

There’s no light on this issue between the United States and our law-abiding international partners. We’re all standing shoulder-to-shoulder to condemn this conduct.

The scope of this investigation was broad, as you might imagine, including our FBI field offices in New Orleans, New York, Sacramento, San Antonio, and Houston.

And we’re incredibly grateful not only to our DOJ colleagues, but to our partners at the Naval Criminal Investigative Service, the Defense Criminal Investigative Service, and the Department of Homeland Security for their work. We also appreciate our partners in the Department of Defense’s Computer Forensic Laboratory, who worked with us as we analyzed hundreds of malware samples. With this malware, FBI and NCIS investigators found key links between major victims and APT 10’s “command and control” infrastructure.

After identifying additional victims here in the United States and around the world, the FBI’s Cyber Action Team—our elite rapid deployment unit—and our cyber counterparts at DHS deployed to multiple locations to provide technical support and investigative assistance. And we worked with our counterparts in the NCIS to investigate APT 10’s theft of personally identifiable information from more than 100,000 U.S. Naval service members.

We’re deeply concerned about American innovation ending up in the wrong hands, including by nation-states like China, intent on stealing the fruits of our research, our economic investment, our development, and our hard work for their own gain.

This is conduct that hurts American businesses, American jobs, and American consumers. The Chinese government’s not pulling any punches. They want what we have so they can get the upper hand on us. And they’re highly strategic in their approach—they’re playing the long game.

But let me make it perfectly clear: No country should be able to flout the rule of law So we’re going to keep tackling this illegal behavior with everything we’ve got—every investigative technique, every piece of intelligence, and every partnership, from our federal, state, local, and international partners, to our private sector, community, and academic partners.

And we’re going to keep calling out this state-sponsored behavior for what it is—illegal, unethical, and unfair.

It’s going to take all of us working together to protect our economic security and our way of life. The American people expect and deserve no less.