The FBI Washington Field Office, along with the Virginia State Police, Manassas City Police Department, and the Office of the Commonwealth’s Attorney Prince William County, seek assistance from the public to identify an unknown individual or individuals responsible for the brutal murder of Virginia State Trooper Johnny Rush Bowman in Manassas, Virginia.

On August 19, 1984, at approximately 4:15 a.m., Virginia State Trooper Johnny Rush Bowman was brutally attacked and stabbed 45 times by an unknown assailant(s) while off-duty at his home located near Patterson Place in Manassas, Virginia. Trooper Bowman, who was unarmed at the time, engaged in a struggle with the individual(s) that awakened his 2-year-old daughter in the home. Trooper Bowman later succumbed to his injuries.

“For 34 years, Trooper Johnny Bowman’s daughter, parents, brother, friends, and colleagues have had to endure his loss and not knowing who was responsible for taking his life,” said Captain Greg Kincaid, Virginia State Police Bureau of Criminal Investigation’s Fairfax Field Office. “That’s why still today, the Virginia State Police and our partnering agencies remain determined to solve this homicide and bring Johnny’s killer to justice.” 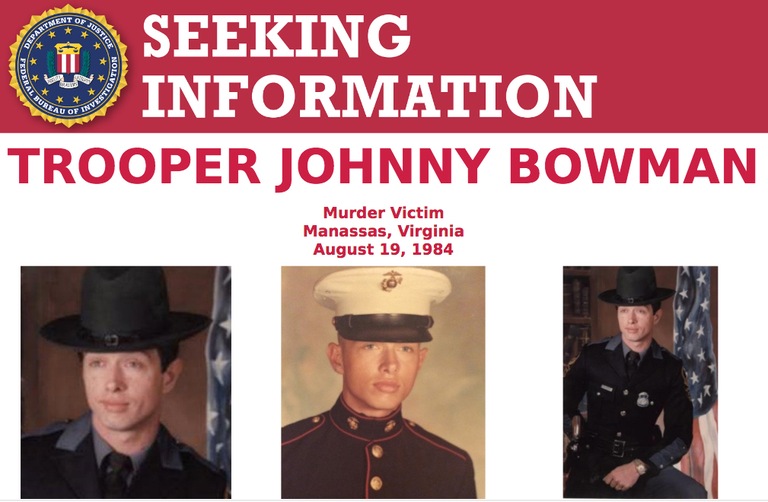 “No one has forgotten Trooper Bowman—not his family, his friends, and certainly not law enforcement,” said Matthew J. DeSarno, Special Agent in Charge of the FBI Washington Field Office’s Criminal Division. “The public is our best weapon in solving this cold case and we are hoping that with the passage of time, and through a significant reward of $50,000, someone with information no matter how small or large will come forward and help us bring closure to the family and justice to Trooper Bowman.”

A detailed story that includes photographs of Trooper Bowman and an interview with his daughter, Nikki Bowman, is available at: https://www.fbi.gov/news/stories/seeking-info-in-1984-murder-of-virgina-trooper-johnny-bowman-092418

The FBI is offering a reward of up to $50,000 for information leading to the arrest and conviction of the person(s) responsible for the violent murder of Johnny Rush Bowman.

Law enforcement agencies are asking anyone with information about this crime to call the FBI at 1-800-CALL-FBI (1-800-225-5324) or the Virginia State Police at 703-803-2676. You may also contact your local FBI office, the nearest American Embassy or Consulate, or submit a tip online at tips.fbi.gov. All tips can remain anonymous.