The FBI’s Seattle Division has received reports of email and text message-based scams in which the perpetrators are defrauding individuals in Washington State by imitating various Chinese law enforcement agencies. The FBI has identified that these scammers may be targeting Chinese citizens on student visas at local colleges and universities, as well as Chinese citizens on work visas. Losses of nearly $100,000 per victim have been reported in the state of Washington to date in 2018.

The FBI wants the public to learn about this scheme in order to avoid being victimized if contacted by these scammers. The FBI also encourages those who believe they have been defrauded by this scam to report their financial losses to legitimate law enforcement for investigation. Reporting this type of fraud as soon as it occurs increases the likelihood that law enforcement will be successful in its investigation.

In 2018, at least five individuals in Washington State were told by scammers, via email or text message, that they were under investigation in China for money laundering or other crimes, and that they were required to send money to the law enforcement agency supposedly investigating them.

As part of the scam, victims have been told they have two choices to resolve alleged criminal accusations against them: they can return to China and go to prison, or they can transfer money to a specific account for “analysis” to prove that they are not involved in money laundering or other crimes. Faced with these options, victims have then transferred money to the financial account specified by the scammers. Additionally, victims have been asked to provide their passport numbers and other personally identifying information to those posing as law enforcement.

If contacted by parties representing themselves as Chinese law enforcement, individuals should strive to verify the authenticity of the communication. Contact the law enforcement agency through official channels such as email address or phone number on the official agency website to confirm the identity of those contacting you. Finally, individuals can reduce their chances of being victimized by protecting their personally identifiable information such as date of birth or passport number.

It is important to be aware that e-mails or text messages may appear to be from a law enforcement agency, when they are actually from scammers. email spoofing—the forgery of an email header so that the message appears to have originated from someone or somewhere other than the actual source—is a common tactic in many scams.

If you or someone you know has been targeted by this Chinese law enforcement impersonation fraud, contact the FBI’s Seattle Division at (206) 622-0460.

In addition, all types of fraud schemes and scams can always be reported to the FBI’s Internet Crime Complaint Center (IC3) at https://www.ic3.gov. The following information is helpful to report:

Filing a complaint through the IC3 website allows FBI analysts to identify leads and patterns from the high volume of complaints received daily for referral to the appropriate law enforcement agency for response.

The IC3 website explains ways to reduce the risk of becoming a victim various types of fraud: https://www.ic3.gov/preventiontips.aspx

For additional information on other types of scams, please visit the FBI’s Scams and Safety page: https://www.fbi.gov/scams-and-safety 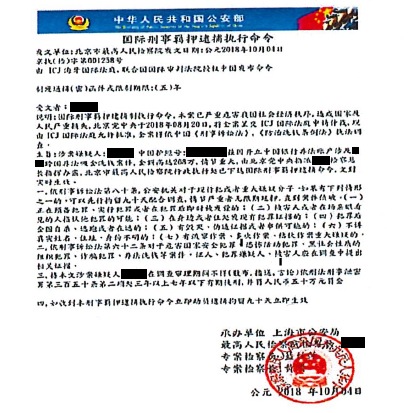