On December 19, 2014, in a ceremony at the FBI Seattle field office, Special Agent in Charge (SAC) Frank Montoya, Jr., congratulated Mr. Hassan. In May 2015, FBI Director James B. Comey will present Mr. Hassan with the 2014 Director’s Community Leadership Award in a ceremony at FBI Headquarters. 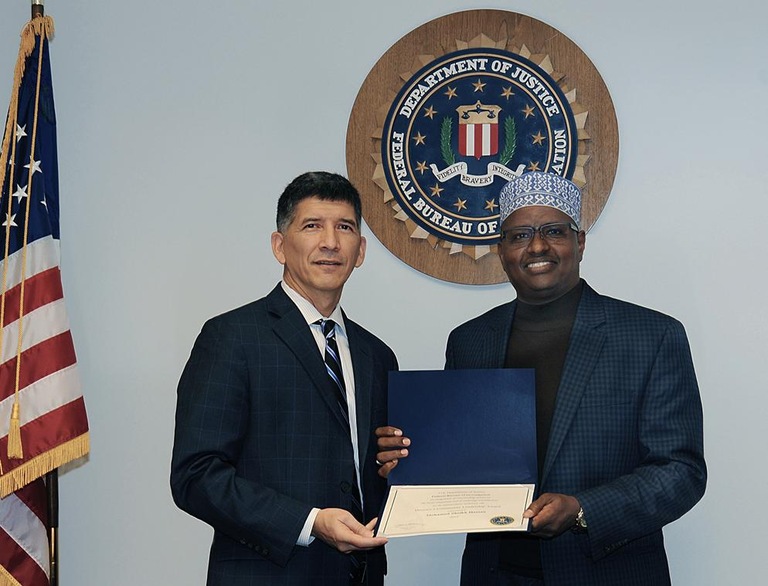 “Mr. Hassan has a long record of creating platforms that assist fellow refugees in successfully transitioning to American society and in becoming active, positive participants in their communities,” said SAC Montoya. “Further, Mr. Hassan brings the community and law enforcement together, often serving as a bridge between minority groups and law enforcement.”

“Relationships matter,” said Mr. Hassan upon receiving the DCLA certificate from SAC Montoya. “It’s a very challenging time, but we need to continue to build relationships. The FBI can do its job better when it has relationships with the community.” He elaborated that it’s important that the community understands the FBI’s work and knows the people who comprise the FBI. With that familiarity comes trust, which makes the community feel comfortable to report crimes, particularly if they are the victims of bias-motivated activity.

Mr. Hassan immigrated to the United States from Somalia in 1994. He currently works for the Seattle Office of Immigrant and Refugee Affairs as a community relations coordinator. He previously worked 16 years with Trac Associates as a community jobs program coordinator.

Mr. Hassan is also the founder of Afrique Service Center. Afrique is a non-profit organization working in Rainier Valley that helps East African refugees with their social service needs. Mr. Hassan has worked on issues of empowering refugees from East Africa to make their voices heard. In this capacity, he regularly participates as a representative the community in local decision making.

Mr. Hassan has been the vice chair of Tri County Refugee Planning Committee for two years, the president of African Media Center, a member of the Seattle Police Department’s East Africa/Muslim/Ski/Arab Advisory Council, a member of the Complete Count Committee Census 2010, a member of the Rainier Beach Neighborhood Plan Advisory Committee, on the Board of Directors of One America, and part of the United Way of King County Children’s Leadership Counsel.

Mr. Hassan holds an MBA from Fresno University and a B.S. in accounting from SIDAM Somali. He and his wife are the proud parents of six children, who have received their education through Seattle Public Schools.

Since 1990, the Director’s Community Leadership Award has been a principal means for the FBI to publicly recognize the achievements of individuals and organizations that make extraordinary contributions to crime prevention, violence prevention, and education in their communities.