The FBI’s Seattle Field Office selected Sammamish, Washington, resident Son Michael Pham for its 2018 Director’s Community Leadership Award (DCLA). Every year, each FBI field office honors a person who has demonstrated outstanding contributions to his or her local community through service.

As a 2006 graduate of the FBI Seattle Citizens Academy, Mr. Pham has been a longtime supporter of law enforcement.

On February 27, 2019, in a ceremony at the FBI’s office in Seattle, Special Agent in Charge (SAC) Raymond P. Duda congratulated Mr. Pham. In May 2019, FBI Director Christopher Wray will present Mr. Pham with the 2018 DCLA award in a ceremony at FBI Headquarters.

“Son Michael Pham is connecting communities in Washington State with each other and with the world,” said SAC Duda. “The FBI applauds Mr. Pham’s dedication to teaching children to embrace diversity and care for those in need. The Seattle Field Office is honored to announce his selection as this year’s Director’s Community Leadership Award recipient for the state of Washington.”

A Vietnam War refugee, the generosity and care of Chicago community church members profoundly impacted Mr. Pham when he arrived in the United States in 1975. Mr. Pham has dedicated his life to extending the kindness he experienced to others by championing causes for improving the lives of children, both locally and internationally. 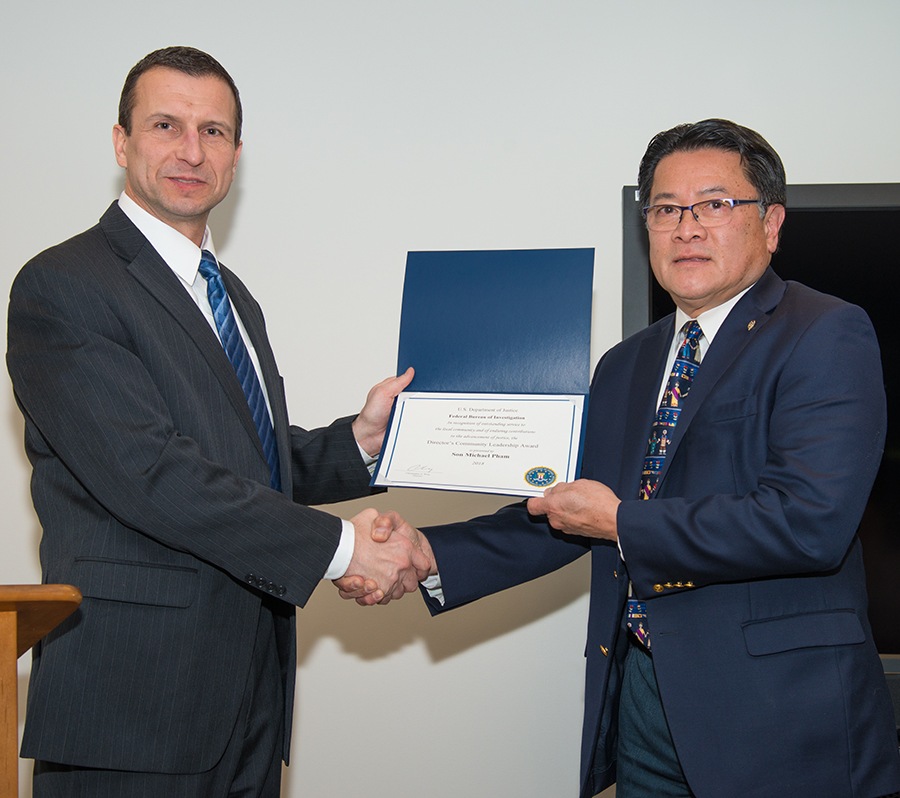 As a member of Rotary International, Mr. Pham embodies the organization’s motto, “Service above self.” Mr. Pham actively supports charitable programs of the University District Rotary Club that serve the Puget Sound region and international communities. He also facilitates donations to the Tukwila Children’s Clothing Bank and Seattle Ronald McDonald House, as well as local refugee communities. In addition, he serves as an advisory board member of the Asia Injury Prevention Foundation, which worked with Vietnam lawmakers to create a children’s motorbike helmet law.

Mr. Pham creates opportunities for young people in the Puget Sound region to experience the power of charitable giving through his nonprofit organization Kids Without Borders. For example, he coaches them on how to run donation drives for supplies to address hygiene and clothing needs of other children. He believes strongly that by empowering children to help other children, they will begin to recognize more similarities than differences in each other.

The mission of Kids Without Borders is to inspire and involve youth in service to others in their communities and worldwide. Mr. Pham originally launched Kids Without Borders as a school service project for students to sort clothes and donated items for Puget Sound area children.

Today, the organization supports and works with children in more than 30 countries, and has an international volunteer base.

Through Kids Without Borders, Mr. Pham mentors and partners with local high school students to organize the annual Hope Festival, a year-round service project helping homeless and low income people. In addition, Kids Without Borders partners with the Seattle-based group called The Marah Project, which supports and educates kids, parents, and the public about the disease of addiction. The Marah Project also supplies law enforcement with Narcan, a life-saving drug for opioid overdose.

Mr. Pham’s accomplishments and service extend even further beyond the Puget Sound community through his work with Kids Without Borders and other organizations. His involvement with initiatives to improve the safety and wellbeing of children in the global community includes:

For the countless ways that he positively impacts the Puget Sound and international communities, the FBI honors Son Michael Pham with designation as Washington State’s 2018 DCLA recipient.