At around 3:30 this morning, July 11, 2017, an unknown male robbed the Hon-Dah Casino on the Fort Apache Reservation at gunpoint.

The suspect was wearing a gray-blue suit and white shoes. He’s described a middle-aged male, 5'5 to 5'7 with a slender build. He had a black, white, and red facial/head covering.

He has acne scars on his neck/cheeks. He also used a black, semi-automatic handgun during the robbery.

The suspect was in the casino for less than 90 seconds. He got away with an undisclosed amount of money and was seen leaving on foot, heading East toward the town of McNary.

No one was physically injured.

The FBI is investigating this along with the White Mountain Apache Police Department. 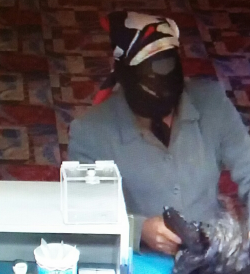