FBI Announces Reward of Up to $25,000 for Information Leading to Justin Smith's Arrest

FBI Announces Reward of Up to $25,000 for Information Leading to Justin Smith's Arrest

As the FBI’s Violent Crimes Task Force continues to assist the Philadelphia Police Department with the search for Justin Smith, the FBI is announcing a reward of up to $25,000 for information leading to Smith’s location and arrest.

Smith is wanted for murder in the death of his pregnant 21-year-old girlfriend, who disappeared on March 30, 2021, and whose body was found on April 5, 2021. Smith is alleged to have shot the woman in the head multiple times, causing her death and the death of her unborn child.

On April 9, 2021, Smith was charged with murder and related offenses in the 1st Judicial District in Philadelphia County, Pennsylvania, and a state warrant was issued for his arrest.

Justin Smith is known to have connections to Greensboro, North Carolina, and New Castle, Delaware. He has also been seen in the Little Haiti neighborhood of Miami, Florida, and in Atlanta, Georgia.

Anyone with information on Smith’s whereabouts is asked to contact the FBI at 215-418-4000 or tips.fbi.gov. Tipsters can remain anonymous. 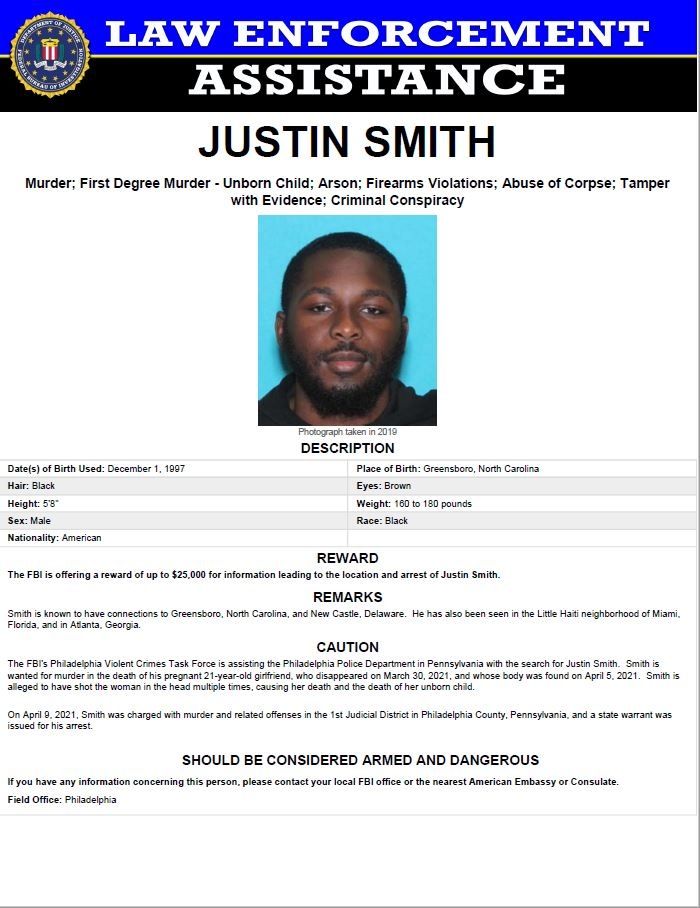