The Freedom Summer of 1964 was the crux of a tumultuous time in America’s history, and much of the civil rights-related struggle was happening in Mississippi. The disappearance of three civil rights workers in a case that came to be known as Mississippi Burning garnered national attention, and the FBI did not turn a blind eye.

On July 10, 1964, FBI Director J. Edgar Hoover personally traveled to Mississippi to re-open the FBI’s Jackson Field Office, which had been closed since 1946, to search for the missing civil rights workers and to more effectively address the increasing civil rights conflict within the state.

A half-century later, we recognize the Jackson Field Office for the pivotal role it has played over the years. At a ceremony held at the Jackson Division’s headquarters today, FBI and state officials joined civil rights era figures, FBI employees, law enforcement partners, and others to celebrate the occasion.

“Today, we mark more than just a 50-year anniversary,” said FBI Director James Comey in a video message for the event. “We honor an office that opened during some of the darkest times in our country’s history. We recognize agents who bore a heavy responsibility—agents who lived up to that responsibility for every citizen, of every color.”

FBI Deputy Director Mark Giuliano, who spoke at the ceremony, expounded on this sentiment. “As we mark the anniversary of the Jackson Division, and of the Freedom Summer, we must recognize every single person who marched for freedom, even at great risk to their own safety,” he said. “Every person who took important and meaningful steps, both large and small, toward liberty and justice for all.” 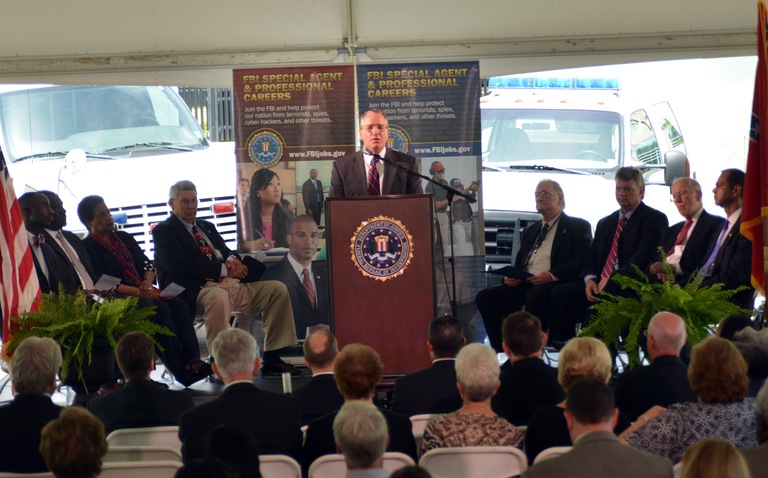 The concept of liberty and justice for all is of utmost importance to the Bureau. “That is what the Jackson office stands for,” Giuliano added. “It is what the FBI stands for. And we are proud to be part of America’s history—and its future.”

Check back next week for an in-depth article reflecting on the historical circumstances that led to the opening of the Jackson office in 1964 and on how that office has—from the beginning—played a vital role in the FBI’s civil rights program.