Paul Abbate, Special Agent in Charge of the FBI Detroit Field Office; Sheriff Larry Stelma of the Kent County Sheriff’s Department; and Chief Michael Patton of the West Bloomfield Police Department announced a $10,000 reward for information leading to the identification, arrest, and conviction of two unidentified suspects for their involvement in the April 22, 2014 armed robberies of Medawar Jewelers in Grand Rapids, Michigan, and Tapper’s Diamonds and Fine Jewelry in West Bloomfield, Michigan.

David Briley, Shaheed Calhoun, Orlando Johnson, and Nathaniel Pembrook, all from Philadelphia, have been arrested and are in custody for the robberies. Two suspects (one pictured below) are still at large, and it is believed that they are also from the Philadelphia area. 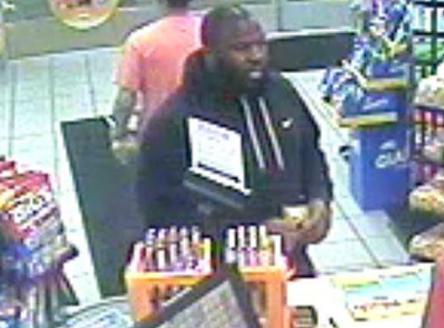 On April 22, 2014, Briley, Calhoun, Johnson, Pembrook, and two unidentified suspects robbed Medawar Jewelers located on Plainfield Ave. in Grand Rapids and, a few hours later, Tapper’s Diamonds and Fine Jewelry located on Orchard Lake in West Bloomfield. In both robberies, the perpetrators entered the stores during business hours with their faces covered or partially covered and brandished a firearm while ordering employees and customers to the floor. During the Medawar Jewelers robbery, Pembrook was shot in the arm by one of the store owners. Blood recovered from the scene was DNA tested and determined to be a match for Pembrook.

Anyone with information related to the April 22, 2014 armed robberies of Medawar Jewelers in Grand Rapids and/or Tapper’s Diamonds and Fine Jewelry in West Bloomfield is encouraged to contact the FBI Detroit Field Office 24 hours a day (313-965-2323 or https://tips.fbi.gov), Crime Stoppers of Michigan (1-800-SPEAK-UP or www.1800speakup.org), or Kent County Silent Observer (1-866-774-2345 or www.silentobserver.org).

Every defendant is entitled to a fair trial in which it will be the government’s burden to prove guilt beyond a reasonable doubt.