October Bank Robbers Wanted by the FBI in New Mexico

October Bank Robbers Wanted by the FBI in New Mexico

Although these robberies were previously publicized, the FBI is asking the public to take another look at the photos and descriptions for the following bank robberies. Anybody with information should immediately contact the FBI at (505) 889-1300.

Tips also can be submitted online at https://tips.fbi.gov.

The FBI may pay a reward of up to $1,000 for information leading to the arrest and conviction of a bank robbery suspect.

Suspect description: Female, approximately 40-45 years old, about 5’ to 5’4” tall, and weighing about 170 pounds. She wore dark sunglasses; a short, black wig with bangs; a large navy blue sweatshirt with an unknown design; dark pajama pants with skull images on them; and white tennis shoes. 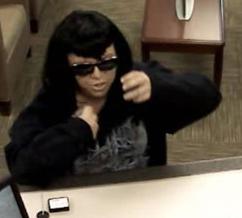 Suspect Description: Hispanic male, approximately 5’10” tall, with a heavy build. He wore sunglasses, a baseball cap that was covered by the hood of a dark jacket, a green or camouflage bandanna that covered the lower half of his face, dark pants that may have had paint on them, white gloves, and work boots. He is believed to have fled in an older-model black vehicle.

Suspect Description: Black male in his early to mid-40s, approximately 5’9” tall, with a thin to medium build. He wore a black baseball cap with a flat bill, a lime green windbreaker, a dark undershirt, and dark pants. He had brown eyes and broken teeth along the bottom row.

Suspect Description: Black female, approximately 25 to 30 years old, with a large build. She wore sunglasses and a green camouflage military uniform with a matching cap. She carried a large black bag and had a short haircut.

Suspect Description: Possibly Hispanic or Native American, about 5’8” tall, with a stocky, athletic build, a mustache, goatee, and an unshaven face. He wore a light-colored cowboy hat with a dark band, brown sunglasses, a gray T-shirt, blue jeans, and construction-type shoes.

Suspect Description: Possibly Hispanic or Native American male, about 6’ tall, with a slender build. He wore a white hat and sunglasses, a gray sweatshirt with hood, blue jeans, and white shoes. He had a thin mustache.

Suspect Description: Hispanic or Native American male, approximately 35 years old, about 5’10” tall, and weighing about 180 pounds. He appeared to have a short, dark goatee. He wore a black baseball cap with an unknown dark logo on the left front, sunglasses, a black T-shirt, blue jeans, and black and white sneakers. He also wore what appeared to be a long, black wig.

Where: Bank of the West, 5228 Central Ave SW., Albuquerque

Suspect Description: Hispanic male, about 5’5”-5’7” tall, heavy-set, middle-aged to older. He wore a green plaid, long-sleeved shirt; a tan, wide-brimmed hat; clear glasses; and a bushy, black beard that may have been fake. He was last seen in a beige car with an Oakland Raiders bumper sticker on it.

Bank robbery is punishable by a 20-year prison sentence for each offense, and the penalty increases if a dangerous weapon is used in the commission of the crime.

Information and FBI wanted posters on bank robberies in New Mexico and across the United States can be found at https://bankrobbers.fbi.gov.