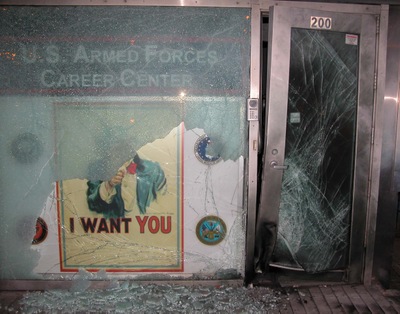 File footage of a suspect setting off a bomb outside the United States Armed Forces Recruiting Station in New York City’s Times Square on March 6, 2008. The suspect is also shown riding a blue “Ross” bicycle in various locations.

The FBI is offering a reward of up to $100,000 for information leading to the identification, arrest and conviction of the person(s) responsible for the 2008 bombing of the United States Armed Forces Recruiting Station.

Early on the morning of Thursday, March 6, 2008, a bomb exploded in front of the United States Armed Forces Recruiting Station in New York City’s Times Square. The device, which was built using an ammunition can similar to those found on the battlefields in Iraq and Afghanistan, was filled halfway with black powder and detonated using a time fuse. Although no one was wounded, the device could have caused significant injury and casualties if people had been close to the blast.

The suspect rode a blue "Ross" bicycle west on 37th Street, took a right heading north on Sixth Avenue, and made a left heading west on 47th Street before turning left to head south on Seventh Avenue. The suspect got off the bike near the recruiting station at West 43rd Street and Seventh Avenue, placed the explosive device at the recruiting station, lit a fuse, returned to the bicycle, and fled the scene. The suspect rode the bike south on Broadway before making a left on 38th Street. The bike was later recovered in a dumpster near Madison Avenue and 38th Street.

Although the suspect appears to be working alone, he or she may have had a lookout or surveillance team of as many as five individuals located in Times Square at the time the device was placed. The suspect was last seen wearing a gray sweatshirt and pants of an unknown color. The height, weight, age, sex, and race of the suspect are unknown.

Details of this bombing are similar to those of two other unsolved bombings that occurred in New York City, one at the British Consulate in May of 2005, and the other at the Mexican Consulate in October of 2007. All of the devices were delivered by an individual on a bicycle and were detonated between 3 a.m. and 4 a.m. The incidents may be connected.

If you have any information concerning any of the three bombings, please contact the FBI's New York Office at 1-212-384-1000, your local FBI office , or the nearest American Embassy or Consulate. Tipsters may remain anonymous.