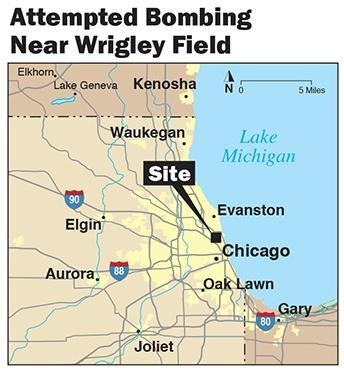 A federal judge has sentenced an Illinois man to 23 years in prison for an attempted bombing in 2010 near Chicago’s Wrigley Field that was intended to cause mass casualties and paralyze the community.

On that Saturday evening in September, while a concert was taking place at the Chicago Cubs baseball stadium, Sami Samir Hassoun placed a backpack that he thought contained a powerful bomb into a trash can on a nearby crowded street.The device was a fake—supplied by an FBI undercover agent—but had it been real, the effects would have been “horrific,” according to the judge who sentenced Hassoun yesterday.

A Lebanese citizen legally living in Chicago, Hassoun never posed a danger to the public, thanks to an investigation led by our Joint Terrorism Task Force (JTTF) in Chicago. But the 25-year-old would-be terrorist had earlier told an accomplice—who was really an FBI undercover agent—that any casualties from the attack would be the inevitable result of what he termed “revolution.”

Noting that the JTTF consists of Chicago police officers and other federal, state, and local law enforcement personnel in addition to FBI agents, Special Agent Sam Hartman—who served as co-case agent with Chicago Police Detective Angel Lorenzo—explained that “a case like this doesn’t have a successful outcome unless everybody pulls together. The JTTF played a key role in this investigation.”

“I am proud of the work done by our investigative team in preventing Hassoun from carrying out his intended act of violence,” said Cory B. Nelson, special agent in charge of our Chicago Field Office. “The FBI remains vigilant in our mission to prevent attacks against Americans.”

We were initially alerted to Hassoun by an informant who warned that Hassoun was hoping to profit from committing extreme acts of violent in Chicago. “He had no qualms about potentially killing lots of people,” Hartman said. “And he wanted money in return.”

Hassoun pled guilty to attempted use of a weapon of mass destruction and attempted use of an explosive device, and he admitted telling a law enforcement informant that he suggested bombing the commercial area surrounding Wrigley Field. The informant later introduced Hassoun to an undercover FBI operative who posed as an accomplice. Hassoun also said he was willing to use a car bomb and to attack Chicago police officers.

On three occasions in August 2010, Hassoun videotaped potential targets around Wrigley Field, focusing on popular bars and restaurants. As he filmed, he commented on the tactical advantages and risks of an attack at the various locations.

On the night of September 18, Hassoun was ready to set his plan in motion. He took a shopping bag and a backpack from our undercover agents that he thought contained a powerful bomb. The agents said the device was surrounded by ball-bearings and that the blast could destroy half a city block. A few minutes after midnight, after he had helped set the device’s timer, Hassoun placed the backpack into the trash container on the crowded sidewalk by the stadium.

“Hassoun was an example of the so-called lone offender,” Hartman said. “He had no ties to organized terror groups, but he was clearly a terrorist—and potentially an extreme danger to the public. We were fortunate to have stopped him.”

A look at an FBI program that helps injured soldiers continue to serve the country.