Thirty-five leaders, members, and associates of one of the most brutal gangs operating along the U.S.-Mexico border have been charged in a federal indictment in Texas with various counts of racketeering, murder, drug offenses, money laundering, and obstruction of justice.

Of the 35 subjects, 10 Mexican nationals were specifically charged with the March 2010 murders in Juarez, Mexico of a U.S. Consulate employee and her husband, along with the husband of another consulate employee.

The indictment was announced today at a press conference in Washington, D.C., by U.S. Attorney General Eric Holder, FBI Executive Assistant Director Shawn Henry, and other representatives. All commented on the cooperation American officials received from their Mexican counterparts. Said Henry, “We may stand on opposite sides of the border, but we stand together on the same side of the law.” 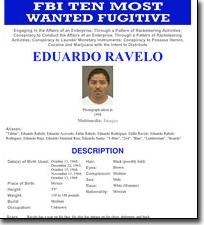 Barrio Azteca leader Eduardo Ravelo was added to the Ten Most Wanted list in 2009.

Seven of the 10 charged with the U.S. Consulate murders —and two other indicted defendants—are in custody in Mexico. Three remain at large, including Eduardo Ravelo, currently one of the FBI’s Top Ten Most Wanted Fugitives. We’re offering a reward of up to $100,000 for information leading directly to his arrest.

The Barrio Azteca began in the late 1980s as a prison gang but has since expanded into a transnational criminal organization with approximately 3,500 members, including 600 active members located in West Texas and Juarez, Mexico. Barrio Azteca gang members can also be found throughout state and federal prisons in the U.S. and Mexico.

This particular organization is known to engage in criminal activities both inside and outside of prison walls. Those activities include murder, assault, threats of violence, extortion, money laundering, witness intimidation, illegal firearms possession, alien smuggling, and drug trafficking—on both sides of the U.S.-Mexico border.

According to today’s indictment, the Barrio Azteca formed an alliance with the Vicente Carrillo-Fuentes (VCF) drug trafficking organization in Mexico, conducting enforcement operations against VCF rivals and receiving “discounts” on illegal drugs from the VCF.

And in addition to the consulate murders, the defendants are allegedly responsible for a number of other murders in the U.S. and Mexico. The indictment states they also imported heroin, cocaine, and marijuana into the U.S. and charged a “cuota,” or tax, on businesses and other criminals operating on their turf. The funds raised by these taxes were allegedly funneled into prison commissary accounts of gang leaders and also helped pay for defense lawyers.

Today’s indictment is a direct result of the cooperation among the local, state, and federal law enforcement agencies and prosecutors involved. Members of our multi-agency Safe Streets Task Forces out of our El Paso and Albuquerque offices worked seamlessly with one another throughout the investigation, sharing intelligence, conducting surveillance, making undercover drug buys, and executing search warrants.

The use of Safe Streets Task Forces is part of our strategy for going after these violent criminals—we currently have 168 Violent Gang Task Forces and 41 Violent Crime Task Forces nationwide. Also valuable is our ability to use federal statutes, because they often result in longer sentences and allow us to seize and forfeit assets from convicted gang members. And targeting the leadership of these criminal groups often disrupts their ability to ply their illegal trade.

Hopefully, with today’s indictment and arrests, the streets on both sides of the border are a little safer.

Inside the case of an unlicensed money transmittal business that moved more than $172 million.