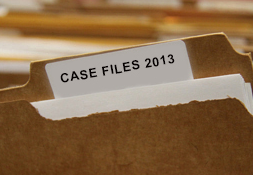 With our partners in the law enforcement and intelligence communities, the FBI worked thousands of investigations during 2013, from cyber crimes to espionage and multi-million-dollar fraud schemes. As the year draws to a close, we take a look back at some of 2013’s most significant cases.

Silk Road seizure: In October, $28 million worth of virtual money called bitcoins was seized from the owner and operator of the Silk Road website—an illegal global cyber business designed to broker criminal transactions.

Navy Yard tragedy: In September, the FBI responded to the shootings at Washington’s Navy Yard and later released its findings about the shooter, Aaron Alexis, along with photos and video.

Operation Cross Country: In July, 105 juveniles were recovered—and more than 150 pimps arrested—in the seventh nationwide operation targeting underage prostitution. The three-day sweep took place in 76 cities and was carried out by the FBI in partnership with local, state, and federal law enforcement agencies and the National Center for Missing & Exploited Children as part of the Bureau’s Innocence Lost National Initiative.

Drug trafficking, money laundering: In May, four individuals were convicted in a sophisticated conspiracy to launder millions of dollars in illicit Los Zetas drug trafficking proceeds by purchasing, training, breeding, and racing American quarter horses in the U.S.

Credit card scam: In February, 18 individuals were charged for allegedly creating thousands of phony identities to steal at least $200 million in one of the largest credit card fraud schemes ever charged by the federal government.

Alabama bunker standoff: In January, a man held a 5-year-old boy captive for nearly a week in an underground bunker in Alabama. Working together with state and local law enforcement, members of the FBI’s Hostage Rescue Team eventually entered the bunker and rescued the child.

Cyber crime: In January, three alleged international cyber criminals were charged in New York with creating and distributing the potent Gozi virus, which infected more than a million computers worldwide and caused tens of millions of dollars in losses.

They may seem like a good deal, but knockoff products can put your health at risk.