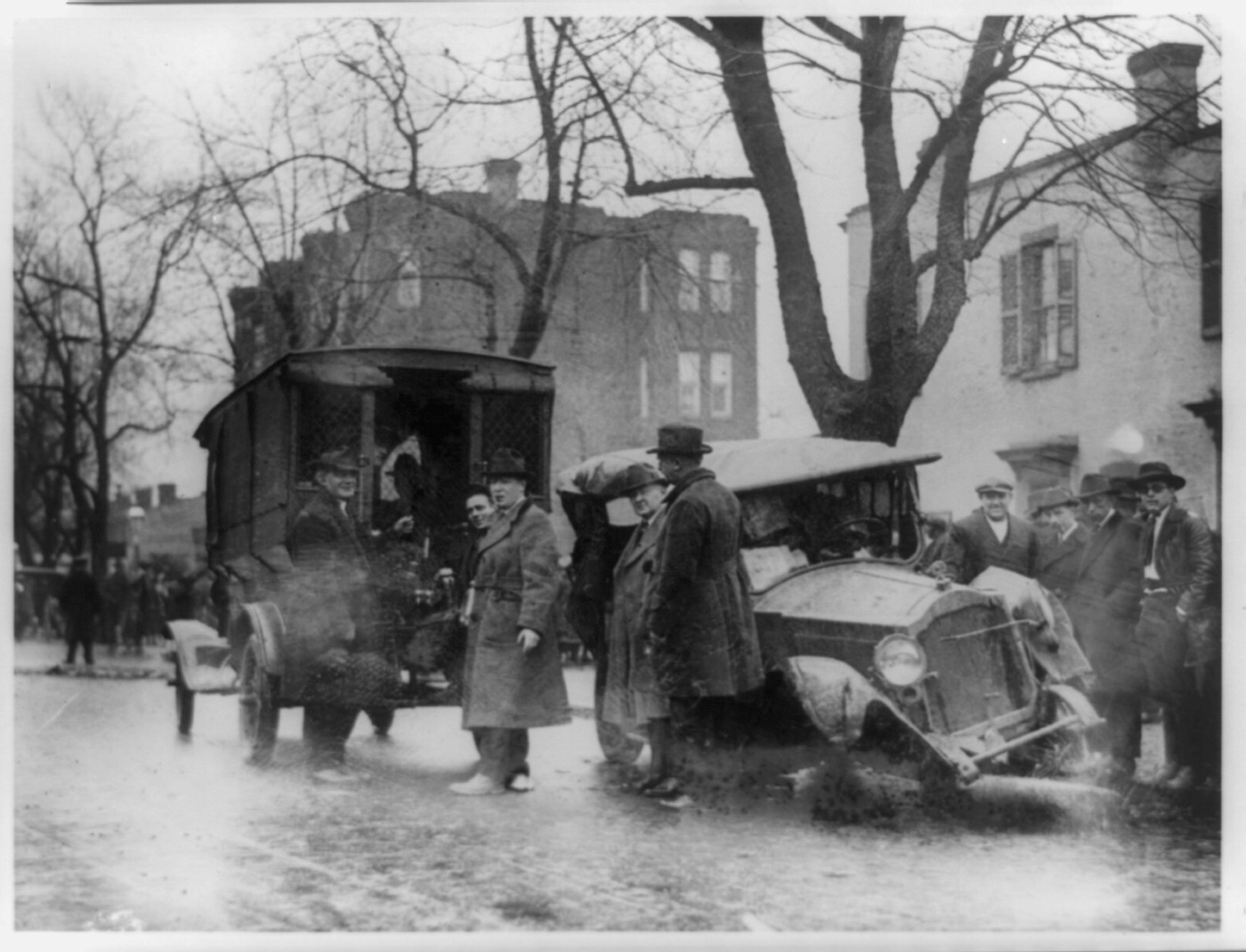 Capitol Police catch up to bootleggers in a 1922 car chase. Photo credit: Library of Congress.

For some, it was the start of a “great experiment” that would free society from the ills of demon alcohol. For other Americans, it was a time to mourn the loss of an integral part of their lives and social cultures.

For another group—those willing to violate the law—Prohibition was a chance to grow rich and live the high life at the expense of law and order.

A century ago this January, the Volstead Act authorized the federal government to ban the manufacture and sale of intoxicating beverages.

The Bureau of Investigation (BOI)—the FBI’s predecessor—had already been investigating certain liquor-related matters. During World War I, the Bureau helped enforce the Selective Service Act, which included sections aimed at keeping American soldiers dry so they would be fit for fighting. In the Alaskan territories, the BOI worked with Canadian law enforcement to intercept smuggled booze. And as the Volstead Act started to go into effect, it pursued these new criminal violations as well.

By the end of the first six months of Prohibition, BOI special agents had conducted investigations that led to the arrests of 269 people for violations of federal prohibition laws and reported an additional 334 possible violators to the Bureau of Internal Revenue for further investigation.

Over the next several years, the BOI found that prohibition violations often involved other crimes. In one case, the Detroit Field Office investigated a Michigan sheriff’s office where four deputies and two former deputies participated in a fake raid to steal bootlegged alcohol for themselves. Bureau agents secured their arrest—and a large supply of contraband booze smuggled in from Canada. All the deputies received fines and jail time.

The Bureau’s emergency role in enforcing the Volstead Act also led to significant cases. In Savannah, over the course of 1922, more than 50 agents were called in to investigate a large-scale conspiracy to violate prohibition laws. By the summer of 1924, 142 people had been sentenced for criminal violations related to the case.

By the end of the first six months of Prohibition, Bureau of Investigation special agents had conducted investigations that led to the arrests of 269 people for violations of federal prohibition laws.

The BOI also found that when they investigated the ownership of cars seized in bootlegging operations, some of the cars had been stolen. And of all the criminal matters linked to prohibition, fugitives were the most significant concern as the Bureau worked with the U.S. Marshals and others to track bootleggers who went on the lam.

Impersonation of a federal officer was another problem as criminals would sometimes represent themselves as federal officers to extort money or otherwise threaten their fellow-criminals or members of the general public. A few deeply corrupt individuals, like Gaston Means, used their legitimate connections to the federal government to conduct criminal work.

Means had a long record of unsavory and unlawful actions even before Prohibition—he was accused of spying for Germany, he was suspected of murdering a widow and forging her will (which left him a sizable inheritance), and he was a close and shady confidant of U.S. Attorney General Harry Daugherty. 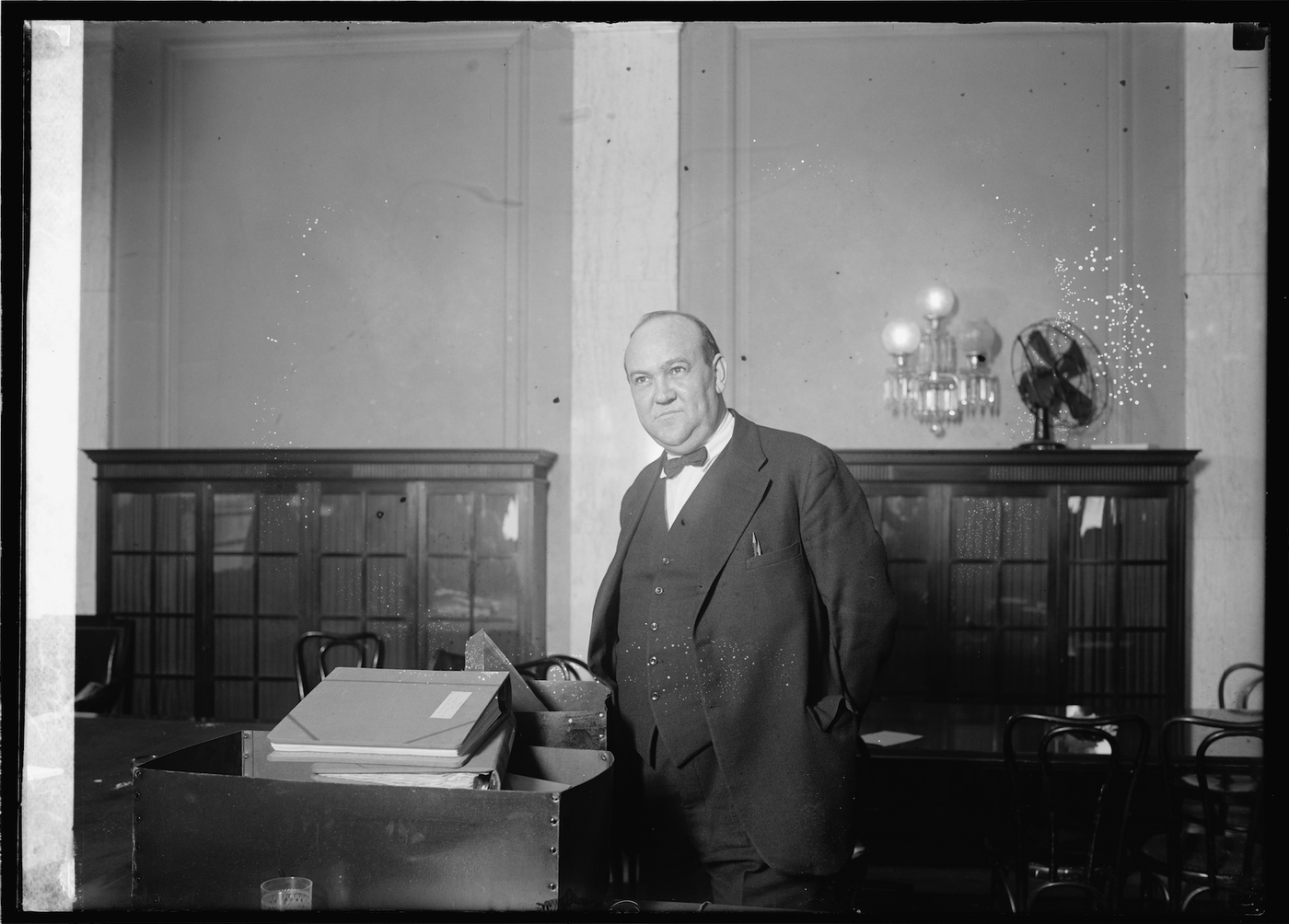 With this connection, Means became a Bureau agent in 1921 and was soon using his position to extort significant sums of cash from bootleggers in return for promises of using his influence to get them out of jail. When J. Edgar Hoover took over in the Bureau in 1924, Means was shown the door. He came back to the Bureau’s attention in 1932, though, when he swindled a wealthy Florida woman. His false promise to her to find Charles Lindbergh’s son, who was kidnapped in March of that year, landed him in to jail.

In 1927, Congress moved prohibition enforcement to the Department of Justice, creating a Bureau of Prohibition that stood apart from the Bureau of Investigation. Although better organized, this new law enforcement body struggled to keep up. Too many people wanted a drink, too many people were willing to supply that drink, and too much violence and corruption followed.

Prohibition agents like Eliot Ness sought to bring down the bootleggers but had limited success. Despite Ness’ famed hunt for Al Capone, it was the IRS that arrested the notorious bootleg king of Chicago. The Bureau played a minor, but important, role in the matter, too.

At the end of 1933, Congress passed the 21st Amendment to repeal prohibition. The Bureau of Prohibition, with its more than a thousand investigators, was no longer needed. The attorney general considered integrating them into the Bureau of Investigation, but Hoover convinced him that such a move would destroy the BOI and the work it had made to reform itself since the problematic days of the mid-1920s.

And Ness? Like his fellow prohibition agents, Ness was offered the chance to apply to Hoover’s Bureau. And, like his fellow-agents, he was told that he would have to start as a new agent and complete the extensive required training.

Ness, understandably, wanted to enter BOI in a leadership role, but when he was overheard trying to see if political supporters in Washington would back his plea, Hoover marked his application “unacceptable."﻿

A leader of a business email compromise ring that stole more than $120 million from two American companies is spending time behind bars. Learn how to protect yourself from this growing crime.

According to the FBI's Preliminary Semiannual Uniform Crime Report, both violent crime and property crime decreased in the first half of 2019 compared to the same time frame in 2018.