The tip came to an FBI agent regarding the drug trafficking activities of a violent Honduran street gang in New Orleans: A large shipment of cocaine ultimately bound for the U.S. was about to leave Costa Rica destined for Honduras.

That information was relayed to FBI personnel at the Joint Interagency Task Force South (JIATF-S) in Key West, Florida, a multi-agency, international alliance whose mission is to cover 42 million square miles of territory primarily in Central and South America to stem the flow of illegal drugs and to disrupt and dismantle sophisticated narco-trafficking networks. Much of that work is carried out on the high seas.

The Honduran traffickers had set out from Limón, Costa Rica. Their “go-fast” boat—a small, low-profile vessel favored by smugglers—was packed with 300 kilos of cocaine and a cache of military-grade weapons, including M16 rifles and grenade launchers.

When intelligence sources confirmed that the boat was in the water, officers on the watch floor at JIATF-S requested that the U.S. Navy launch a P3 surveillance aircraft to locate the smugglers, who were making their way up the east coast of Nicaragua toward Honduras. Because there were no U.S. Coast Guard cutters in the vicinity to make an interdiction, the watch floor commander called the Honduran liaison officer assigned to JIATF-S and asked for assistance.

In a matter of hours, radar-equipped Honduran aircraft had taken over tracking the vessel and Honduran navy patrol boats were under way. As the navy interceptors closed in, the four smugglers beached their craft and ran into the jungle, firing on their pursuers as they fled. In the end, the criminals were apprehended, along with the drugs and weapons. The four are currently imprisoned in Honduras.

Watch how the FBI plays an integral role in the multi-national effort to stem the illegal flow of drugs, much of it bound for the U.S. Transcript | Download

From a single piece of intelligence provided to the FBI in New Orleans, an international response was quickly set in motion that kept a large quantity of drugs from entering the United States. At JIATF-S, scenarios like this play out nearly every day.

Since its creation nearly three decades ago, the task force—composed of every branch of the U.S. military, U.S. federal intelligence and law enforcement agencies, and 15 partner nations whose liaison officers work side by side—has proven to be remarkably successful in the fight against the illegal drug trade.

“If you take the average price of a kilo of cocaine on Main Street USA,” said Coast Guard Rear Adm. Christopher Tomney, JIATF-S director, “we have taken more than $6 billion worth of illicit profits out of the system. We’re talking hundreds of tons of cocaine that have been intercepted.”

The challenges posed by narco-traffickers, however, remain enormous. “The threats we go against know no boundaries,” Tomney said. “These are threats that affect multiple agencies and multiple nations. It not only takes a whole government approach to go after these problems, it really takes a whole hemisphere approach.”

The task force succeeds by integrating intelligence gathering and sharing with streamlined and highly coordinated tactical operations. Partner nations significantly extend the reach of U.S. capabilities. Everyone works toward the common goal of stopping the illicit drug trade. As one task force member noted, “We all take the field as one team.”

Using intelligence largely supplied by the FBI, the task force detects and monitors the go-fast boats and difficult-to-detect semi-submersible vessels used by traffickers. Then, military and law enforcement personnel from the U.S. and partner nations step in to carry out the interdictions and arrests. 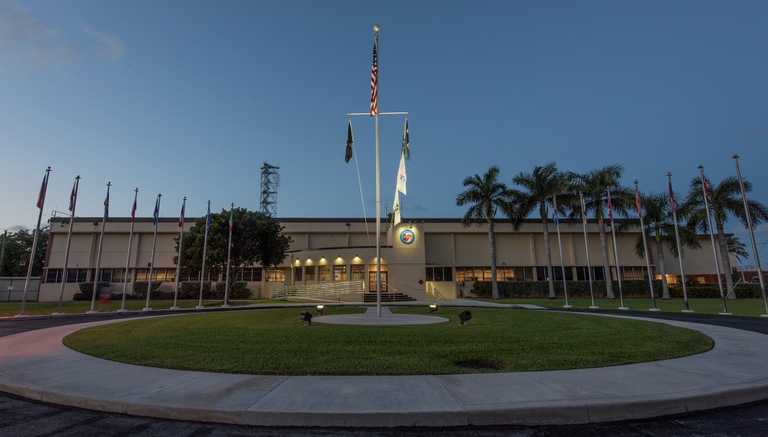 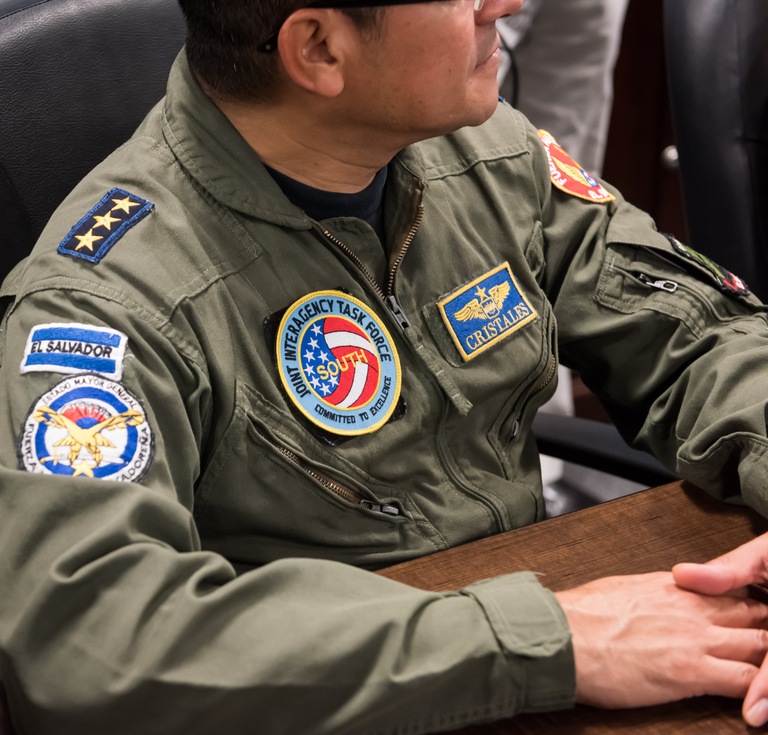 This "go-fast" boat seized by law enforcement is typical of vessels used by drug traffickers to smuggle their illicit cargo. 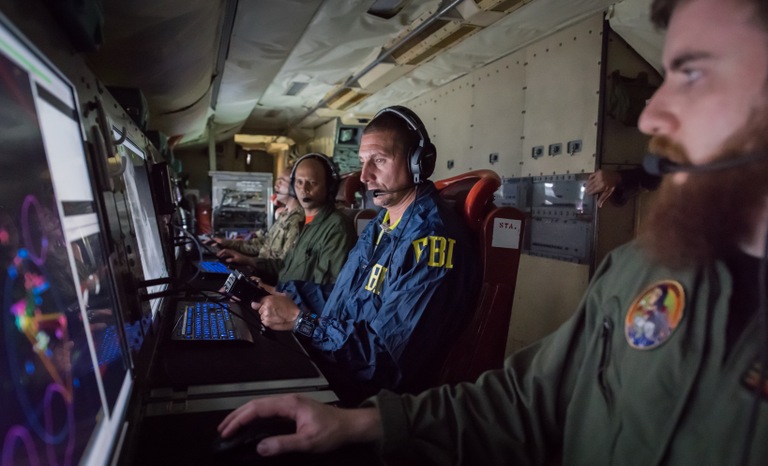 The Joint Interagency Task Force South, or JIATF-S, is located within a naval air station on Key West, Florida. The task force, created nearly three decades ago, is composed of every branch of the U.S. military, U.S. federal intelligence and law enforcement agencies, and 15 partner nations.

Using intelligence largely supplied by the FBI, the task force detects and monitors vessels used by traffickers. Then, military and law enforcement personnel from the U.S. and partner nations step in to carry out the interdictions and arrests 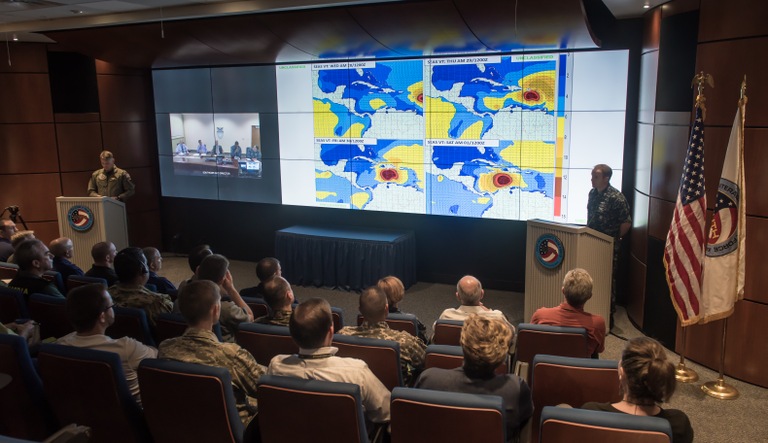 “It starts with narcotics, but the criminal networks are also smuggling weapons, bulk currency, trafficking humans, and using sophisticated money laundering techniques,” said FBI Unit Chief Brett Chianella, who heads the Bureau’s staff at JIATF-S. “Those networks are organized, armed, and well-financed, and they have ties to corrupt public officials and even foreign terrorist fighters,” he added. “The drugs are one spoke in the wheel of all this organized crime activity.”

One of the task force’s priorities is to stop the flow of drugs at their source of supply rather than after the contraband enters the U.S. and is distributed. “Either you deal with it 1,500 miles away or you deal with it after it crosses our borders,” said Chianella, who was recently appointed a JIATF-S vice director (see sidebar below).

Partner nations send their best and brightest officers to work at the task force for one- and two-year assignments, and when they return to their home countries—often to assume leadership positions in their organizations—they have built lasting relationships with their fellow liaison officers and U.S. contacts.

Lt. Col. Gustavo Alvarez, a Honduran Army officer, had just arrived in Florida as the JIATF-S liaison officer in March 2015 when he assisted with the FBI case out of New Orleans. He saw firsthand how the task force model of integrating intelligence and operations gets results.

“One of the biggest takeaways when you come here,” he said, “is that the foreign liaison officers are all just a few steps away, one office to the other.” That means information flows into the task force, Alvarez said, “but it also starts going between the other countries of interest. So the information flow really grows exponentially.”

Cmdr. Jose Jose-Vasquez, a JIATF-S liaison officer from the Dominican Republic Navy, agreed. “If I have to make a contact with the Colombian liaison, for example, I just have to look in the office. I don’t need a passport or a visa or a diplomatic procedure. In a matter of minutes, we have the information needed to be successful.”

"This task force is all about helping to bring stability to the region," says JIATF-S Director Christopher Tomney.
Transcript | Download

Gerry Canavan, an FBI analyst, talks about the importance of seizing large drug shipments because they are often accompanied by trusted members of the criminal networks.
Transcript | Download

Where drug traffickers are concerned, minutes can make a difference. On the JIATF-S watch floor any time of day or night, targeting officers and intelligence analysts may be tracking dozens of vessels on the vast Pacific Ocean or Caribbean Sea suspected of carrying cocaine and other contraband. They must decide how to deploy limited military resources to track these vessels and to target them for interdictions.

Self-propelled semi-submersible craft (SPSS) are the most highly prized catches because they carry the most drugs, anywhere from eight to 10 metric tons of cocaine—that’s roughly $300 million in street value. But these vessels are designed for stealth, with very little of the craft showing above the water line.

“It’s very difficult to find them on radar, said Gerry Canavan, a retired Coast Guard officer who joined the FBI as an analyst helping to target vessels suspected of carrying drugs. “If it’s not flat and calm, the radar probably isn’t going to pick up an SPSS,” he said. The task force has other technical means at its disposal, but intelligence gained through human and other sources is critical to the process. 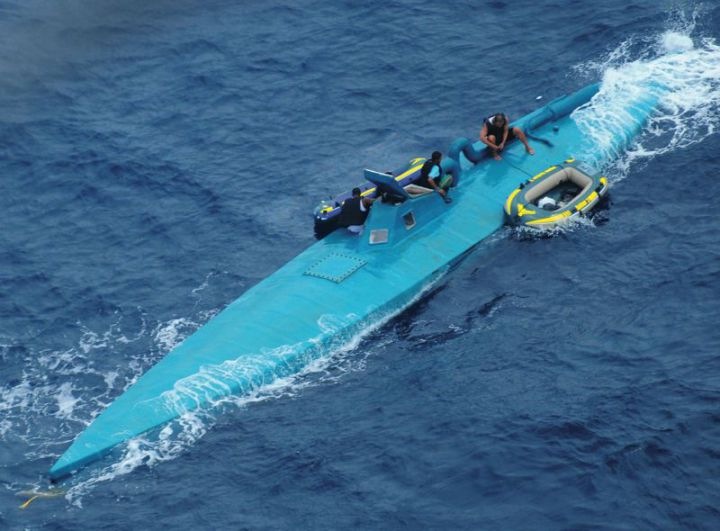 The crew of a self-propelled semi-submersible (SPSS) vessel prepares to abandon their boat before being intercepted and detained by the Coast Guard northwest of the Colombia-Ecuador border in 2009. (U.S. Coast Guard photo)

“The FBI doesn’t have planes or ships at JIATF-S,” said Kevin Lopez, also a former Coast Guard officer who joined the FBI to work on the task force. “The Bureau provides information that will help the task force position its aircraft and ships to locate that go-fast or SPSS.”

As successful as JIATF-S has been, Chianella and others estimate that the drugs interdicted annually represent only about 20 percent of the total amount being smuggled into the U.S. “As long as there’s a demand for cocaine or any illicit contraband in the United States,” he said, “the cartels and criminal networks will find a way to move their product.”

The drug trade, added the Dominican Republic’s Jose-Vasquez, “is like an energy—you cannot destroy it; it only transforms in another manner. This problem is a reality that we have and that we have to work against,” he said. “Working together makes us stronger. Being in this organization provides us with better tools to work against these common threats.”

“We are fighting a transnational threat,” JIATF-S Director Tomney explained. “No one nation, including the United States, has all the tools, all the capabilities, and all the resources to go it alone. By working together,” he said, “we can bring stability to the region and keep more than drugs in check.”

‘A Seat at the Table’ 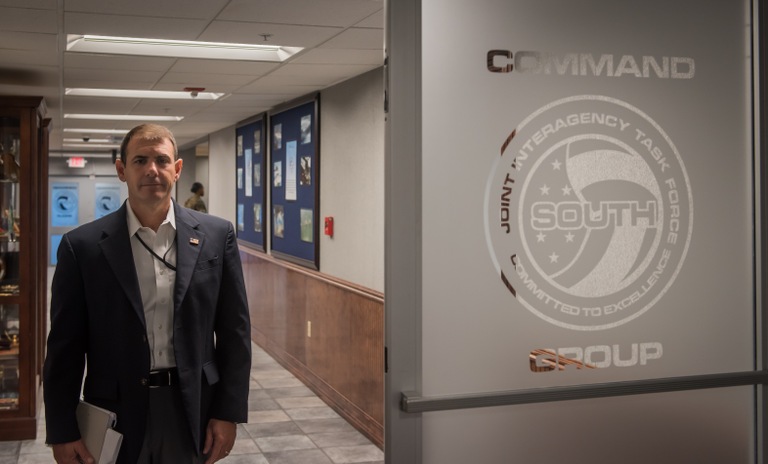 In December 2015, Special Agent Brett Chianella, who leads the FBI’s team at JIATF-S, was appointed vice director of the task force—the first FBI fully integrated Department of Defense position. Chianella’s new role is meant to further leverage the Bureau’s intelligence gathering abilities and to acknowledge the important role the FBI plays in the continuing success of the task force.

The position underscores how unified the FBI is with the Department of Defense in carrying out the task force’s mission—to monitor and detect the most violent illicit traffickers in the Western Hemisphere and to disrupt and dismantle transnational criminal organizations.

“This has been a win-win proposition,” said Rear Adm. Christopher Tomney, JIATF-S director. “The FBI vice director provides key insights and experiences that I just don’t have as a senior Coast Guard officer. Nowhere in the command group, because we are such a melting pot of organizations, do we have that senior Department of Justice investigatory experience.” The vice director position, he added, will be “completely woven into the command structure of this organization.”

“The FBI and the military share the same philosophy on combating transnational criminal networks and organized crime,” Chianella said. “To have the FBI fully integrated within the Department of Defense to disturb and dismantle violent networks supports a whole of government approach and takes the fight to them, before it affects us at home.”

“To have the FBI fully integrated within the Department of Defense to disturb and dismantle violent networks supports a whole of government approach and takes the fight to them, before it affects us at home.” 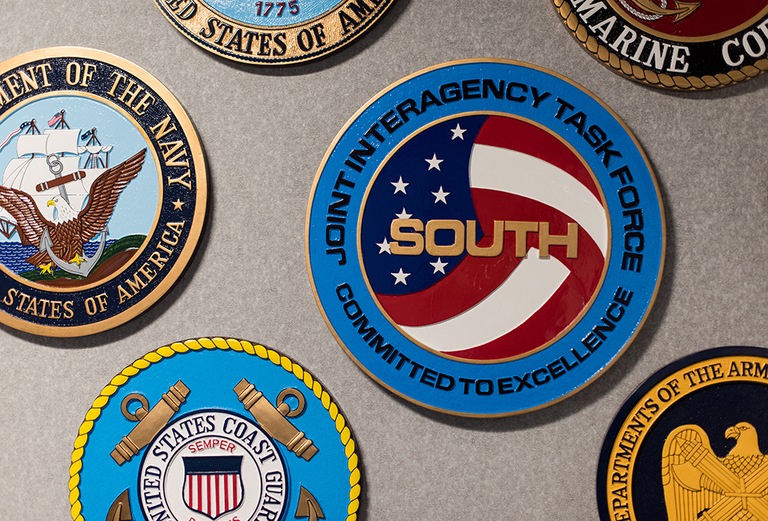 The Joint Interagency Task Force South (JIATF-S) was created in 1989 to monitor and detect narco-trafficking and to disrupt and dismantle the criminal organizations that profit from the illicit drug trade. The Department of Defense-funded operation, which falls under the military’s U.S. Southern Command, has responsibility for 42 million square miles of territory in the Western Hemisphere.

The FBI and its partners dismantled a highly secure infrastructure of servers that offered cyber criminals an unfettered platform from which to conduct malware campaigns targeting victims around the world.

Update: Marlon Jones, a Jamaican man charged with murdering four people during a bloody gun battle in a Los Angeles suburb, was apprehended one day after his addition to the FBI's Ten Most Wanted Fugitives list.