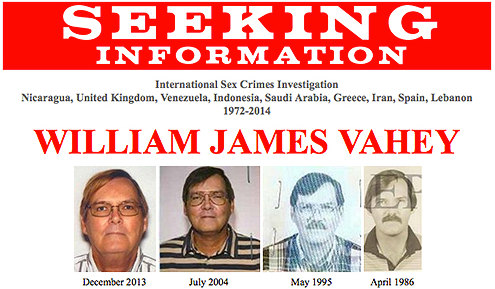 The FBI is asking for the public’s help to identify victims of a suspected serial child predator who taught in private American schools overseas in nine different countries beginning in 1972 and whose young victims—believed to be boys between the ages of 12 and 14—may be unaware of what happened to them.

William James Vahey, a 64-year-old U.S. citizen who was jailed in California in 1969 for child molestation, committed suicide last month days after his employer saw a thumb drive belonging to him that contained pornographic images of boys who were likely drugged. At the time, Vahey was teaching ninth-grade world history and geography at the American Nicaraguan School in Managua.

When confronted about the images by a school administrator, Vahey confessed that he was molested as a child and had preyed on boys his entire life, giving them sleeping pills prior to the molestation.

The thumb drive contained sexually graphic images of at least 90 victims, according to Special Agent Patrick Fransen. The photographs were cataloged with dates and locations that corresponded to Vahey’s overnight field trips with students beginning in 2008. However, the investigation has revealed that Vahey accompanied students on similar trips throughout his career.

Fransen, a 16-year FBI veteran who specializes in crimes against children, noted that Vahey had been teaching at American schools overseas since the 1970s. “I’m concerned that he may have preyed on many other students prior to 2008,” he said. “I’ve never seen another case where an individual may have molested this many children over such a long period of time.”

At this point in the investigation, photographed victims are being identified and notified. Those who believe they may have been victims are being encouraged to come forward—not only to aid investigators but potentially to seek services through our Office for Victim Assistance. A confidential questionnaire is available for anyone who thinks they may have been victimized by Vahey or who may have information about his predatory behavior.

In addition to teaching, Vahey coached boys’ basketball teams at several of the schools where he taught. The popular and highly respected teacher regularly organized overnight field trips and coordinated itineraries that included boys’ room assignments.

“He had access to children because of his position of trust,” Fransen said. “He created a system that gave him the opportunity and the means to molest children. The manner in which he committed these acts—while the boys were unconscious—may have inhibited them from knowing what happened, making it impossible for them to come forward at the time of the molestation.”

By his own admission, Vahey used sleeping pills to drug his victims, but investigators want to learn more about his methods and what drugs he may have used. They are hopeful the public can assist them.

Vahey traveled extensively over the past four decades, teaching at American schools in Nicaragua, the United Kingdom, Venezuela, Indonesia, Saudi Arabia, Greece, Iran, Spain, and Lebanon. His victims are multinational. In addition to foreign nationals, the schools were attended by the children of American diplomats, military personnel stationed overseas, and other American citizens working abroad.

As the investigation unfolds, the FBI continues to work with our international partners in the affected countries through our legal attaché offices and the U.S. Department of State. “At this time, investigators have no knowledge that Vahey shared or traded any of the pornographic material he made,” Fransen said. “But his suicide left a lot more questions unanswered than answered.”

Inside the case of a Virginia con man who targeted military personnel and their families.

The Gangs of Los Angeles, Part 6

Our series ends with a closer look at an FBI agent who is dedicated to making a difference.