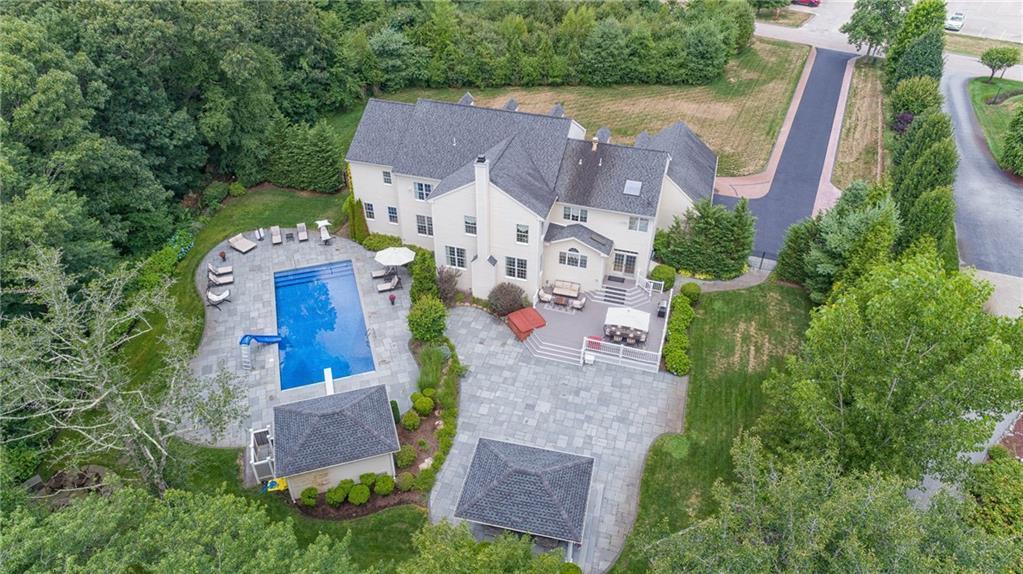 Monique Brady's house in East Greenwich, Rhode Island. Prosecutors said fraud proceeds paid for the home's $9,400 per month mortgage, with a total of $342,243 in mortgage payments made during the scheme.

A Rhode Island woman who preyed on the trust of friends, family, and neighbors in a dubious investment scheme—one that gilded her reputation and lifestyle while fleecing her victims of $4.8 million—was sentenced this month to eight years in prison. She was also ordered to pay back her victims.

Monique Brady pleaded guilty last July in federal court to running a fraud scheme prosecutors have described as “reprehensible,” “insidious,” and “depraved.” Brady, 45, of East Greenwich, claimed her property preservation company, MNB, had contracts to rehabilitate New England properties. She said she needed investments of $20,000 to $80,000 to pay subcontractors to perform the work. In return, investors were promised a 50-percent yield once the rehabilitation work was complete.

In the end, investigators determined it was all a $10 million charade. There were no large-scale property rehabs and only a few legitimate low-dollar contracts—almost all the money was used to prop up Brady’s Ponzi scheme and support a lavish lifestyle on the backs of friends who thought they knew her.

“She had lifelong friends who were just totally and completely betrayed by her,” said Pepper Daigler, a special agent in the FBI’s Boston Field Office who worked with Internal Revenue Service special agents on the case.

Brady’s victims—among them, multi-millionaires, firefighters, young, and elderly—represented a cross-section of the tony community 30 minutes south of Providence. Most had a very close connection to Brady. Investigators identified 23 individuals who lost their investments in the scheme, which encouraged investors to roll over purported gains to increase their stakes and potential windfalls. Some lost everything in the scam, which went on for at least four years before Brady was arrested on April 25, 2019, as she prepared to flee the country.

“She had life-long friends who were just totally and completely betrayed by her.”

“The burden of this loss is nearly impossible to put into words,” said one victim, identified as J.L., a week before Brady’s February 11 sentencing. “The stress my family has endured is beyond measure. Even my children’s futures are altered forever.”

The scam came to light after the IRS criminal investigators discovered inconsistencies between Brady’s spending and her business. That led to closer forensic analysis and then a deeper dive into financial records that showed repeated deposits of large checks, including some for $50,000 or $60,000. The high-dollar figures are not that unusual in real estate, where flipping houses and extensive remodels can reach into six figures. But the sham fell apart quickly when federal agents began interviewing Brady’s “investors.”

“That’s essentially where the wheels came off for her,” said Special Agent Mark Homsi of the IRS Criminal Investigation Division. “We were presenting them with records from these vendors where she did little or no actual work and they are providing us with these promissory notes for $50,000 or $60,000 investments. That was really the turning point—the interviews with these people.”

A 67-year-old victim with a quadriplegic husband and elderly parents with Alzheimer’s and dementia said in a statement to the court that she lost both her life savings and her parents’ savings to Brady’s ploy.

“I cannot articulate the guilt that haunts me for having made such an irresponsible decision that was grounded in emotion instead of common sense,” L.R. said in a victim impact statement. “Monique was fully aware of who I was as a caregiver, and she exploited that knowledge for her own selfish and criminal gain.”

In all, the self-styled preservation expert solicited investments for projects on 171 properties; no work was ever performed on 98 of those. Prosecutors said Brady’s conduct was as bad as they have ever seen in a Rhode Island fraud case. Brady even continued her scheming while incarcerated and awaiting sentencing, according to a February 6 sentencing memorandum. Her misconduct included making more than 200 unauthorized phone calls from prison using other inmates’ personal identification numbers.

Investigators said Brady’s case is a cautionary tale for anyone considering a get-rich-quick scheme. Her victims thought she was their friend and that she was doing them a favor—letting them in on something too good to pass up. But in this case, it was all too good to be true.

IRS Agent Homsi said Brady’s affluent friends were just as taken in as those who could least afford it: “Oftentimes, these are people who are very successful in the business world. And they would say, ‘If it wasn’t Monique, I would have done much more due diligence.’ But they just had that implicit trust in her.”

Meanwhile, the investments were paying for Brady’s extravagances, including a $9,400 monthly mortgage; trips to the tropics, Europe, multiple Super Bowls; a luxury shoe collection; and elective plastic surgery that she paid for in cash.

It wasn’t until the scheme fell apart that its breadth became apparent. Evidently, Brady encouraged secrecy among her investors—another common ploy of scam artists and Ponzi schemes. She eschewed talking business in social settings, said FBI Special Agent Daigler. Potential investors might have seen that as a sign of class, while others might see a potential red flag.

“I guess if somebody tells you to keep a secret, always be weary of why you have to keep it a secret,” Daigler said.

“Oftentimes, these are people who are very successful in the business world. But they just had that implicit trust in her.”

A man and woman who targeted and violently robbed seven senior citizens in West Virginia, Virginia, and Tennessee have been convicted and sentenced to lengthy prison terms.

For nearly a decade, the Bayrob Group infected thousands of computers with malware and stole millions of dollars from victims. But with help from private sector and law enforcement partners, the FBI shut down their criminal operation.