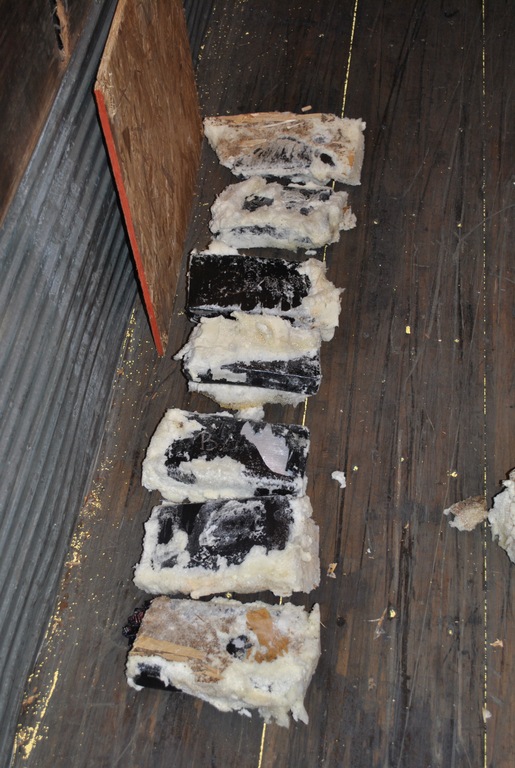 These kilos of cocaine, shipped from California to North Carolina inside containers used to package furniture, were among the drugs seized in April 2016 when members of the FBI-led Raleigh-Durham Safe Streets Task Force arrested the ringleaders of the Maurio Mitchell Drug Trafficking Organization.

One-time major suppliers of cocaine, heroin, and marijuana in North Carolina’s Triangle region will be spending decades behind bars, thanks to local, state, and federal law enforcement partners determined to stop violent gangs that profit from narcotics trafficking.

A federal judge in December sentenced the ringleaders in the case, Maurio Mitchell and Mark Daye, to prison terms of 35 years and 30 years, respectively. In all, nine members of what was known as the Maurio Mitchell Drug Trafficking Organization, dismantled in 2016, received a combined total of 119 years in prison.

“Mitchell was the architect of the organization, and Daye provided the source of supply,” said Special Agent Steve Jessup, an investigator on the case from the FBI’s Charlotte Division and a member of the FBI-led Raleigh-Durham Safe Streets Task Force.

Daye had a cartel connection in California that supplied the drugs, and Mitchell was affiliated with members of the United Blood Nation’s Omega Line, a violent street gang operating within the Raleigh-Durham area known as the Triangle. That partnership resulted in the distribution of significant quantities of illegal drugs—and violent acts that stemmed from those crimes.

“For the past five years, factions of the same Bloods gang have been fighting amongst themselves, largely over the drug trade,” said Tim Thomas, a Durham Police Department detective and task force member.

The culture of violence is so strong among rival gang factions that many have their own rap musicians who post music videos on social media platforms to intimidate and threaten their enemies. These “dis videos”—where targets were disrespected on social media—often resulted in violent encounters, Thomas said. “They were more about sending a message than music.”

“This was a great team effort. Dismantling the Maurio Mitchell organization made the community a safer place.”

The FBI case against Mitchell’s organization began in the summer of 2015 in response to a spike in gang violence in the area—the result of the Bloods’ turf wars surrounding the drug trade. In January 2016, the task force initiated a court-ordered wiretap of Mitchell and others.

The evidence revealed that the organization was receiving large quantities of cocaine in the Triangle area—much of it shipped from California in containers used to package furniture—and that gang members were being used as distributors and enforcers.

During the three months the wiretap was in place, evidence showed that Mitchell and his associates distributed 23 kilos of cocaine. When the group members were arrested in April 2016, task force members seized 7.6 pounds of cocaine and 3.5 pounds of heroin. Also seized were weapons, kilo presses—which the traffickers used to form powder cocaine into bricks—and jewelry, including a $50,000 wristwatch.

The traffickers were charged federally with a variety of drug trafficking offenses, because federal sentencing guidelines provided lengthier prison terms than state charges. The nine members of the Maurio Mitchell Drug Trafficking Organization, all convicted in 2016 and 2017, were sentenced in October and December 2017.

“A lot of these guys have been known locally to law enforcement for their criminal activity, and many have significant records,” Thomas said. “We hope the federal charges and long prison terms in this case send the appropriate message to anyone with intentions to fill the criminal void they left behind.”

In addition to FBI and Durham Police Department personnel, members of the Raleigh-Durham Safe Streets Task Force include officers from the Durham County Sheriff’s Office and the North Carolina State Highway Patrol. Also taking part in the Mitchell investigation were the Bureau of Alcohol, Tobacco, Firearms, and Explosives and the Internal Revenue Service’s Criminal Investigation division.

“This was a great team effort,” Jessup said. “Dismantling the Maurio Mitchell organization made the community a safer place.”

Phantom Secure, an encrypted communication service that facilitated organized criminal activity and drug traffickers, has been shut down thanks to an international law enforcement effort.