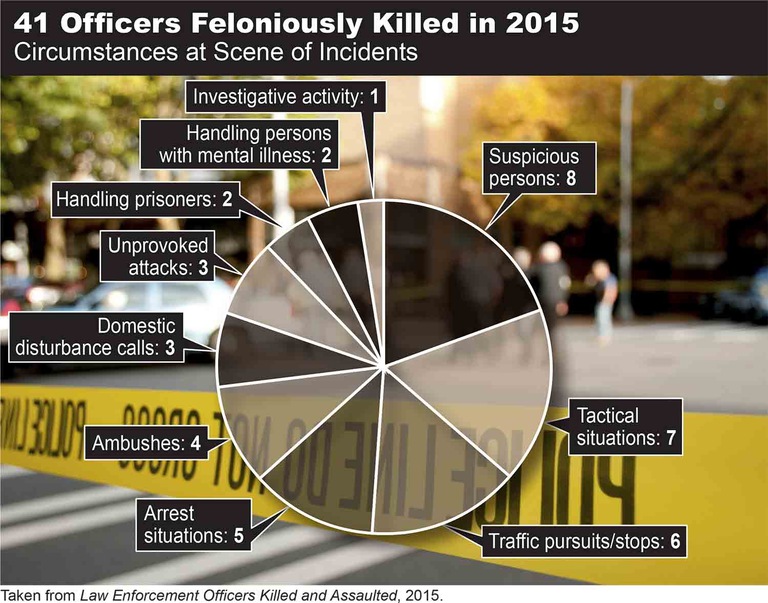 Today, the FBI released its annual Law Enforcement Officers Killed and Assaulted (LEOKA) report—this one covering the 41 felonious deaths, the 45 accidental deaths, and the 50,212 line-of-duty assaults of officers during 2015.

Among the report’s highlights:

Law Enforcement Officers Killed and Assaulted also contains a separate section on federal law enforcement officers who were killed or assaulted in the line of duty during 2015.

Effective March 23, 2016, the LEOKA Program expanded its data collection to include the data of military and civilian police and law enforcement officers of the Department of Defense (DoD) who are performing a law enforcement function/duty and who are not in a combat or deployed status (sent outside the U.S. to a specific military support role mission). This includes DoD police and law enforcement officers who perform policing and criminal investigative functions while stationed (not deployed) on overseas bases, just as if they were based in the United States. The new information will be contained in the 2016 edition of Law Enforcement Officers Killed and Assaulted, which will be released later in 2017. Read more on the criteria used to determine suitability for inclusion in the LEOKA report.

In addition to collecting details about the critical aspects of fatal confrontations and assaults—and sharing that information with our law enforcement partners, government and civic leaders, researchers, and the public in general—the FBI’s LEOKA Program conducts extensive research on the data that eventually gets incorporated into officer safety awareness training the Bureau provides.

The FBI and its partners have developed the Cyber Investigator Certification Program to help ensure first responders have a working knowledge of how to survey and secure electronic evidence at a crime scene.

The FBI’s annual law enforcement action focused on recovering underage victims of prostitution has concluded with the recovery of 82 sexually exploited juveniles and the arrests of 239 pimps and other individuals.