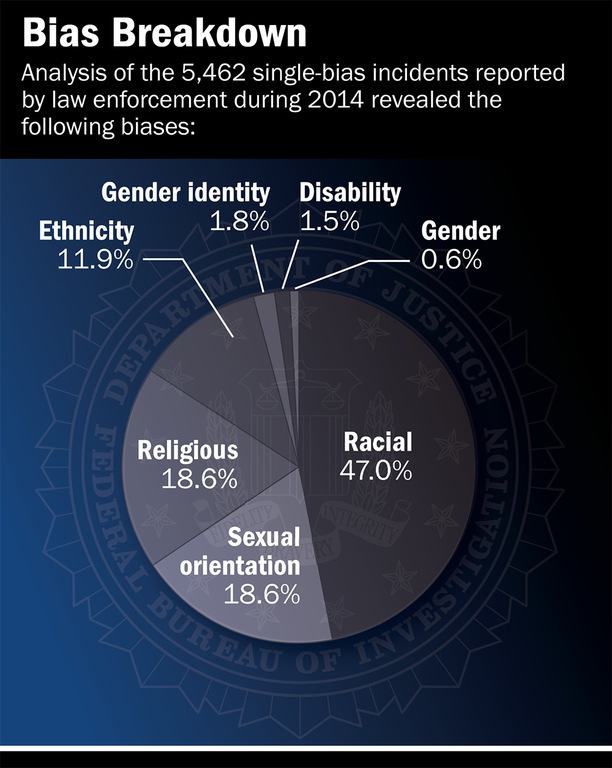 According to the FBI’s latest report, law enforcement agencies reported 5,479 hate crime incidents involving 6,418 offenses to our Uniform Crime Reporting (UCR) Program in 2014. And these crimes—which often have a devastating impact on the communities where they occur—left 6,727 victims in their wake.

The latest figures are down from 2013, when 5,928 criminal incidents involving 6,933 offenses were reported.

Hate Crime Statistics, 2014 provides information about the offenses, victims, and offenders. Among some of the highlights:

Also during 2014, law enforcement agencies reported 5,192 known offenders in 5,479 bias-motivated incidents. (In the UCR Program, “known offender” does not imply that the suspect’s identity is known, only that some aspect of the suspect was identified by a victim or witness—such as race, ethnicity, or age.)

To enhance the accuracy of hate crime reporting, representatives from the UCR Program participated in five hate crime training sessions provided jointly by the Department of Justice (DOJ) and the FBI. Since April 2015, DOJ and the FBI provided the training sessions to law enforcement agencies and community groups in several different areas of the county. UCR personnel also worked with states to ensure proper data submission and met with police agencies to provide training and discuss crime reporting issues.

In addition to releasing annual Hate Crime Statistics reports, which give the nation a clearer picture of the overall crime problem, the FBI also investigates incidents of hate crimes—as a matter of fact, it’s the number one priority within our civil rights program. We investigate hate crimes that fall under federal jurisdiction, assist state and local authorities during their own investigations, and in some cases—with the DOJ’s Civil Rights Division—monitor developing situations to determine if federal action is appropriate.

The 2016 release of the Hate Crimes Statistics report, which will contain 2015 data, will feature even more information—expanded bias types in the religion category and the added bias type of anti-Arab under the race/ethnicity/ancestry category. The collection of both types of data began in January 2015.

Building Partnerships in the Americas

Partnerships are key to combating criminal threats that spill across borders.

The FBI is now accepting applications from motivated individuals who want to embrace a challenging and rewarding opportunity to serve their country and communities.