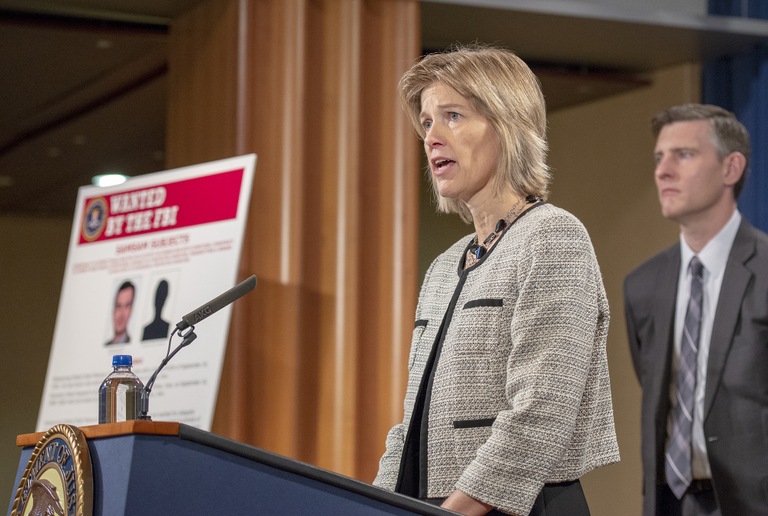 FBI Executive Assistant Director Amy Hess speaks at a November 28, 2018 press conference at the Department of Justice announcing charges against two Iranian men in connection with an international computer hacking and extortion scheme involving the deployment of sophisticated ransomware known as SamSam.

Two Iranian men have been charged with deploying a sinister type of ransomware that crippled the operations of hospitals, municipalities, public institutions, and other critical networks in the United States and Canada, officials from the Department of Justice and the FBI announced today.

Beginning in 2015 and continuing until September 2018, SamSam ransomware infiltrated computer networks in Atlanta, Newark, and San Diego, as well as those of major health care providers, the University of Calgary, and others. Once deployed, the malware encrypted data and files. The creators then demanded payment by virtual currency to restore access to affected systems, a crime Assistant Attorney General Brian A. Benczkowski called “21st century blackmail” during a press conference today at the Department of Justice in Washington, D.C.

The toll of these cyberattacks was staggering: more than 230 entities infected, $6 million in ransom payments extorted, and an estimated $30 billion in damages to the affected public and private institutions.

The case was investigated through a coordinated international effort between the FBI, the United Kingdom’s National Crime Agency and West Yorkshire Police, and Canada’s Calgary Police Service and Royal Canadian Mounted Police. Significant assistance was provided by the Justice Department’s National Security Division and the Criminal Division’s Office of International Affairs. The courage and the cooperation of the ransomware victims was also key to the successful investigation.

“Through our valued partnerships, not just with our great law enforcement partners in the U.S. and abroad but with our partners in private industry and with the victims of these crimes, we will find criminals and hold them accountable,” said Hess. “Through persistence and collaboration, we will disrupt not only the criminal activity but also the ill-gotten livelihood of these actors.”

“The actions highlighted today, which represent a continuing trend of cyber criminal activity emanating from Iran, were particularly threatening, as they targeted public safety institutions, including U.S. hospital systems and governmental entities.”

In the federal indictment unsealed in Newark, the U.S. Attorney for the District of New Jersey charged Faramarz Shahi Savandi and Mohammad Mehdi Shah Mansouri with one count of conspiracy to commit wire fraud, one count of conspiracy to commit fraud and related activity in connection with computers, two substantive counts of intentional damage to a protected computer, and two substantive counts of transmitting a demand in relation to damaging a protected computer.

Although the alleged criminal actors are in Iran and currently out of the reach of U.S. law enforcement, they can be apprehended if they travel, and the United States is exploring other avenues of recourse.

Victims were infected with the ransomware through vulnerabilities found in common software and network accesses points. Hess stressed the importance of computer security and hygiene for individuals and corporations. “We all need to do our part to make sure that our systems are as strong and secure and protected as possible,” she said.

Victims of ransomware or other cybercrimes are encouraged to contact their local FBI field office and file a complaint online with the Internet Crime Complaint Center (IC3). 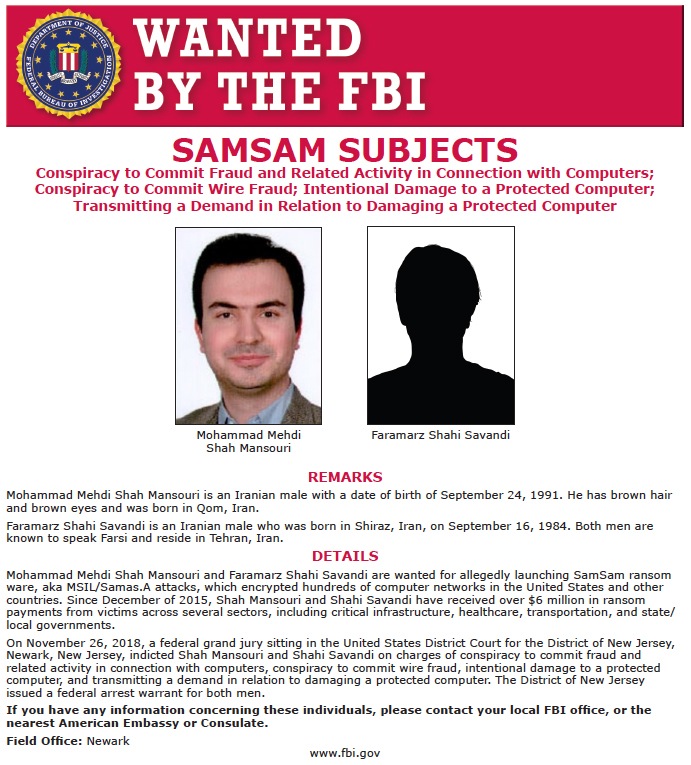 A fraudster and his associates who bought credit card numbers online and used them to buy prepaid gift cards and money orders—stealing thousands of dollars in the process—have been sentenced for their crimes.