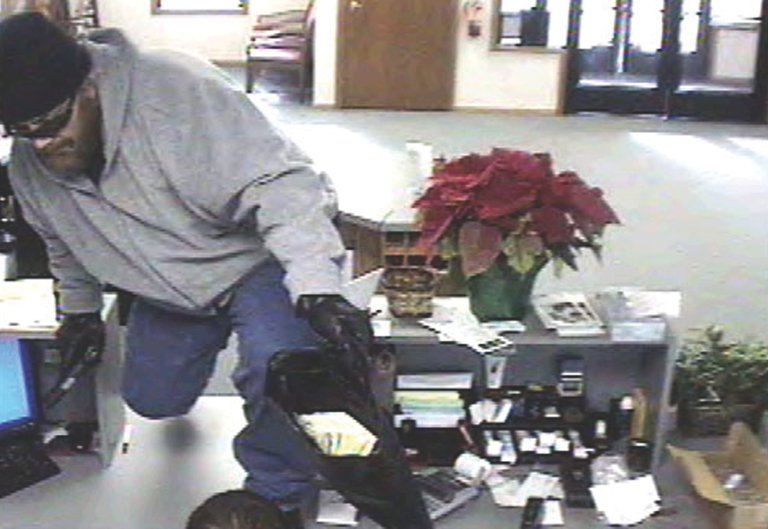 The I-35 Bandit leaps the teller counter during a bank robbery.

A high school teacher was driving down a Texas road when she glanced over to the next lane and saw a man putting on a fake beard while driving. Suspicious, she called 911—just as the man started waving a handgun at her before speeding away. Later that day, a nearby bank was robbed.

If the robbery was carried out by the I-35 Bandit, as our investigators believe, the car incident was one of only a few mistakes this serial bank robber has made during at least 15 armed heists starting as far back as 2003. 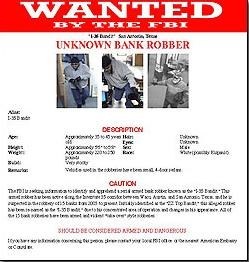 The I-35 Bandit is aggressive and considered extremely dangerous.

“What is unique about the I-35 bandit is how lucky he’s been to go this long without being caught,” said Special Agent Dennis May, bank robbery coordinator in our San Antonio Field Office. May, who has been investigating bank robberies for most of his 19 years in the Bureau, said he has never seen a case quite like this one.

The bandit, so named because his crimes occur mainly in small towns along a major interstate that runs through Texas, is a takeover-style robber. He enters banks with gun drawn and takes everyone hostage while he stuffs cash in a black bag he carries with him.

“He is very quick and usually robs every teller station,” May said. Sometimes he pulls up to the front of the bank and leaves the car engine running during the robbery.

He always wears disguises, and they are effective. The fake beard and hair, along with hats, sunglasses, and gloves obscure the robber’s face and features. “I am pretty certain that if we saw this guy standing in the parking lot five minutes after the robbery without his disguise on, we’d have no idea it was him,” May said.

That’s why we need your help. “It might take somebody coming forward,” May explained, “someone that knows this guy–a cousin, girlfriend, or estranged wife—who will call us and say, ‘I think I know who this is.’”

The suspect always wears disguises, like a fake beard and hair, hats, sunglasses, and gloves.

None of the robberies have turned violent so far, but the I-35 Bandit is aggressive and considered extremely dangerous. Here are a few details about the serial robber:

“Every bank robber is a serial robber unless you catch them,” May said. “We need the public’s help to stop this guy.”

If you have any information concerning this case, submit a tip electronically or call the FBI at this 24-hour telephone number: (210) 225-6741. There is a reward for original information leading to the identification, arrest, and conviction of the I-35 Bandit.

A $7 million fraud scheme and how a doctor allegedly pocketed $450K for bogus claims.

A search engine for law enforcement agencies is expanding nationwide this month.