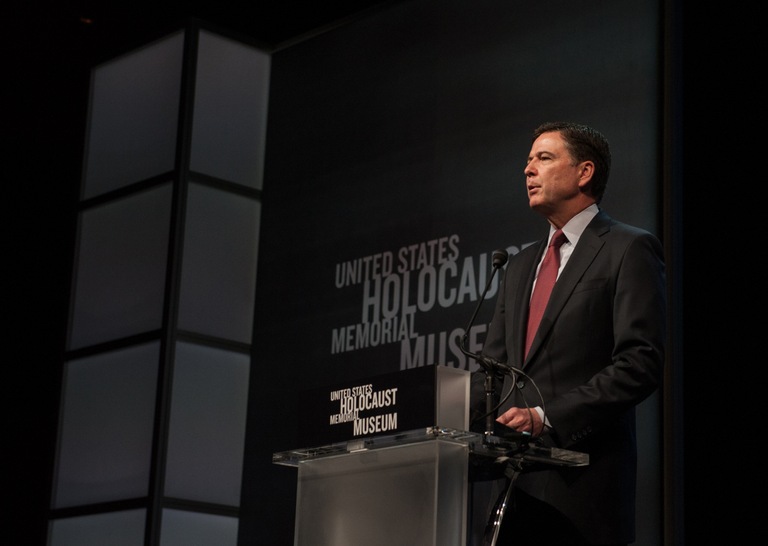 Calling the Holocaust “the most horrific display in world history of inhumanity,” FBI Director James Comey explained to an audience last night at a United States Holocaust Memorial Museum event why the Bureau’s partnership with the museum “matters so very much.”

“Our obligation is to refuse to let bad win,” Comey said during remarks at the Washington, D.C. museum’s 2015 National Tribute Dinner—one of the events commemorating the annual weeklong Days of Remembrance. “There are so many ways to fight evil to ensure it doesn’t hold the field,” Comey said. “This room is full of people who have made that fight their life’s work.”

Comey explained that he requires every new special agent and intelligence analyst to go to the museum as part of their training. “Naturally, I want them to learn about abuse of authority on a breathtaking scale,” he said. “But I want them to confront something more painful and more dangerous—I want them to see humanity and what we are capable of.”

New agents and analysts need to understand “our capacity for moral surrender,” he said. The sick, evil Nazi leaders responsible for the slaughter of millions of Jews “were joined by, and followed by, people who loved their families, took soup to a sick neighbor, went to church, and gave to charity.”

That fact, Comey said, “is the most frightening lesson of all—that our very humanity made us capable—even susceptible—of surrendering our individual moral authority to the group, where it can be hijacked by evil.”

Director Comey speaks at a memorial service marking the 20th anniversary of the bombing.