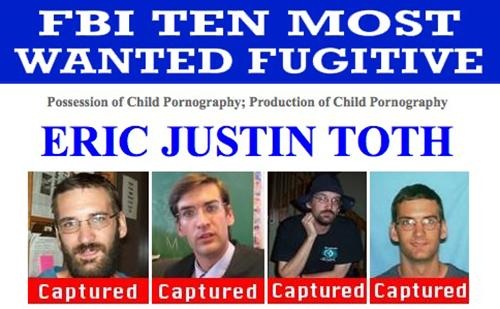 Eric Justin Toth, a former private-school teacher and camp counselor, has been on the run since warrants for his arrest were issued in Maryland and the District of Columbia in 2008.

Eric Justin Toth, a former private-school teacher and camp counselor accused of possessing and producing child pornography, is the newest addition to the FBI’s Ten Most Wanted Fugitives list.

Toth, who also goes by the name David Bussone, has been on the run since warrants for his arrest were issued in Maryland and the District of Columbia in 2008. There is a reward of up to $100,000 for information leading directly to Toth’s arrest, and we need your help to locate him.

“We have always counted on the public’s support to help capture fugitives and solve cases,” said Michael Kortan, assistant director of our Office of Public Affairs. “The addition of Eric Toth to the Top Ten list illustrates how important it is to get this individual off the streets and into custody.”

Our investigation began in June 2008, after pornographic images were found on a camera that had been in Toth’s possession at the private school where he worked. Since becoming a fugitive, he is believed to have traveled to Illinois, Indiana, Wisconsin, and Minnesota. Investigators believe he lived in Arizona as recently as 2009.

Toth turned 30 on February 13. He is 6’3” tall and weighs about 155 pounds. He has brown hair, green eyes, and a medium complexion. He has a mole under his left eye.

Toth is well educated—he attended Cornell University for a year and then transferred to Purdue University, where he earned an education degree. He is described as a computer expert and is believed to regularly use the Internet and social networking websites. He may advertise online as a tutor or male nanny.

Since its creation in 1950, the Top Ten list has been invaluable to the FBI, helping us capture some of the nation’s most dangerous criminals. Of the 495 fugitives named to the list, 465 have been apprehended or located. That level of success would not be possible without the strong support of the public, whose help has led to the capture of 153 of the Top Ten fugitives.

Over the years, we have created several digital tools to spread the word about our fugitives program, including a widget that can be added to anyone’s website or blog. The widget is an interactive application featuring information on all Top Ten fugitives, along with continuous feeds of FBI news and stories that are automatically updated. It’s easy to add to almost any website, including Facebook and other social networking sites, and it currently appears on hundreds of websites around the world.

In addition, more than 60,000 people subscribe to our Ten Most Wanted Fugitives category through e-mail updates and listen to our Wanted by the FBI podcasts. The Wanted by the FBI section on our website is viewed by over a million people every month. Also, our National Digital Billboard Initiative partners, who currently have 3,200 billboards in 42 states, are donating space to help publicize the newest Top Ten fugitive.

Our modern electronic methods allow us to reach more people than ever, but we still need your help. If you have any information about Eric Justin Toth—or any of the fugitives on our Top Ten list—please contact your local FBI office or submit a tip electronically on our website.

For a full list of the fugitives and missing persons we are looking for, please visit our Wanted by the FBI webpage.

Federal bankruptcy proceedings can be a lifesaver for honest individuals overwhelmed by debt as a result of unemployment, a medical crisis, divorce, disability, or any number of other legitimate reasons.

Homeowners tricked into signing away the deeds to their own homes. The elderly and vulnerable used to make a fast and illegal buck, even by the very people who take care of them. Billions in hard-earned investor dollars vanishing in a seeming flash, sometimes through a single scam.